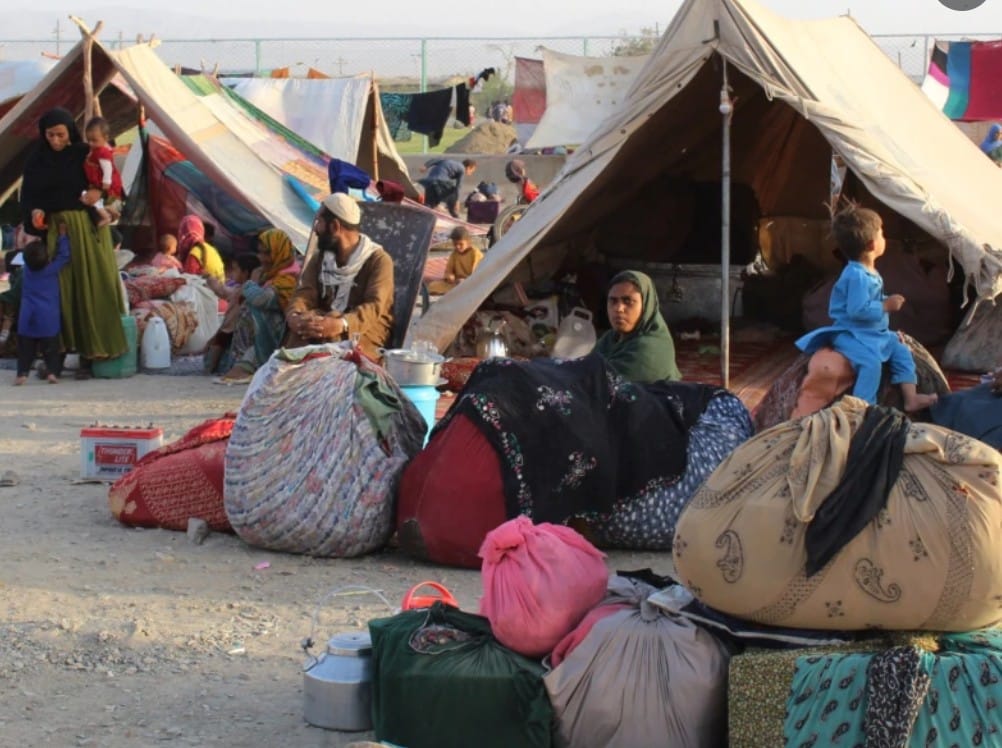 Since the Taliban came to power in Afghanistan in August, 2021, due to deteriorated economic and humanitarian conditions, tens of thousands of people, including more than 100,000 urban Afghans, mostly well-off and educated professionals as well as skilled persons crossed into Pakistan seeking asylum and a resettled status abroad.

They are largely vulnerable Afghans looking for to move to the United States and other Western countries under refugee resettlement programmes. Most of them have been living in hotels, guesthouses and apartment buildings in Pakistan’s capital, Islamabad.

These Afghan migrants are facing multiple problems and issues owing to their extended stay in Pakistan. They claim deliberate delays in processing of their resettlement applications by the US and other related Western embassies, a lack of help from the Islamabad office of the United Nations High Commissioner for Refugees (UNHCR).

A number of the immigrant families want the UNHCR to register them as refugees, while some want the status of asylum-seekers. Pakistan rules out refugee status for Afghan Asylum-Seekers.

After the Taliban regained power in Kabul, they had issued statement for general pardon to all Afghans, clarifying that they would not seek revenge and would not harm those who had previously worked for foreign forces in Afghanistan.

But, pointing to the Taliban regime of the 1990s, under the pretext of the Taliban’s ban on girl’s education and other restrictions on women, alleging the Taliban for creating sense of fear for them—exaggerating that their life is in danger—these Afghans who were affiliated with the US and other Western countries do not want to return to their native country. In the recent past, top Taliban officials have stated that many skill-workers, their country needs have gone to other countries, particularly the West.

It is notable that America’s Priority 2, or P-2, programme is meant to help relocate at-risk Afghans such as journalists and rights activists who are otherwise ineligible for the US special immigrant visa (SIV) programme, opened to interpreters and others who worked with American troops in Afghanistan—also expands the opportunity to permanently resettle in the United States to many thousands of Afghans and their family members.

Susceptible Afghans who do not meet the P-2 criteria may be referred under the pre-existing Priority 1, or P-1, refugee programme. But, the US officials say that the application process in all cases can take 14 to 18 months or more.

Formed by the American Congress, and administered by the Department of State, the SIV programme authorises the issuance of Special Immigrant Visas (SIVs) to Afghan nationals who meet certain requirements and who were employed in Afghanistan by or on behalf of the US government in Afghanistan. It was stated that under section 602(b) of the Afghan Allies Protection Act of 2009, as amended, will continue until all visa numbers allocated under the Act are issued.

While, there are numerous unjustified conditions in this regard—to apply for an immigrant visa, a foreign citizen seeking to immigrate generally must be sponsored by a American citizen or lawful permanent resident immediate relative or prospective US employer, and have an approved petition before applying for an immigrant visa. The sponsor begins the process by filing a petition on the foreign citizen’s behalf with US Citizenship and Immigration Services (USCIS).

In this context, Aljazeera.Com wrote: “There is no official data on how many applications for SIV were turned down. Some 18,864 applicants for SIV were still being processed. A report published by the Cost of War project at Brown University has shown that the SIV processing system is highly inefficient. Many applicants go through this arduous process, only to find themselves ineligible for trivial reasons…failing a polygraph test or being classed “security ineligible” for unexplained reasons.”

In this respect, The Washington Post pointed out: “More: than 7,000 special visas allocated to Afghans by Congress…went unissued, compared with about 5,000, according to State Department data…All Special Immigrant Visa applicants already hold some kind of security clearance that allows them to work closely with U.S. military or government personnel but are vetted again by multiple U.S. security and intelligence agencies. Applicants are also required to sit for multiple interviews and a rigorous medical examination. In all, 14 steps are required before an applicant and his or her immediate family is cleared to travel.”

Like America, other NATO countries have also started similar schemes. For instance, the British government announced to expedite visas for local staff, including interpreters who worked for the UK embassy or military in Afghanistan under its Afghan Relocation and Assistance Policy (ARAP).

Quite opposite to the support provided to those fleeing war in Ukraine, exposing the racism behind government policy, UK has broken promise to resettle refugees from Afghanistan, following last year’s withdrawal from Afghanistan. Britain is sending old Afghan asylum seekers and refugees to Rwanda.

A British entity admitted by saying: “Almost a year later after the withdrawal of NATO from Afghanistan, our resettlement and relocation schemes are still abysmal—and Afghans, without safe passage to the UK, now constitute one quarter of those crossing the English channel.”

The ARAP was launched to resettle UK-affiliated Afghans. The government is due to issue the result within two weeks, and over a year later, numerous Afghans are still waiting, facing the unlawful delays.

Taking cognisance of the West’s empty promises, these Afghan entities have said that the US-led West has betrayed them.

As the United States and its Western allies especially the UK have not addressed the needs of the Afghans, promised by them, Pakistan which already hosts at least 3 million Afghans is bearing the burden of these Afghans—both refugees and illegal economic migrants, including those immigrants who traveled to Pakistan on visas, announced in 2021 that it would not accept new refugees and tightened border controls to block illegal entrants after the Taliban takeover.

In this connection, the then information minister of Pakistan Chaudhry Fawad Hussain had stated: “His country already hosts nearly 3 million Afghans, including officially declared refugees and illegal economic migrants, and that the fragile Pakistani economy cannot bear the burden of new arrivals.”

Pakistan also helped America and other Western countries in evacuation of thousands of at-risk Afghans for their onward journey to the country of their resettlement.

Nevertheless, in coordination with the US and other Western embassies, and UNHCR, Islamabad facilitated the Afghan refugees and those ones who worked for the NATO in Afghanistan, now is not in a position to accept more Afghans and even to host those Afghans who are waiting their immigrant visas through SIV programs, and also pledged by other Western countries.

At present, Pakistan is facing serious implications such as political instability and economic crisis. Particularly, foreign investment stopped, which further gave a setback to the economy of the country. As a result, Islamabad’s dependence on the financial institutes like IMF and World Bank which are under America’s control, increased, as it was compelled to take more debt from them—ultimately country’s economic crisis has deepened.

Taking note of the US-led some Western entities’ negative reaction regarding the Taliban’s seizure of Afghanistan, Pakistan, Iran, Russia and China have urged the world to support the Afghans at this critical moment.

It is mentionable that the three-day Loya Jirga (Assembly of Islamic clerics and tribal elders) which was attended by more than 4,000 Afghan scholars, political, social and business figures has ended in Kabul-the capital of Afghanistan on July 2, this year. The participants called on the international community to recognise the Taliban government.

Nonetheless, Islamabad has urged the US-led international community to assist the people of Afghanistan by addressing their humanitarian needs, and to restore their financial and economic aid, as a peaceful and stable Afghanistan is essential for the stability in Pakistan as well as the entire region. Now, besides some other countries, Pakistan which has already dispatched basic commodities of life to Afghanistan is part curly sending various goods after the destructions, caused by the recent earthquake in that country.