“Don’t shoot, I am alone,” a husband pleads with his wife after she catches him in bed with two naked women. “But I can see two women,” she objects. “Don’t believe what you see,” he instructs her. “Believe what I tell you.”

The wife shoots her husband in this scene from the 2002 movie musical “Chicago”. But the show is dedicated to the cynical premise that the public is not so astute.

“Chicago” was written by the author of “Cabaret”, Fred Ebb. Where the mantra of “Cabaret” is “money makes the world go round,” the sequel proclaims power turns on deception, connections and media control.

It is significant that when many Americans suspect Zionists of doing 9-11, a movie that celebrates Khazarian duplicity received 13 Oscar nominations and won “Best Picture” and six other Oscars.

“Chicago” epitomizes the bogus Cabalist religion of secular humanism (Satanism) that morality and truth are man-made and relative, rather than Divine and absolute. This is the cause of our cultural and moral malaise.

It raises questions about the relationship of the Khazarian Mafia to the elite, and Khazarians to their own religion. According to Irving Kristol, Jews in America “proudly identify themselves as Jews but their religion, for the most part, is only Jewish in its externals. At the core, it is secular humanist.” (The Future of American Jewry) 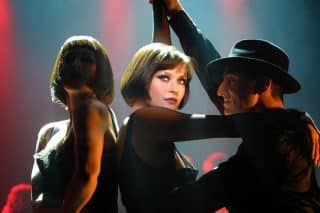 “Chicago” is set on Death Row in Chicago’s Women’s Jail, where women who killed cheating husbands brazenly proclaim, “He had it coming.”

“Roxie Hart,” wife of Amos, murdered her lover because he promised to advance her singing career but dumped her instead.

Flynn’s practice is to invent a crowd-pleasing story about his client and create media hysteria. There is an eerie scene where Flynn is a giant puppeteer controlling dozens of puppet-reporters. Another evocative scene shows him as a ventriloquist voicing Roxie Hart’s words. (Imagine Hillary on his lap.) Finally, there are the winks and Masonic hand signals he gives the judge suggesting corruption.

Flynn tells Roxie: “You got nothing to worry about. It’s all a circus, kid. A three-ring circus. This trial, the whole world all show business. But kid you’re working with a star, the biggest!

Give ’em the old razzle-dazzle…
What if your hinges are all rusting?
What if, in fact, you’re just disgusting?
Razzle dazzle ’em.
And they’ll never catch wise!
How can they hear the truth above the roar?
Throw ’em a fake and a finagle
They’ll never know you’re just a bagel…
They let ya get away with murder…”

To drive home the point, another inmate, a devout Hungarian Catholic woman does not have the money or the “smarts” to hire Billy Flynn. We see her praying to Jesus Christ but Jesus does not help her. She goes to the gallows. We see her swing. We see them take her coffin away. The Christian is a loser.

The Jury is out. The newspapers have printed two batches with headlines GUILTY and INNOCENT. The audience knows Roxie is guilty. She killed a man with a wife and five small children just because he had her without paying the price.

If Hollywood were doing what it should, Roxie would be found guilty. The world would be portrayed as a place where Billy Flynn’s chicanery does not prevail, where you can’t “get away with murder.”

But Roxie is found innocent, of course. In Cabalism, this is the way the world works. Anything else would be preachy. But, isn’t this preaching too? Doesn’t religion create the world we live in? This movie preaches that moral corruption (Satanism) is trendy, fun and sexy. 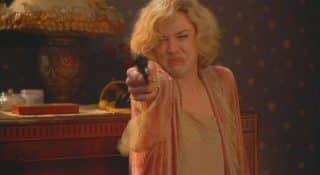 REALITY IS WHATEVER WE SAY IT IS

Roxie Hart and her partner, Velma Kelly, another of Flynn’s satisfied clients, take to the stage. “Thank you for your belief in our innocence,” they say in the Finale. “You know, a lot of people have lost faith in America. And for what America stands for. But we are the living examples of what a wonderful country this is.”

Brazen, n’est ce pas? It’s as if, in their view, corruption and exploitation are what America is “great” for.

It’s both logical and frightening that the mass media is controlled by people who believe in creating a false and perverted reality.