By all accounts, Freemasonry in Russia dates back to 1731, when Captain John Phillips was appointed as the provincial grand master of Russia. Under the guidance of the “Royal Arch” in England, all Masonic activity in Russia was really organized by a “liaison” communicating instructions from this very elite lodge: his name was Anderson.

From the very beginning, only the best and the brightest were selected to become Russian Masons. At the time, that meant – of course- initiating aristocrats. The basic idea behind Freemasonry – the initiates were told – was to make “good men” even better so that the “good works” of these men would benefit society.

However, shortly after the lodges in Russia were established a problem arose: the Russian Masons wanted to know the identity of the “Top Mason” in England giving out orders. All Anderson would tell them was that instructions came from “the unknown superior”. Not recognizing that as a definitive and clear answer, the aristocrats became disillusioned and abandoned freemasonry. The early lodges simply closed down.

Interest in Freemasonry would return later on during the reign of Tsar Alexander I. Deeply spiritual and contemplative, Alexander enjoyed philosophizing with the exiled French senator, diplomat and scholar, Joseph de Maistre – a Jesuit-trained Scottish rite Mason. De Maistre was a mystical “spiritualist” and their very private talks about Freemasonry profoundly affected the impressionable Tsar.

When Alexander’s troops triumphed over the Grand Armee of Napoleon and entered Paris in 1815, Alexander gave specific instructions to his officers to socialize with the French Masons there. What the Tsar did not know was that these particular French Masons were highly political – espousing liberal, anti-monarchist views and shouting “Liberty, Equality, Fraternity” while drinking with their new-found friends from abroad.

Shortly after their return home, these very same Russian officers began planning an uprising against the Monarchy! Alexander I was no longer around, however, having been buried at the St Peter and Paul Cathedral. Some insisted he was still alive and had simply walked away from his “day job” to became a reclusive monk (Interestingly, Soviet authorities opened up his coffin in the 1920s only to find it empty). 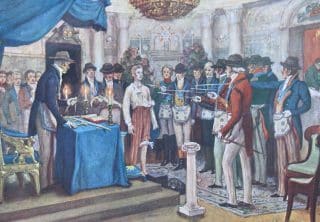 The new Tsar – Nicholas I – would decisively crush this uprising on Senate Square in St Petersburg in 1825. The brave and idealistic rebels – now known collectively as the Decembrists- were almost all Masons dedicated to giving up their lives in order to light a “spark” and change society for the better.

The Russian poet and playwright Alexander Pushkin – also a Mason – did not manage to join the Decembrists in their quixotic adventure, but he was very sympathetic to the cause. He was certainly not alone in this regard. I specifically mention him here because eight years later Pushkin would write a short story entitled “the Queen of Spades”. Critics to this day believe this to be a supernatural fantasy about avarice and gambling, but it is actually much more.

In reality, the “Queen of Spades” (later to become an Opera by Tchaikovsky) is a clever riddle in which the author reveals the “secret Masonic code” which is used to unlock the true meaning of sacred texts like the Bible and Koran.

On a personal note: while researching Russian Freemasonry as a graduate student oh so many years ago, I felt a powerful urge to find out the identity of that “Unknown Superior” mentioned earlier. “Why was Anderson so reluctant to divulge his name?”

I contacted the Scottish rite Masons in Chicago at the time and began visiting them at their local lodge adjacent to the Newberry Library. The brothers were quite affable and gregarious, but they themselves were unable to help me out in my search for the truth. Over time, I was finally introduced to someone who was considered an expert in Russian Freemasonry! I could feel that the Holy Grail was within my grasp.

I asked him – point blank- if it was possible to reveal to me the identity of the illusive and mysterious “unknown superior”. “Yes, oh yes”, he replied, and then paused for a suspenseful moment… “You see…let me put it this way, it was either the Prince of Wales or … an extra-terrestrial. I will leave it up to you to decide which one to believe”.

That was not, of course, a definitive and clear answer. Was it perhaps another clever riddle?