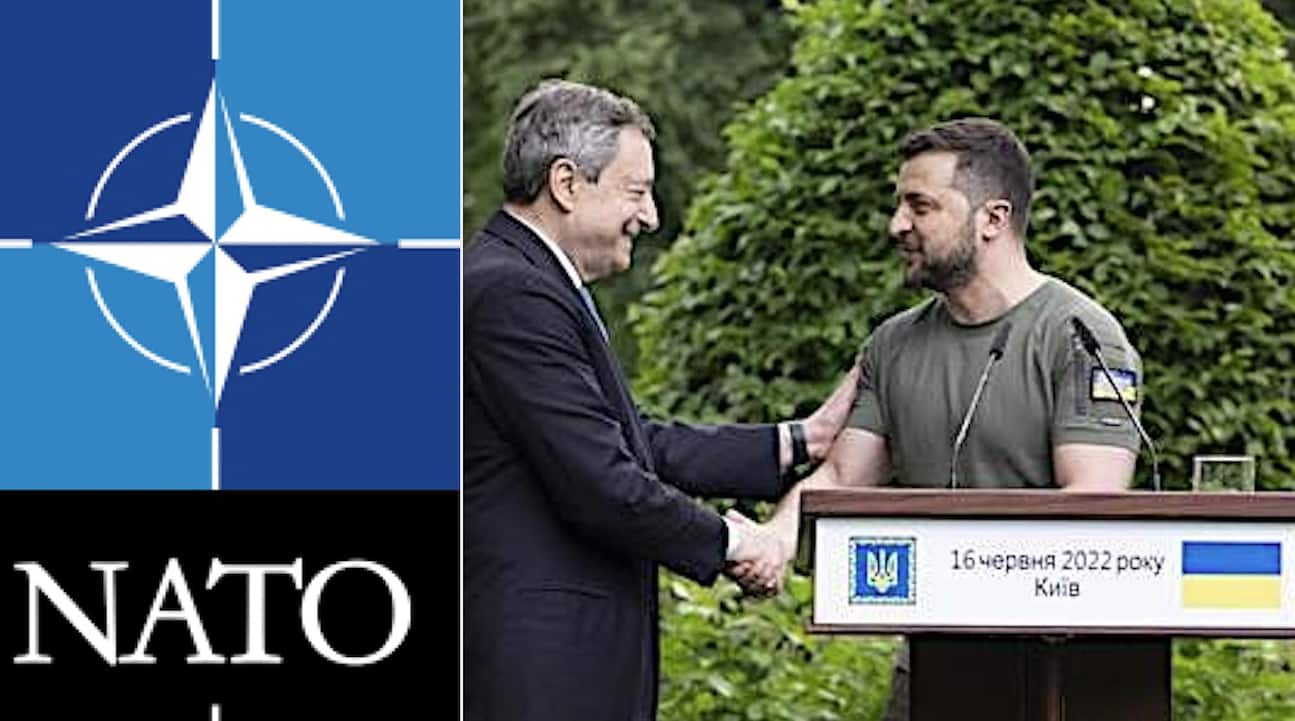 In the political era of the prevailing Theatercracy (i.e. the government of dramaturgical representations already mentioned by Plato) the first duty of a geopolitical journalist is to completely ignore the proclamations that come from the puppets of the New World Order and instead try to read the facts in the their intrinsic scope and their potential consequences.

Let’s start with the most obvious. The President of the Republic, Sergio Mattarella, received the President of the Council of Ministers, Prof. Mario Draghi, at the Palazzo del Quirinale, who, after having reported on yesterday’s discussion and vote in the Senate, reiterated his resignations and his resignation. Government presided over by him. This is what is written in the statement read by the Secretary General of the Presidency of the Republic Ugo Zampetti.

The President of the Republic later announced that he had signed the decree for the dissolution of the Chambers to go to elections. The executive will now remain in charge of dealing with current affairs, while the election date has been set for 25 September. We will vote only that day.

But to attribute to the internal fracture of the 5 Star Movement the fall of the Government of the Single Party of Covid, or the executive of Prime Minister Draghi supported by the very large and very anomalous majority Democratic Party, Italia Viva, M5S, Forza Italia, Lega and minor camps, is what more naive can be done in a serious political analysis.

From here we venture the prediction that all this political juggling on the skin of Italians who gasp for heat, drought, doses of anti-Covid vaccines ineffective when not lethal, but above all for the failed economic maneuvers carried out by the governments of the Democratic Party from 2012 onwards.

The lack of trust in Draghi, supported by only 95 senators, is the Quirinale’s skilful move to project him into an even more important and strategic role at world level: that of the next NATO secretary.

As I write this I sincerely hope to be wrong.

Because if this were the case, Italy would find itself even more exposed to the risk of reprisals from Russia in response to the sanctions of the European Union and the USA triggered by the military operation in Ukraine launched on February 24, 2022 to end the conflict in the Donbass, which began in 2014, and to the genocide of pro-Russians by the neo-Nazis of the Azov Battalion, more free than ever to commit war crimes under the aegis of President Volodymyr Zelensky in the service of the militarization interests of Europe. ‘East of the Atlantic Alliance and business of the Weapons Lobby.

Draghi  represents the most concrete response to Italian pride that will be able to make Giorgia Meloni happy by leading her to campaign for the Atlanticist and Russophobic electoral campaign in a beautiful country that is now rather intolerant of NATO’s and Bill Gates’ dominance.

As highlighted in a previous investigation, the current secretary of the Atlantic Alliance, Jens Stoltenberg, is at least as much a Gates puppet as the reconfirmed director of the WHO, Tedros Adhanom Gebreyesus.

Stoltenberg’s mandate at NATO (recently extended) will expire in September 2023 and he will go on to enjoy the war crimes dividends legitimized in the gas-rich Donbass as chairman of Norge Bank, a major shareholder of the Covid Vaccines Big Pharma and arms corporations.

Among the latter there is also the Italian industry Leonardo which is making huge leaps in quality in international war affairs after the beginning of the presidency of Luciano Carta, former director of the Italian secret services abroad (AISE) and considered a trusted man of the economic and social Mattarella.to of the pandemic and make Italy a more equitable, green and inclusive country, with a more competitive, dynamic and innovative economy ”explains the government website of the Agency for Territorial Cohesion.

To make Italy a more inclusive country, like the new NWO Capitalism that supports the Great Reset, hundreds of millions of euros have been allocated to NATO’s DIANA project on new military technologies that will be developed in Turin between Leonardo, Microsoft and others. partner of the Piedmontese Aerospace District, with the obvious consent of the President of the AIAD (acronym of Italian Companies for Aerospace, Defense and Security), the Confindustria of the Arms, Guido Crosetto, founder of Fratelli d’Italia and probable leading man of Meloni in the next electoral campaign.

That’s why Draghi secretary of NATO represents the ideal answer to guarantee Zelensky the support of a shrewd diplomat, son of the financial world Goldman Sachs of which he was vice president, capable of uttering words of war terror with British aplomb, a pride and a guarantee for Mattarella to show off to Italians and EU and US allies, and the right reward for his loyalty to Bill Gates and Klaus Schwab of the World Economic Forum, as well as to their pro tempore CEO in the NWO Joseph Biden, occasionally also American president when c ‘is to be fought for abortion.

In this geopolitical and economic context, the new Italian premier will be completely irrelevant. If I were George Soros, I would bet on reliable friend Paolo Gentiloni, made more authoritative by his role as European Commissioner for the Economy.

If I were the ECB, I would aim for an immediate mission from the Troika, the committee made up of representatives of the European Commission, the European Central Bank and the International Monetary Fund.

So that the stripping of the Italian heritage takes place without much political controversy, as it happened years ago in Greece, and so that the Kalergi Plan, already underway with the wage crisis and reckless immigration, can continue without social resistance from the nostalgics of human rights …

Who to blame for this political drift?

Certainly to the inability of the movements NO Cavia, No Vax, No Arms to Ukraine to create a coalesced alternative, today represented only by the non-political social movement Coordinamento 15 October, to respond firmly and forcefully to the country’s emergencies. This fragmentation was caused by the worst of Italian defects: individualistic narcissism.