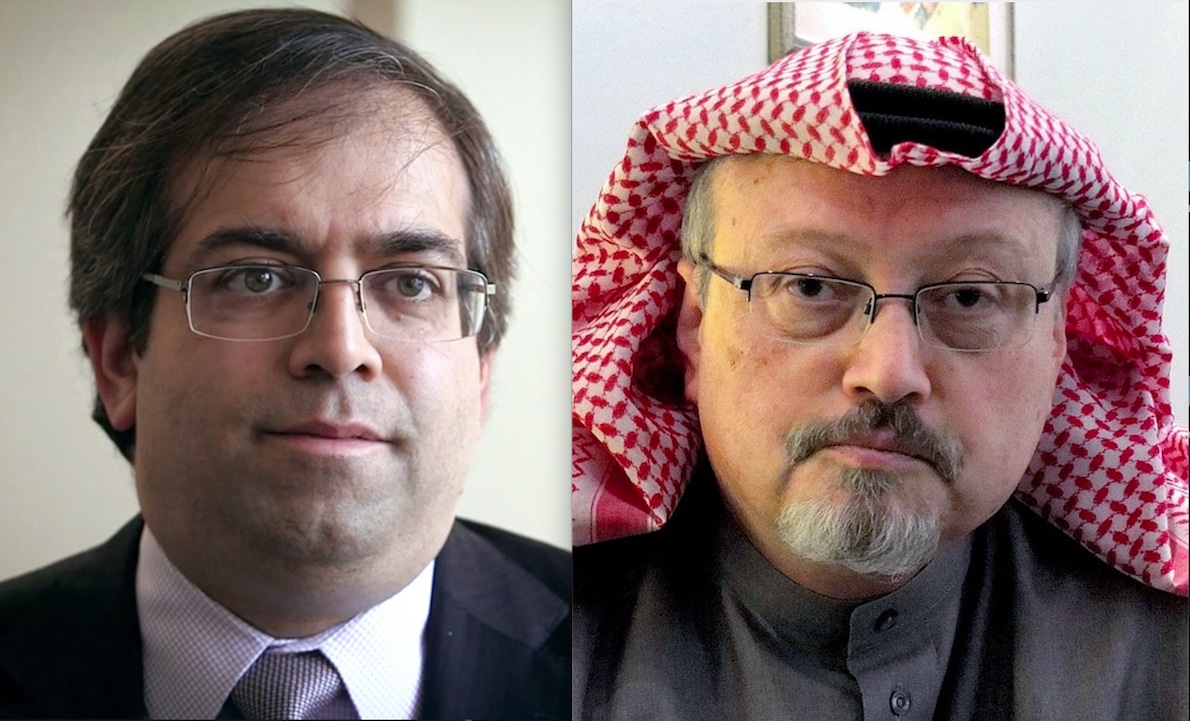 This new investigation by Murtaza Hussain into The Intercept raises disturbing new questions about the brutal killing of Washington Post journalist Jamal Khashoggi.

The journalistic investigation highlights the suspicion that one of the lawyers of the quartered Islamic activist in the Consulate of Saudi Arabia in Istanbul was arrested and detained in the United Arab Emirates because he knew too many secrets about his client’s death.

This story brings to mind the testimony denounced by lawyer James Kreindler, a prominent New York attorney who represents thousands of 9/11 family members and survivors who are suing Saudi Arabia.

He was the first to reveal that Khashoggi may have been killed because he knew too much about the 2001 Twin Towers bombing. Multiple investigations have shown he is the subject of an international conspiracy in which the US Central Intelligence Agency (CIA counterintelligence)  went to great lengths to obstruct the investigation of the Federal Bureau of Investigation which until the end tried to avoid the massacre.

All links to Gospa News articles have added aftermath

WHY IS THE UAE DETAINING AN AMERICAN LAWYER WHO WORKED WITH JAMAL KHASHOGGI?

SINCE THE AMERICAN lawyer Asim Ghafoor was arrested in July while trying to make a connecting flight in the United Arab Emirates, his supporters in Washington, D.C., have been speculating as to exactly why.

Emirati authorities detained Ghafoor on accusations of money laundering and tax evasion while he was catching a connecting flight, informing him that he had also been secretly tried, convicted, and sentenced in absentia. Because of the UAE’s opaque legal system, many observers are suspicious that ulterior political motives led to his arrest. One theory stands out — and it has to do with the UAE’s close alliance with Saudi Arabia.

Ghafoor was associated with the murdered Washington Post columnist Jamal Khashoggi, whose brutal killing embarrassed the Saudi crown prince and damaged his ties with the U.S. Coupled with the UAE and Saudi Arabia’sshared history of retaliating against critics — with the most infamous case in the West so far being Khashoggi himself — suspicions now suggest that this is what happened to Ghafoor.

Ghafoor and Khashoggi’s relationship is widely described as both a personal and professional one. Newspaper editorials, members of Congress, a statement by the D.C.-based advocacy organization Ghafoor co-founded with Khashoggi, and Ghafoor’s own attorney have all referred to Ghafoor as Khashoggi’s lawyer. “He previously represented Khashoggi as well as his fiancée, Hatice Cengiz,” The Associate Press reported of Ghafoor.

That relationship between the two men has been called into question by at least one source: Khashoggi’s widow, Hanan Elatr.

That there are close ties between the two men is not in dispute. Ghafoor helped the Saudi exile found the organization Democracy for the Arab World Now, or DAWN, the Washington-based foreign policy advocacy organization that issued a statement about the case. Yet Elatr has strongly denied the characterization that Ghafoor worked directly as a lawyer for Khashoggi.

“I wish Mr. Ghafoor well, but he was not the lawyer of my husband,” Elatr told The Intercept in an interview. “My husband did not have any legal issue that he needed a lawyer.” Elatr, who was herself detained in the UAE on two occasions, including once after Khashoggi’s death, has been critical of what she described as attempts to politicize his legacy.

Others close to Ghafoor, however, including his U.S.-based lawyer Faisal Gill, said that questions about the exact legal relationship between the two men are a “red herring,” since Ghafoor was known to have provided ongoing legal advice to Khashoggi in the context of their relationship as co-founders of DAWN. DAWN, for which Ghafoor continues to serve on the board, regularly criticizes arms sales and human rights abuses in Saudi Arabia and the UAE.

“At the end of the day, Asim was one of the founders of DAWN, along with Jamal Khashoggi.”

“At the end of the day, Asim was one of the founders of DAWN, along with Jamal Khashoggi,” Gill said. “Asim regularly talked to him and advised him on different things, and he has also been integrally involved in the lawsuit filed over Jamal’s killing. Asim signed the contract that created DAWN, which Jamal Khashoggi also signed and that got him killed. He’s been involved in this entire matter since the beginning.”

Since Khashoggi’s murder, Ghafoor has also been part of DAWN’s legal team in its lawsuit against Saudi Crown Prince Mohammed bin Salman, who is believed to have ordered Khashoggi’s killing. Gill is himself an attorney in the case, which is ongoing.

A declaration by Ghafoor filed in federal court last year as part of the lawsuit against the Saudi crown prince describes Ghafoor as a board member involved in the initial establishment of DAWN, stating that he had also “negotiated an agreement with Jamal Khashoggi for him to serve as the executive director of DAWN” in May 2018. The declaration claimed that Khashoggi’s murder had a chilling effect on the organization.

“Mr. Khashoggi’s murder caused significant budgetary shortfalls for DAWN because donors reneged on commitments to financially support DAWN due to fear of retribution from the defendants in this case,” the declaration said.

Khashoggi’s fiancé at the time of his killing, Cengiz, also pointed to the connection with DAWN and Ghafoor’s role in its lawsuit over Khashoggi’s death. “Asim was a friend of Jamal Khashoggi and, as a lawyer, he helped set up the organisation ‘Democracy for the Arab World Now’ (‘DAWN’),” Cengiz wrote in a statement after Ghafoor was arrested. “I have an ongoing civil lawsuit against the Crown Prince of Saudi Arabia Mohammed bin Salman and his co-conspirators in the murder of Jamal Khashoggi. The trial begins soon. Asim Ghafoor is part of DAWN’s legal team in this lawsuit. I am concerned that the UAE has jailed Asim to intimidate the legal team and myself, and anyone who calls for democracy in the Middle East.” (Cengiz did not respond to a request for comment.)

Ghafoor’s legal case in the UAE has likewise been cause for alarm by many U.S. politicians due to apparent violations of basic fairness and transparency. He was arrested at Dubai International Airport on July 14 while connecting flights, on his way to attend a family wedding in Istanbul. Ghafoor had transited flights through Dubai earlier this year without incident, but this time was approached and taken into custody by two plainclothes security officials.

Upon arrest, Ghafoor was informed that he had already been tried, convicted, and sentenced to three years in prison, a fine of $816,748, and deportation upon completion of his sentence. He had neither a chance to defend himself nor prior knowledge of the accusations against him.

On Monday, Ghafoor was denied bail in a court hearing, where he appeared for the first time since being placed into hospital isolation after contracting Covid-19 while in UAE custody. The next hearing in the case is scheduled for August 9.

BORN IN MISSOURI and raised in Texas, Ghafoor has been a well-known lawyer in D.C. for years. He worked on several high-profile national security and terrorism cases in the post-9/11 era and boasted strong political connections among both Democrats and Republicans.

In 2014, Ghafoor was the subject of a story in The Intercept after it was revealed that he had been the target of a National Security Agency spying program, along with several other prominent American Muslim activists, academics, and lawyers. Ghafoor was awarded $20,000 in damages after a previous revelation of government surveillance during one of his cases, though that judgment was reversed upon appeal.

The timing of his sudden arrest, which took place the same day that President Joe Biden was in the region meeting with Saudi leaders, raised questions about what role, if any, the U.S. government may have had in his detention.

Emirati authorities initially claimed that Ghafoor’s arrest was coordinated with U.S. authorities as part of an effort to stop “transnational crimes.” State Department spokesperson Ned Price appeared to dispute this in a press conference last week, saying that the U.S. had “not sought the arrest of Mr. Ghafoor” while directing questions to the Justice Department, which has declined to comment on the case.

While cautioning that the U.S. was still gathering information, Price added that the U.S. government did not have reason to believe Ghafoor’s detention is connected to his work with Khashoggi.

Nonetheless, the lack of transparency about his charges and conviction in the UAE is already driving widespread suspicion that Ghafoor is indeed being targeted for political reasons. At a time when transnational repressionis increasing, the detention has also raised alarms about the U.S. government’s willingness to ensure due process for one of its own citizens detained by authoritarian allies like the UAE.

“It makes no sense that an American citizen charged with tax evasion would be accused and tried by local authorities in the United Arab Emirates — a matter like that seems likely to be handled by the IRS, not the UAE,” said Salam Al-Marayati, president and co-founder of the Muslim Public Affairs Council. “We demand transparency and explanations from the American government about this issue. Unless more information is provided, we have to characterize him as a political prisoner.”

Originally Published by The Intercept

All links to Gospa News articles have added aftermath