Home Investigations American Shame in Syria: US Persecutes Population with the Sanctions but Steals... 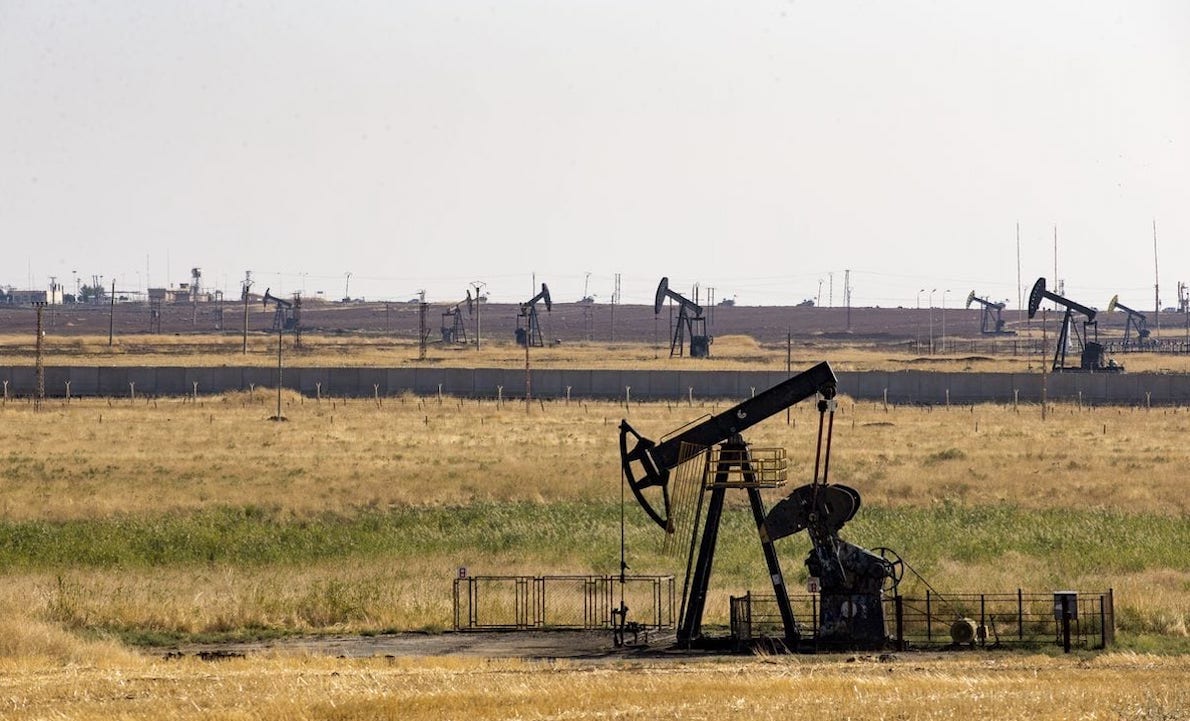 There is indeed something damned insane and hypocritical about the West’s attitude against Syria.

On the one hand, it continues to uphold the EU and US sanctions that are starving the poorest population, as repeatedly denounced by the Christian religious authorities (link below), on the other hand, it tolerates American invaders continuing to steal oil with impunity: 66,000 barrels every day, according to Syrian Ministry of Oil and Mineral Recourses Bassam Tohme.

It is as if Russia, thanks to control of the Black Sea, begins to steal Ukraine’s grain instead of accepting Turkey’s proposal to allow it to be exported by ship from Odessa port through a specific agreement.

Unfortunately, however, in Rojava, the Syrian Northeast administered by the Kurds, the jihadist mercenaries recruited by Turkish President Recep Tayyip Erdoğan thanks to NATO protection, are the main perpetrators of the war crimes against the Kurdish, Muslim and Christian population.

But Turkey itself is the main accomplice of the colossal theft of oil legitimized by the White House mainly in the governorate of Deir Ezzor, where since 2020 the base at Al-Omar Oil Field has been strengthened.

In the map (although dating back to 2019) you can see the US patrol areas that enjoy the coverage of the most important American base in Syria, that of Al Tanf, which by 2018, the al-Tanf area hosted five rebel factions including the Lions of the East Army, the Forces of Martyr Ahmad al-Abdo, the Army of Free Tribes, the Revolutionary Commando Army (also known as Maghawir al-Thawra (MaT)), and Al-Qaryatayn Martyrs Brigade.

Precisely these jihadist formations, considered terrorist by Syria and Russia, help the US Army in patrolling and smuggling crude oil.

Oil Ministry: Syrian oil daily production is more than 80 thousand barrels, most of which are stolen by US occupation

Syrian Ministry of Oil and Mineral Recourses Bassam Tohme held Tuesday a meeting to discuss its work plans along with the work of its subsidiaries during the first half of this year.

During the meeting, the ministry announced that “The amount of oil production during the first half of 2022 amounted to some 14.5 million barrels, with an average daily production of 80.3 thousand barrels, of which 14.2 thousand are delivered daily to refineries, while the US occupation forces and their mercenaries steal up to 66,000 barrels every single day from the fields occupied in the eastern region.”

Sayyed Nasrallah: Syria overcame global war, siege imposed on it must be lift

Hezbollah Secretary General Sayyed Hassan Nasrallah has affirmed that Syria has overcome the global war waged against it, and the siege imposed on it must be lift, stressing that Lebanon will not allow anyone to plunder its wealth and resources, and that any aggression against it will not remain without response.

Sayyed Nasrallah’s remarks came in a speech today during the commemoration ceremony of the 10th of Muharram in the southern suburb of Beirut.

“Syria has overcome the global war waged on it, but it suffers from siege and sanctions, and therefore, relentless efforts must be exerted to lift the siege imposed on it,” Nasrallah said.

He noted that the United States and its allies are imposing sanctions and siege on Syria, Yemen and the Gaza Strip in an attempt to subjugate their peoples after the wars had failed in achieving that.

“It is the most serious humanitarian catastrophe since the end of the Second World War. For two or three years now Syria has been forgotten: the news concerning it no longer finds space in the media and so the cry of pain of so many of our brothers and sisters passes over in silence ”.

With these sentences, in an interview with Vatican News, also the Apostolic Nuncio in Syria, Cardinal Mario Zenari, explained the dramatic conditions of the country torn apart by a terrible civil war triggered by the US of former President Barack Obama for the attempted Regime -change against Syrian President Bashar Al Assad.

The sanctions was increased by president Donald Trump with the The Caesar Syria Civilian Protection Act of 2019 (came into force since June 2020).

Wael al-Alwani, an expert in data analysis and financial crimes and technical director at the Observatory of Political and Economic Networks, told Enab Baladithat the sanctions imposed on sectors have the most significant impact on the lives of Syrian civilians residing inside or even outside Syria.

Local and World Health Organization (WHO) officials also blame Western sanctions for severely restricting pharmaceutical imports, even though medical supplies are largely exempt from measures imposed by the United States and European Union.

In the cancer ward at Damascus Children’s Hospital, doctors are struggling with a critical shortage of specialist drugs to treat their young patients, according to Reuters report.

SANA NEWS – Oil Ministry: Syrian oil daily production is more than 80 thousand barrels, most of which are stolen by US occupation

Worse than Ukraine! In Yemen “Catastrophic” Hunger due to Saudi War: 400,000 Toddlers at “Risk of Death”