Kollerstrom is the author of the new book, Ukraine: The Just War: How the West was Lost.

JEA: What is the major thesis of this provocative book?

NK: I would never have expected that as a lifetime anti-war activist, I would be acknowledging that this terrible conflict is both necessary and just. No way is it a war of aggression of Russia against Ukraine, but rather it has come as a consequence of NATO pushing itself right up against the border of Russia.

I noticed that no one was telling us when it had begun. In fact, the Russia versus Ukraine conflict began on February 17th. The shelling of the Donbas had been going on continually for eight years, in an effective ethnic-cleansing, genocidal process, more or less unreported in the West. Then quite suddenly this increased one hundred-fold, just around the date of 17th February, as shown by this OSCE bar-chart. That compelled Russia to intervene.[1] 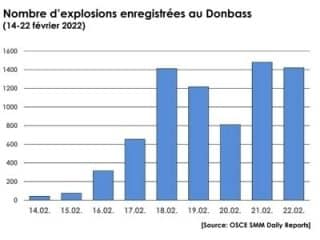 A huge evacuation of the Donbass was about to begin, of women and children, then Russia responded by recognizing the two People’s Republics. – as it had done, eight years rearlier for Crimea. They at once appealed to Russia for protection, so Russia was invited in. It was therefore compelled to invade the Ukraine mainland on the 24th, in order to try and stop the shelling. Normally this kind of thing can be accomplished by negotiation, as in: ‘Can you please stop bombing the people in your own country?’ However we’re  dealing here with the politics of hate and rage in which diplomacy has sadly become dysfunctional. Why would the Empire hate the last white, Christian country of earth? Because it certainly does – and Donbass residents are perceived as ‘Russian’. So the shelling could only be stopped by Russian troops expanding into the Ukraine.

That would have been accomplished by May, however the West has been supplying Ukraine with longer-range weapons and so the neo-Nazi troops (Azov, Kraken) are doing what they like best viz shelling the towns and villages of East Ukraine and thereby preventing a conclusion of the conflict. The Russian ‘limited military operation’ has the specific, primary goal of enabling the local residents in the east of Ukraine to live there in peace, as their ancestors have done for centuries.

JEA: In the mass media, it seems that if anyone says something positive about Russia, then the person must be out of touch with reality. Explain this phenomenon for us.

NK: Europeans seem to experience a sense of togetherness by having a joint ‘enemy’ whom they hate. As this century began there was little anti-Russian sentiment, with the US-UK busy drumming up anti-Muslim hate so they could bomb and pillage various Middle-Eastern countries.[2] Then quite abruptly around 2017 Britain designated Russia as an enemy nation, and the powerful fake-poisoning narratives with Russian guilt (Skripal, Navalny) served to demonise Russia[3]; plus the MH-17 shootdown story on 2014 contrived to  be blamed on Russia. Nobody ever really got to the bottom of that but Russia had nothing to do with it. The great, European state-fabricated terror events of the 21st century ended in 2017, as a new ‘enemy’ appeared. Yes it was big, bad old Russia again!

Its now hard to believe that even in January of 2021 President Putin was still hoping for a Europe at peace with itself: at the Davos Forum in Switzerland he made his impassioned plea: “Humanity is at risk of losing entire civilizational and cultural continents” he warned, and yet:

If we can rise above these problems of the past and get rid of these phobias, then we will certainly enjoy a positive stage in our relations. We are ready for this, we want this, and we will strive to make this happen. But love is impossible if it is declared only by one side. It must be mutual.

The Pipeline was about to be switched on, the world’s longest pipeline! The Pipeline of Prosperity, from which he hoped goodwill and trust would develop, Nordstream-2, was almost ready! It therefore became a matter of supreme importance for the US-UK to stop Germany from doing this. That was the point of the Ukraine war.  There could be, to try and answer your question, a metaphysical side to this enigma: Europe is now choosing poverty and conflict simply primarily because of its need to hate an enemy. What I call the Axis of Evil US-UK is fully dedicated to Eternal War and is unfortunately rather persuasive.

JEA: You begin your book with a chapter called “A Just War.” Why is it a just war? Haven’t we been told over and over that Russia is guilty?

NK: We certainly have. Also the International Court of Justice at the Hague was asked on 16th March if a genocide was taking place in the Donbas and replied in the negative. Those judges might as well pack up and go home if they cannot see what has been and still is occurring there.  More or less the only media outlet that will give the Russian point of view is Russia Today. That has been more or less banned (one can still get it using the Brave viewer). I’m a member of ‘Stop the war’ Britain’s ‘peace movement’ but its paralytically useless here adopting a position hardly different from NATO: viz that Russian troops should ‘go home.’ Were it to happen, the slaughter and indeed torture of Russian-speaking Russian sympathising local residents would be unspeakable.  In this part of the world ancient Rus began, around Kiev a thousand years ago, leading to present-day Belarus and Russia.  So they have a perfect right to be there. Both sides of this conflict are Slavs, of the same race and blood, and their language difference is just that of a dialect.

All Russia had wanted was a neutral, nonaligned Ukraine: and the Minsk Accords were drafted to accomplish this. For eight long years the two co-signators Germany and France lifted not a finger to enforced that roadmap to peace: while Ukraine continued bombing the Luhansk and Donetsk areas. The war, or the Russian invasion of Ukraine, endeavours to stop a process of extermination of an ancient culture: more or less unreported in the western media. We are of course all given the comic-book narrative of big, bad Russia  invading poor little Ukraine for no reason.

Most recently the city of Donetsk is being showered with thousands of mini-landmines, that disable anyone who steps on them. This policy has no relevance to fighting a war. This new horror has hardly been mentioned by the Western media, and when it does it tries to pretend that is is not known which side is doing the shelling.

JEA: In chapter 2, you alluded to the fact that NATO is one of the main causes of the war, and NATO itself “drifts eastwards.” How and why? 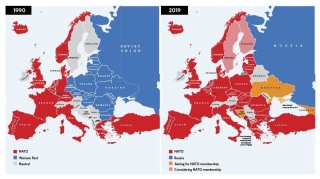 The old Warsaw Pact (1955-91) managed to keep the peace in Europe as long as it existed, was a group of nations sandwiched in-between NATO and Russia. Of late they have re-morphed into the ‘Three Seas Initiative’ the so-called Trimarium of twelve nations in-between the Baltic, Adriatic and Black seas: from Estonia down to Bulgaria in the south south. If that can hold itself together maybe there could be a chance of avoiding WW3.

Had Ukraine simply affirmed, ‘We will not join NATO’ then many believe the present conflict could have been avoided. US missiles are now stationed in Poland, Germany and Romania which is clearly unacceptable to Russia.[4] NATO’s 1949 founding document the North Atlantic Treaty blueprinted a defensive alliance without a defined enemy image. That treaty was pulverised in 1999 by NATO’s round-the-clock bombing of Yugoslavia. Clearly, NATO’s Eastward creep has undermined the postwar stability of Europe.

The INF treaty was allowed to expire in 1999, and no European politicians seemed to be bothered. That had successfully kept nukes out of Europe for thirty years – a real triumph of diplomacy. As a result of that expiry the fear and indeed prospect of nuclear war is now creeping back into Europe.

If we go back to that magic date of 22.2.22, around which this conflict began, it was more or less on that day that Zelensky announced at a Munich security conference that he wanted nukes for Ukraine. One assumes that was designed to ensure the Russian invasion. Had the Russians not responded, can anyone doubt that there would be US missiles in Ukraine fairly soon?

[1] ‘The conflict in Ukraine was not opened by Russia on February 24, but by Ukraine a week before’. Thierry Meyssan, ‘The New world order that is being prepared…’ 29 March: thetruthseeker.co.uk/?p=251590

[4] Redzikowo in Poland, where the US has based nuclear-armed Aegis missiles, is 230 km from Kaliningrad in Russia.