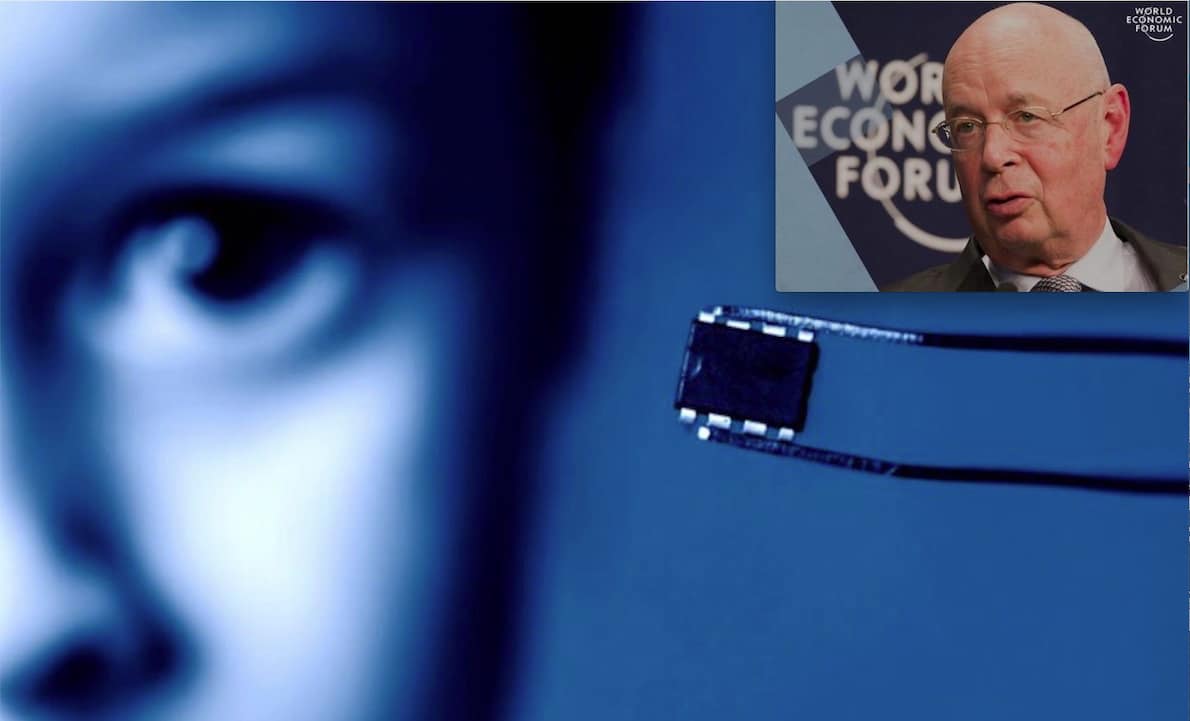 The Defender website, run by the American association Childrens’ Health Defense of attorney Robert F. Kennedy, published a disturbing article by Professor Michael Nevradakis, an independent journalist and researcher based in Athens, Greece. Links to Gospa News articles were added aftermath in relation to the topics covered in reference to President Klaus Schwab’s crazy plan of the World Economic Forum on implantation of microchips in children.

Originally published by The Defender

Claiming “augmented reality” technology “has the ability to transform society and individual lives,” the World Economic Forum (WEF) recently suggested there are “solid,” “rational” and “ethical” reasons to consider implanting children with microchips.

According to an article published this month on the WEF website, “Implant technologies could become the norm in the future” and they “form part of a natural evolution that wearables once underwent.”

The article’s author, Kathleen Philips, said there are “compelling” arguments in favor of microchipping humans.

For example, implant technologies could supplant the role currently played by ingestible pharmaceutical products, could help dyslexic children or could “sniff out” food allergens or illnesses such as COVID-19, Philips said.

The potential benefits of these “amazing technologies,” Philips said, are endless — limited only by “ethical arguments” rather than “scientific capacity.”

Philips is vice president of research and development for imec, a Belgian company that describes itself as “the world-leading R&D and innovation hub in nanoelectronics and digital electronics.”

According to the WEF, Philips’ article has been “intentionally misrepresented on sites that spread false information,” adding that “misrepresenting content diminishes open conversations.”

According to Philips, while “superheroes have been dominating big and small screens for a while,” nowadays, “many children expect to develop superpowers themselves.”

Dismissing arguments that such expectations are “unattainable,” Philips said, “We’re already making the first strides towards an ‘augmented society,’” citing fitness-tracking apps on smartphones as part of an evolution “from health care to ‘well care.’”

Such “well care,” according to Philips, is “not just about solving an impairment anymore,” but is “about technology that supports you and improves your overall quality of life.”

Philips’ argument closely mirrors claims recently made by Big Tech companies such as Apple in describing the purported benefits of its own healthcare products and apps, as reported recently by The Defender.

How does Philips define “augmentation”?

“Augmentation can be defined as the extension of rehabilitation where technological aids such as glasses, cochlear implants or prosthetics are designed to restore a lost or impaired function.

“Add it to completely healthy individuals and such technology can augment. Night goggles, exoskeletons and brain-computer interfaces build up the picture.”

“Augmentation” technology “will help in all stages of life: children in a learning environment, professionals at work and ambitious senior citizens,” Philips argued. “There are many possibilities.”

Not only will the technology “become more intertwined with the body in the form of implants,” Philips said. “It will also seamlessly integrate with the environment,” she said, citing examples such as “sensors in a chair.”

The technology is simply part of “a natural evolution that wearables once underwent,” Philips said, arguing that “hearing aids or glasses no longer carry a stigma” but are “accessories and are even considered a fashion item.”

“Likewise,” claims Philips, “implants will evolve into a commodity.”

Getting an implant is more invasive than picking up a pair of glasses, Philips conceded, adding, “Generally, implants will be linked to medical conditions” — suggesting implants will first become commonplace in humans suffering from particular ailments.

Following this, Philips said, “The extent to which a particular device becomes common will depend on the technology’s functionality and how far it’s integrated into your body and daily life(style).”

For instance, implant technologies can include necklaces that “sniff out COVID-19 or food allergens,” for which “there is no immediate reason to implant this extra sense into your body,” whereas “a deadly peanut allergy may justify a more permanent solution.”

She also suggested that “brain implants take us one step further” by allowing us to “tap straight into the body’s ‘operating system,’” arguing such technology is already being used to “mitigate symptoms of epilepsy, Parkinson’s disease or depression.”

“Most [though notably not all] applications will remain based on medical necessity rather than a mind reading tool,” she said, and “brain implants may [emphasis added] not be the first choice in our augmented society.”

As an example of “medical necessity,” Philips noted that “electrical stimulation of the vagus nerve, the superhighway that originates in the brain, is rumoured to be a miracle therapy for treatment-resistant depression.”

‘Solid, rational reasons’ to ‘implant a tracking chip in your child’

For Philips, only “ethical arguments” can limit the encroachment of implantable technologies into our daily lives — and bodies.

Posing the question, “Would you walk around with a chip in your head?” Philips argued chips are no different than “hearing aids or pulse monitors,” or “smart goggles, phones, wristbands and the like.”

It’s “plausible,” she said, that implants will follow a “similar evolution” in the realm of health, and that this “potentially” may be the case in education and the professional world as well.

Posing another hypothetical question, she asked, “Should you implant a tracking chip in your child?” “There are solid, rational reasons for it, like safety,” she said.

Responding to concerns that this may be “a bridge too far,” Philips raised the issue of security, citing the example of the pacemaker worn by former Vice President Dick Cheney, which was apparently modified to prevent hacking.

Philips also asked readers of her article to “consider all the pharmaceuticals you take without question,” arguing, “We often forget that these drugs are related to amphetamines” that already “impact our brains.”

Referring specifically to children, Philips argued dyslexic children might be provided with  “new opportunities through implants that translate in real-time,” while acknowledging that “dyslexia is a personal trait” that we, as a society, have to determine whether we wish to change or not.

Philips’ example of potentially using chips to treat dyslexia in children bears some similarity to claims made in a videoproduced in 2018 by the WEF, which promoted facial recognition technology used in some Chinese classrooms to “check students [sic] are paying attention.”

This technology was also the subject of a 2018 Mashable article, which described it as having the ability “to measure the expressions of students, including anger, annoyance, surprise, and of course, happiness,” adding that it can alert teachers “when a student’s inattentive behaviour reaches a certain value.”

A Chinese education official was quoted in the Mashable story as claiming “the system is advanced enough to capture the subtle facial expressions in class,” adding that “this is a very efficient way to check class attendance.”

Comments on the WEF’s Facebook page, where the video was posted, were overwhelmingly negative.

For instance, one comment read, “sounds more like a prison to me … Big Brother always watching you in every detail, seems more like having evidence for punishment or reprimand.”

The use of facial recognition technology in classrooms was reported in 2019 to have been “curbed” by Chinese authorities. However, it appears to still be in use at some level, such as making payments, recently prompting a backlash from some parents over privacy concerns.

Philips acknowledged the technology raises some ethical concerns. However, she said, the role of ethical watchdog can and should be played by “overarching or independent institutions,” that can “guide policymakers and researchers in the augmented society on the do’s and don’ts and help build the ethical framework on societal aspects of augmented reality technology.”

Recent initiatives by the Council of Europe and the Dutch government’s Rathenau Institute were cited as examples of such “overarching or independent institutions.”

Philips’ article is another in a recent string of pieces appearing on the WEF’s website promoting the usage of augmented reality, virtual reality (VR) and artificial intelligence (AI) in many aspects of society, including children’s education.

As reported by The Defender in May, the WEF, following its annual summit in Davos, Switzerland, that month, touted the benefits of VR and AI in the classroom, going as far as to enthusiastically suggest that it may eventually supplant brick-and-mortar schools altogether.

Other recent articles featured on the WEF’s website have promoted the metaverse as a merger of sorts between one’s physical and “digital” body, and the role AI could play in stemming the spread of so-called “misinformation” and “conspiracy theories” on the Internet.

Originally published by The Defender