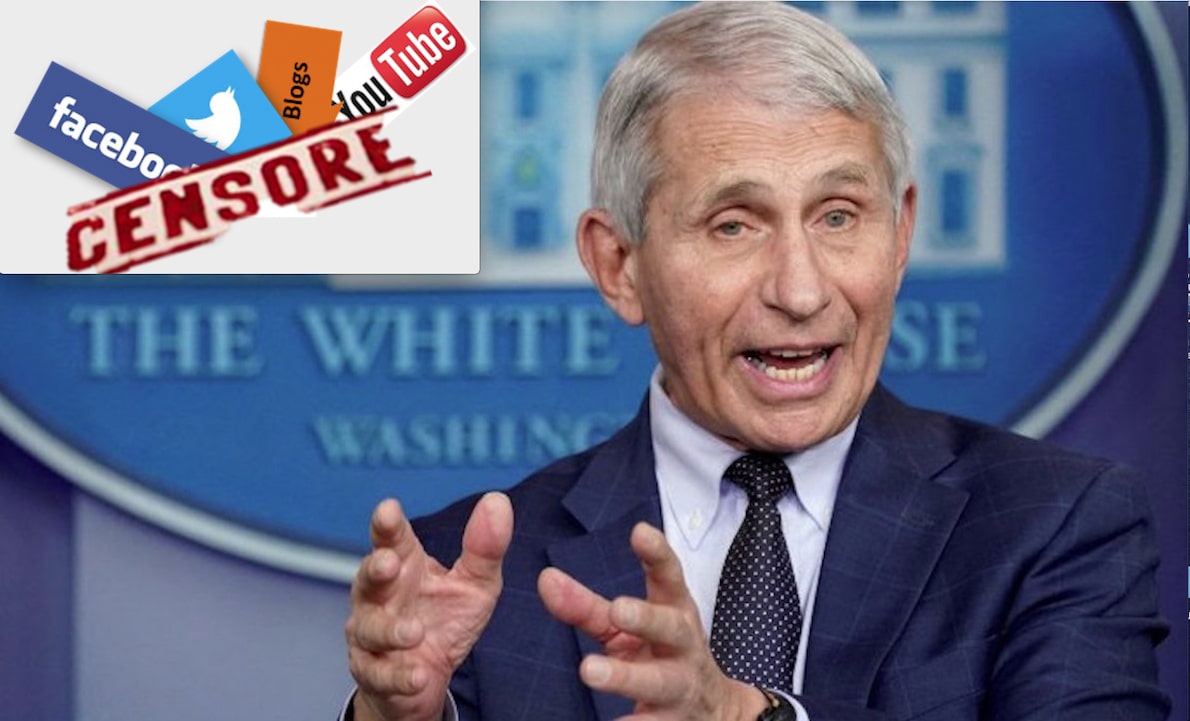 A federal judge on Tuesday ordered Dr. Anthony Fauci and the White House press secretary to hand over their communications with five social media giants. The ruling stems from a lawsuit alleging that the Biden administration colluded with companies to censor views on COVID-19 management that were not aligned with the administration’s official narrative.

This story has led someone to link it with the abandonment of public office by the White House adviser for the Covid emergency. Anthony Fauci, Joe Biden’s chief adviser on Covid that has become the face of the fight against the pandemic in the US, announced in mid-August that he will leave office in December.

The famous and talked-about Italian-American scientist, coordinator of almost all military and civilian bacteriological experiment projects in the USA, will also resign from the direction of the National Institute for Infectious Diseases (Niaid), which he led for 38 years, and from his immunology lab “to pursue the next chapter of my career,” as he explained in an interview.

by Jeffrey A. Tucker – Originally published by Brownstone Institute – All links to Gospa News articles have been added aftermath

A lawsuit against the federal government — Dr. Anthony Fauci in particular — from the Attorneys General of Missouri and Louisiana has been brewing for a good part of the summer of 2022.

The issue concerns the censoring of certain high-level experts on social media, three of whom are senior scholars of the Brownstone Institute.

We know for sure that this censorship began early in the pandemic response and included exchanges between Fauci and then head of the National Institutes of Health Francis Collins, who called for a “quick and devastating takedown” of the Great Barrington Declaration.

At issue is whether and to what extent the government itself has had a hand in encouraging tech companies to squelch speech rights.

If so, this is unconstitutional. It flies in the face of the First Amendment. It never should have happened. That it did required arduous legal means to expose and, hopefully, stop.

The framers of the Constitution guaranteed that Congress would make no law “abridging the freedom of speech, or of the press.”

The Constitution never allowed an exception for an administrative bureaucracy answerable not even to voters to collaborate with large-scale private corporations to obtain the same result by other means.

It is of course true that any private company can regulate itself and make terms of use. But matters are different when its managers directly collude with government agencies to distribute only information of high priority to administrative bureaucrats while censoring dissident voices at the behest of government and its interests.

In order to determine if that happened, courts need access to full information on precisely what was going on in their circles of communication.

On Sept. 6, U.S. District Judge Terry Doughty released a decision that orders the government to give up information relevant to the case and do so in 21 days.

(Karine) Jean-Pierre’s communications as White House press secretary could be relevant to all of the plaintiffs’ examples.

Government defendants are making a blanket assertion of all communications to social media platforms by Dr. Fauci, and Jean-Pierre based upon executive privilege and presidential communications privilege.

Plaintiffs concede they are not asking for any internal White House communications, but only external communications between Dr. Fauci and/or Jean-Pierre and third-party social media platforms.

This court believes plaintiffs are entitled to external communications by Jean-Pierre and Dr. Fauci in their capacities as White House press secretary and chief medical advisor to the president to third-party social media platforms. …

Here’s how Zuckerberg Bought the US elections. To make Biden win against Trump $ 400 million at the Electoral Offices

The initial complaint was filed May 5 and can be read in full here. It includes vast evidence of collusion between government officials and social media companies. But the government answered by claiming some kind of executive privilege and would not fork over information.

An amended complaint added the fireworks: It documented that 50 government officials in a dozen agencies were involved in applying pressure to social media companies to censor users, reports Zachary Stieber of The Epoch Times.

That second filing might have flipped the switch and resulted in the judge’s decision to pull no punches. Indeed, it is a remarkable document, reproducing vast amounts of correspondence between government agencies and Facebook, Google and Twitter.

What you see here is not antagonism but obsequious friendship: ongoing, relentless, guileless, as if nothing could be wrong here. They knew what they believed to be the problem voices and were determined to stamp them out.

And that target included the documented censorship of top scientists associated with Brownstone Institute along with thousands of other credible experts and regular citizens who disagreed with the government’s extreme policy responseto COVID-19.

WUHAN-GATES – 52. Getting an HIV Vaccine: “May be the Real Goal behind SARS-Cov-2 Manmade”

Martin Kulldorff, Aaron Kheriaty and Jay Bhattacharya are represented in the filing by the New Civil Liberties Alliancewith Jenin Younes leading the legal team for the scientists.

Within weeks, we’ll have a better sense of whether and to what extent these individuals were the targets directly and how many other accounts were named in takedown orders.

For example, we know for sure that Naomi Wolf, another writer for Brownstone, was directly named in correspondence between the Centers for Disease Control and Prevention and Facebook.

Scandal on Vaccines for Children: GSK (Pfizer Partner) Funded with $18thousand a Member of CDC who Approved the Jabs since 5yo

All of this went on for the better part of two years, during which time the First Amendment was a dead letter insofar as it concerned COVID-19 information on platforms that are overwhelmingly dominant on the internet.

Through those means, individual citizens were restricted in their access to a diversity of views and instead inhabit a world of censorship and tedious hegemonic exhortation that has seriously hurt the credibility of the platforms that cooperated.

Finally we see courts coming around to the view that government needs to be held accountable for its actions. It is happening far too little and far too late but at least it is happening.

And at long last, we might gain a clearer look into the mysterious works of Fauci and its imperial reign over American public health during the worst crisis for constitutional rights in many generations.

by Jeffrey A. Tucker

Jeffrey A. Tucker, founder and president of the Brownstone Institute, is an economist and author. He has written 10 books, including “Liberty or Lockdown,” and thousands of articles in the scholarly and popular press. He writes a daily column on economics at The Epoch Times, and speaks widely on topics of economics, technology, social philosophy and culture.