The government in Kiev was behind the deadly shelling in Kherson and organizing the murder of two pro-Russian civilian officials in Berdyansk on Friday, Mikhail Podoliak, an aide to Ukrainian President Vladimir Zelensky, confirmed in an interview. However, Podoliak insisted these were not acts of terrorism but legitimate strikes against purely military targets.

“Everything that happened in Berdyansk, in Melitopol, in Kherson — those are all absolutely legitimate military targets. Those are certainly not terrorist or, strictly speaking, criminal acts,” Podoliak said.

At least three people were killed and 13 were wounded on Friday morning when five missiles from the US-supplied HIMARS launchers struck the administration building in Kherson, which is under Russian control. Most of them were civilian passers-by, local authorities said.

Kirill Stremousov, the deputy chair of the military-civilian administration, says the strike was intended to take him out. He survived only by chance, having accepted an invitation to appear in a TV talk show at the time of the shelling.

In Berdyansk, in the Russian-controlled part of the Zaporozhye Region, two officials of the local military-civilian administration were murdered on Friday morning. Oleg Boyko was in charge of housing and utilities, while his wife Lyudmila headed the local elections commission. 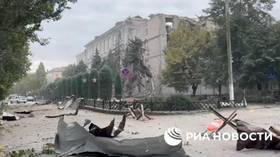 An explosion that could be heard in Melitopol on Friday was a controlled demolition of unexploded ordnance, local official Vladimir Rogov said. However, the city headquarters of the organization ‘Together With Russia’ was damaged by a bomb last week.

Podoliak did not take credit or for the assassination of the Lugansk People’s Republic head prosecutor Sergey Gorenko and his assistant Yekaterina Steglenko. They were killed on Friday when an improvised bomb detonated at the Prosecutor General’s Office in Lugansk. Assassinations by Ukrainian agents have claimed the lives of a number of Donetsk and Lugansk officials over the past seven years.

Russian President Vladimir Putin said on Friday that Ukraine has engaged in “terrorist attacks” against civilians and infrastructure, including attempts to damage nuclear facilities inside Russia. This behavior was unacceptable, he said, and if Kiev persists it will receive a “more serious” response from Moscow than a handful of “sensitive strikes” that damaged power stations and dams this week.