Finally, we get to see the film that Israel banned after her murder

Israel attacked an Israeli Jewish Director to get her film banned worldwide.  And they were successful. Why?

But now, we can watch the film in its entirety.  It’s been available since 2012.  But why did they get banned on the net?  Who was behind this?  Now, the film is buried under the weight of time, a time that people have forgotten.  But not this activist.  We will NEVER forget the American Hero Rachel Corrie.  Decorated around the world, except in the USA, where her home citizens have NEVER even heard of her.

The uproar was caused by the film called Rachel a film by Israeli Director Simone Bitton, a Jewish activist for peace.  The Zionists went after Simone Bitton and the campaign to boycott the film went full force.

NEVER FORGET RACHEL CORRIE…
P.I.P: Rachel Corrie, an Human rights activist member of the International Solidarity Movement was killed by an Israeli Army bulldozer in March 2003.  She was a
23-year-old coed from Oregon, an American citizen named Rachel Corrie. Neither the Israeli nor U.S Government has ever offered an explanatory apology.

Below you will find some interesting information about the film and the efforts to keep it from the public eye…. The following is from an entry on Daily Kos…

The San Francisco Jewish Film Festival, the largest Jewish Film festival in the world, will screen many films this year, many with discussions with filmmakers and others featured in the film. Some of these films will be controversial, there will be all sorts of issues explored.

None has generated more controversy than the film “Rachel”, a film by Jewish-Israeli filmmaker Simone Bitton about the death of Rachel Corrie, the young woman killed by an Israeli-military bulldozer as she was protecting homes in Rafah, Gaza. At the request of the filmmaker, they have invited Cindy Corrie, Rachel’s mother to speak. Big-time controversy and condemnation by a weekly Jewish magazine and even from the local Israel Consul General.

Cindy Corrie has publicly advocated for ensuring “justice, freedom, security and economic viability for both Israelis and Palestinians.”

“The San Francisco Jewish Film Festival made a serious error in judgment in inviting Mrs. Corrie to the festival,” Israel Consul General Akiva Tor said via e-mail. “She is a propagandist who is immune from responsibility for the causes she supports because it was her daughter, Rachel, who was accidentally killed.

“So her staged presence becomes a kind of emotional grandstanding, rather than the pursuit of a deeper insight.”

Propagandist? The Consul General has been busy supporting policies of expanding settlements in the West Bank, supporting the war on Gaza, supporting a brutal blockade, and now will be supporting a policy of muzzling Palestinians, and Jewish Israelis, who dare to commemorate the Nakba of 1948.

The Foreign Minister, his boss, is seen by many (even Israeli diplomats) as extreme as fascist Haider of Austria… and this man is calling Cindy Corrie a “propagandist”?  Cindy Corrie, who wants justice, freedom, security, and economic viability for both Israelis and Palestinians?

I think it’s a way of saying there is a point of view that the Consul General finds might disturb the status quo. Change might happen. Scary. Also, a way to challenge the official narrative. “accidental” he says. That’s the official line. Not so fast. Maybe not an accident. as perhaps the deaths of hundreds of civilians in the war on Gaza of December/January is perhaps not an accident, or the continuing blockade that brings hunger to the people of Gaza is not an accident.  Perhaps the latter atrocity is nothing more than a joke among its designers.

Jewish Voice for Peace, a national group based in the Bay Area, is one of the groups co-sponsoring this film, and they are to be commended for their courage, as well as the festival organizers. Compare this to the sometimes successful effort to not allow the staging of the play: “My Name is Rachel Corrie” at several theaters around the country (which helped tremendously, no doubt, with publicity and its success where it was produced).

Footage from Rachel’s murder by the Israeli Defense Forces. Actual cockpit transmission from the D-9 bulldozer driver to the watch tower, saying he “hit an object” and “I think the object got hit by the dobby (D-9) and he is in a severe condition.” He is asked “Did you see him?” and responds “Yes I saw him, I think he is dead.”

Here is how Cecilie Surasky of Jewish Voice for Peace responds to J Weekly’s editorial opposing the presence of Cindy Corrie.

There’s something so deeply, deeply depressing about the attack against Cindy Corrie by J Weekly, the Bay Area’s Jewish newspaper. True, it’s just one of countless examples of the moral malaise that plagues the institutional Jewish world when it comes to Palestinians, but on this day, this day when I am fresh back from Gaza, from Hebron, from Silwan, it has gotten to me.

Change is happening, both in the Jewish Community and the wider community, and the keepers of the status quo cannot shut it down. that’s not to say they are not trying. This should be seen in the wider context. In Israel, beyond the attempt to erase “Nakba” from the history books, (see Assaf’s diary)there is also the arrest and detention of Jewish groups who desire a different future for Israel, not based on militarism and oppression. The government must resort to repression not just of Palestinians, which is a widely-accepted Israeli tradition, but now even Jewish dissidents. It is the criminalization of dissent, by any means necessary.

It won’t work. Arrests will not work. Personal attacks will not work. Like the ones that will accumulate below, more likely than not, some based purely on the idea that most of my diaries deal with the oppression of Palestinian rights… what if I were focusing on the Health Care debate… would there be this wild accusation without basis if I was consistently unfriendly to insurance company policies? Is there some mathematical formula to determine one’s “acceptable” criticism of Israel? It really is nothing less than a lame attempt to avoid dealing with substances and diverting people’s attention.

This movement to demand justice in the Middle East is already too large, and too diverse for that to work. They will call Rachel and her mother “terrorist sympathizers” who have no business going to Gaza. Like they say that Ezra Nawi has no business protecting homes in the West Bank. Like others said that Andrew Goodman and Michael Schwerner had no business going to Mississippi to support the movement for justice there. Or like others said that Ita Ford, Maura Clarke, Dorothy Kazel, and Jean Donovan had no business in El Salvador.

It is our business to share in the struggle for human rights and peace.

Rachel will be shown on Saturday, July 25th, at 1:30 pm at the beautiful Castro Theater in San Francisco. Cindy Corrie Will be there. 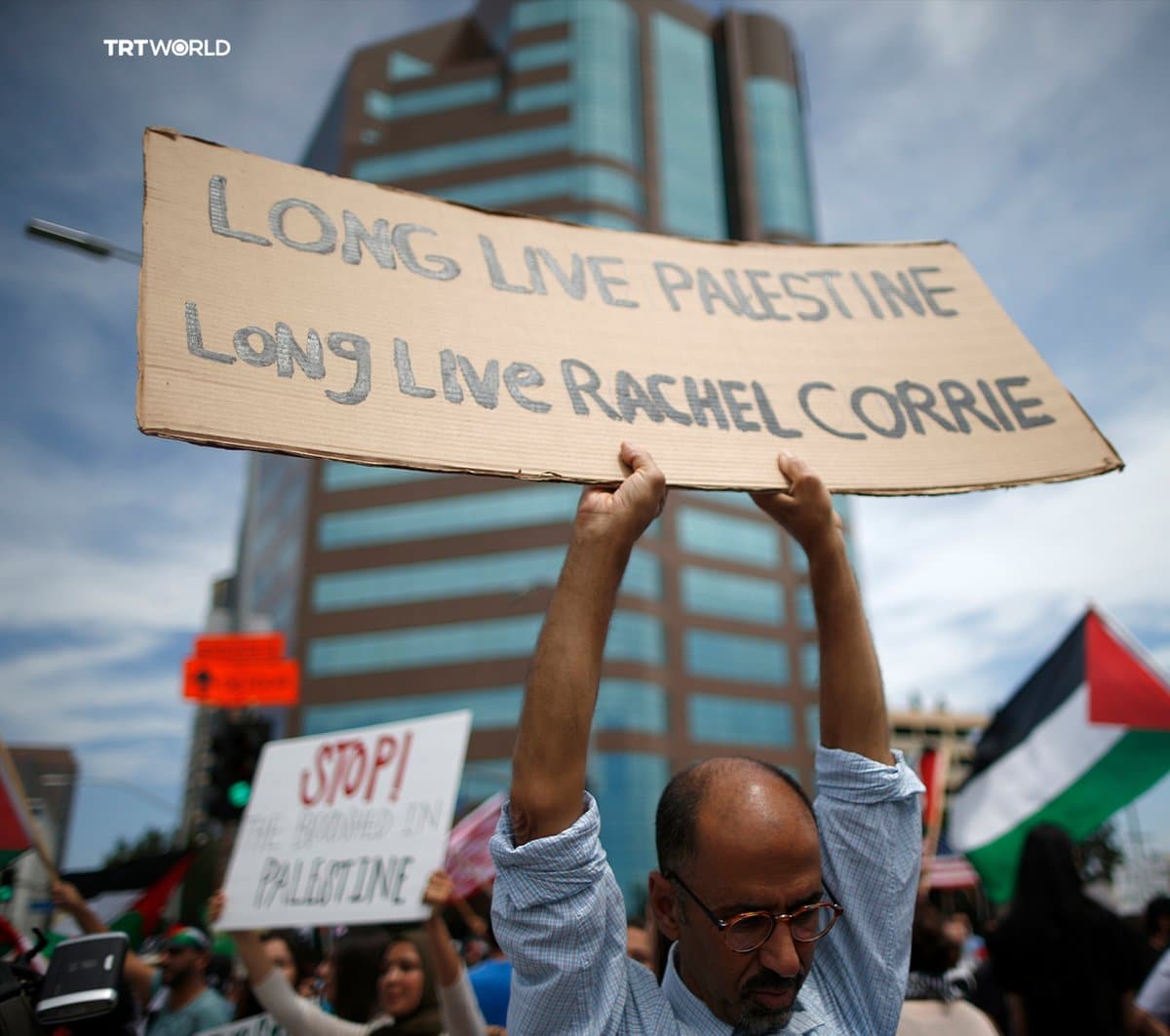 Here is the Statement from the organizers of the San Francisco Film Festival….on why they are screening Rachel

1. The film Rachel is directed by veteran filmmaker Simone Bitton, a dual citizen of Israel and France. The documentary takes an unflinching look at the controversy surrounding the death of an American activist who was protesting Israeli military actions in Gaza. In the film, Bitton, through interviews with eyewitnesses, Israeli soldiers and spokespeople, and others close to the tragedy, exposes new information about the incident which we believe makes for very worthwhile viewing, from both a journalistic and an aesthetic perspective. The film has already played in such prestigious festivals as the Berlin International Film Festival and Tribeca Film Festival (New York).

2. The film Rachel includes the viewpoints of people with a variety of opinions on the events which led to Ms. Corrie’s death. It includes interviews with Israeli army spokeswoman Avital Leibovitch, as well as doctors, activists, soldiers, Israeli and Palestinian civilians, and Rachel Corrie’s parents. The film also includes a military video from the Israeli army.

3. As with all the films we show at SFJFF, we are presenting the views of the filmmakers and their subjects in what we hope is an atmosphere that encourages free expression and public debate.

We regret that the filmmaker of Rachel could not be present to discuss the film personally, although we invited her to be here. Cindy Corrie, Rachel Corrie’s mother, is a subject of the documentary, and it is customary (and even expected by audiences) for documentary subjects to participate in Festival screenings.

This kind of exchange has occurred throughout our Festival’s long history, and Cindy Corrie herself has addressed audiences at the Tribeca Film Festival, presentations in New York theaters, and other cultural forums. We wish to provide our audiences with the same opportunity. Her appearance at SFJFF is not intended to provide a political platform but rather to deepen the dialogue around the film. Cindy Corrie has publicly advocated for ensuring “justice, freedom, security and economic viability for both Israelis and Palestinians.” We think it will be an illuminating conversation.

4. We are presenting the film as part of a wider series on social justice and activism, and want our audience to have the benefit of a direct encounter with those who can help them understand Rachel Corrie’s motivations ] even if they don’ agree with them ] from a very personal standpoint. The filmmaker considers herself a film essayist rather than a reporter and desires the film to be viewed as an artistic statement as well as an investigation.

5. SFJFF’s commitment to Israeli filmmakers and cinema is steadfast. We are proud that this year we are showcasing 37 individual films from or connected to Israel –comedies, dramas, documentaries, animation, and shorts –which together form a very vibrant portrait of the country and its complexity. Other political affairs documentaries besides Rachel include Gilad Shalit: 2 Years in Captivity, a portrait of Gilad Shalit, the soldier captured by Hamas; and Chronicle of a Kidnap, a portrait of Karnit Goldwasser, the widow of Ehud Goldwasser, an Israeli soldier who was one of many victims of the Lebanon war.

6. The SFJFF supports the democratic exchange of ideas that great filmmaking provides. We believe that the best artists, including documentary filmmakers, create work that makes us think and sparks a dialogue both within the Jewish community and the greater community of the Bay Area. We do not expect that the views of every film or speaker will be embraced by all of our audiences, nor can every film represent the diverse views of SFJFF staff, board, members, or sponsors. We unanimously embrace the tradition of spirited debate which is a core element of Jewish inquiry and strive to provide a welcoming forum for the discussion of different perspectives.