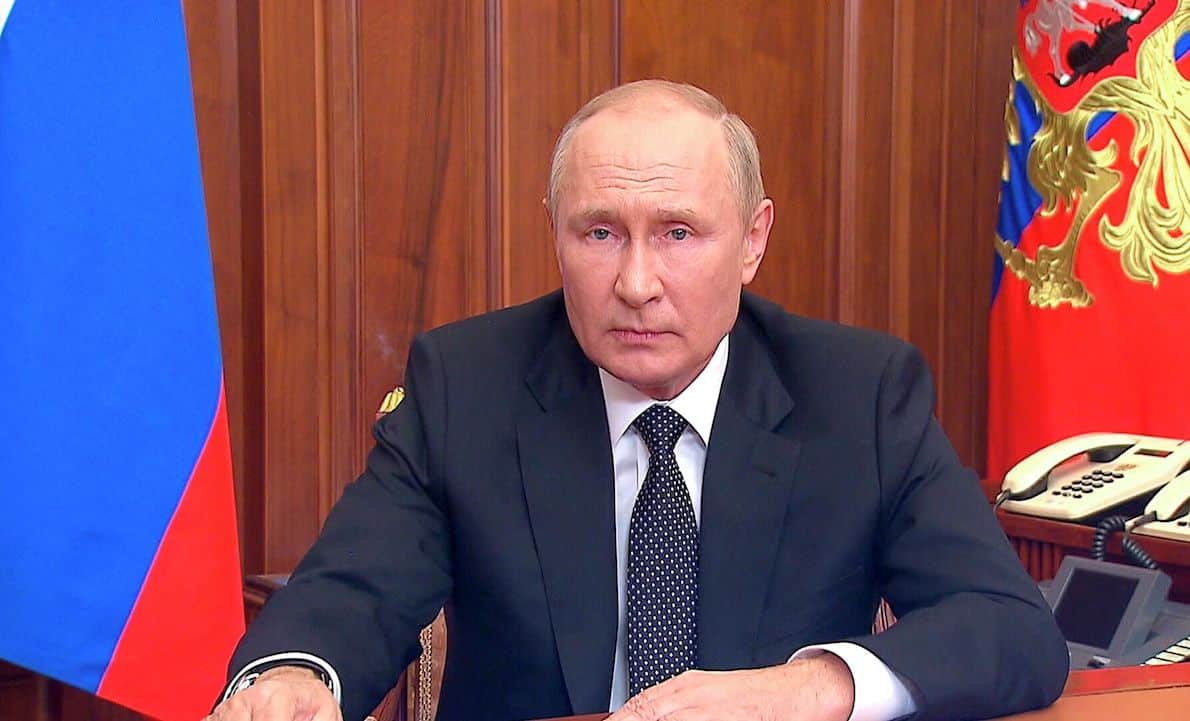 In an address to the nation on Wednesday, Russian President Vladimir Putin focused on a number of pressing issues related to the West’s stance on Russia and Moscow’s ongoing special military operation in Ukraine.

‘The West Wants to Destroy Russia’

Putin pointed out that the West’s current goal is to destroy Russia, as they say openly that they managed to make the USSR collapse and now it’s time for Russia.

“The purpose of this West is to weaken, divide and ultimately destroy our country. They are already directly saying that in 1991 they were able to split the Soviet Union, and now the time has come for Russia itself, and that it should disintegrate into many mortally warring regions and regions,” the Russian president stressed.

According to him, such plans have been hatched in the West for a long time, as they encouraged gangs of international terrorists in the Caucasus, promoted the installation of NATO’s offensive infrastructure close to Russia’s borders and made total Russophobia their weapon.

Putin said that the Western elites are targeting Russia with their aggressive policy in order to maintain their dominance.

“[We talk] about the aggressive policy of a number of the Western elites, who are striving with all their might to maintain their dominance, and for this purpose they are trying to block or suppress any sovereign independent centers of development in order to further brutally impose their will on other countries and nations, to plant their fake values,” according to the Russian president.

Putin also said that the West “has crossed every line in its aggressive anti-Russian policy,” adding that “we constantly hear threats against our country and our people.”

“Some irresponsible politicians in the West talk about plans to organize the supply of long-range offensive weapons to Ukraine, systems that are capable of launching strikes against Crimea and other regions of Russia”.

According to the Russian president, such terrorist strikes, including those using Western weapons, are already being carried out on settlements in Russia’s Belgorod and Kursk regions.

Putin announced that in light of the latest developments in Donbass, he had signed a decree on partial mobilization in Russia.

“In this situation, I consider it necessary to take the following decisions, they are fully adequate to the threats we face. Namely: to protect our Motherland, its sovereignty and territorial integrity, to ensure the security of our people and people in the liberated territories, I consider it necessary to support the proposal of the Ministry of Defense and the General Staff on conducting partial mobilization in Russia,” the Russian president said.

He added that mobilization will begin on Wednesday, noting that only reservists will be subject to conscription, first of all those who have relevant experience and military professions.

Russia to Help Maintain Security at Referendums in Donbass

The Russian president also said that Russia will do everything to ensure security at the upcoming self-determination referendums in Donbass and other Ukrainian regions which have appealed to Moscow, seeking its support.

“The parliaments of the people’s republics in Donbass as well as civil-military administrations of the Kherson and Zaporozhye regions have decided to hold the referendums on the destiny of these territories and appealed to Russia, asking to support this step. I stress that we will do everything to ensure security at the referendums for people to express their will,” Putin underscored.

Putin also referred to “the policy of intimidation, terror, and violence” pursued by Kiev with respect to Donbass residents, a policy that Putin said becomes “more massive, terrible and barbaric.”He noted that Kiev’s regime of repressions against its own citizens established shortly after the 2014 armed coup had been strengthened across Ukraine.Putin emphasized that he knows that “the majority of people living in the territories liberated from neo-Nazis, including first of all the historical lands of Novorossiya, do not want to be under the yoke of the neo-Nazi regime.”

“In Zaporozhye, the Kherson region, as well as Lugansk and Donetsk, people have seen and are seeing the atrocities that neo-Nazis conduct in the occupied areas of the Kharkov region. The heirs of Bandera and Nazi punishers kill people, torture, throw them in prison, settle scores, crack down, abuse civilians”, the Russian president said.

He added that up to 7.5 million people lived in the Donetsk and Luhansk People’s Republics (DPR) and (LPR) as well as the Zaporozhye and Kherson regions before the outbreak of hostilities.

“Many of them were forced to become refugees and leave their homes. Those who remained – about 5 million people – today are subjected to constant artillery and rocket fire from neo-Nazi militants, who hit hospitals and schools and organize terrorist attacks against civilians. We have no moral right to hand over people close to us to be torn to pieces by executioners, and we cannot but respond to their sincere desire to determine their own fate,” Putin underlined.

Touching upon Russia’s ongoing special military operation in Ukraine, Putin said that Russian forces are acting competently, liberating the territory step by step.He noted that the Lugansk People’s Republic had already been almost completely cleared of neo-Nazis, and that fighting in in the Donetsk People’s Republic is underway.

“The Kiev occupation regime has created a deeply echeloned line of long-term fortifications. Directly assaulting them would have resulted in heavy losses, which is why our units, as well as those of the Donbass republics, act competently and use the military in order to protect personnel. They, step by step, are liberating Donetsk land, clearing cities and towns from neo-Nazis, and helping people whom the Kiev regime has turned into hostages and a human shield,” Putin said.

He stressed that the main goal of the Russian special operation in Ukraine remains liberation of Donbass.

Putin announced the special operation to demilitarize and de-Nazify Ukraine on February 24 following the Donbass republics’ requests to protect them from Kiev attacks.