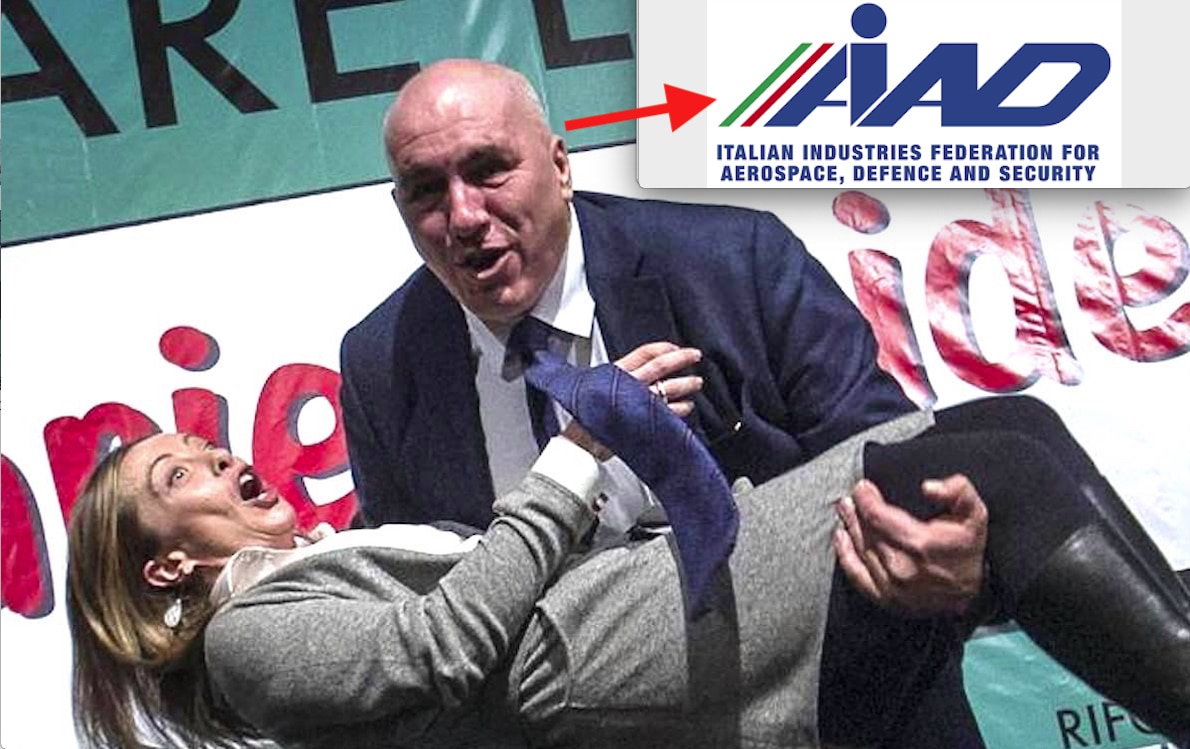 In the cover image from a stock photo Guido Crosetto, president of the Italian Defence Industries Federation and founder of Fratelli d’Italia, holds Giorgia Meloni in his arms

The zealous goats, that is the Italians all attached to the fear of losing their small privileges in a transatlantic Italy that has been sinking for years, have voted. As was widely predicted by the polls prior to these parliamentary elections, the only heroine credited by the mainstream media won: it won the NATO Weapons Lobby!

Giorgia Meloni, leader of the Fratelli d’Italia, which becomes the first Italian party surpassing the Democratic Party (the exact numbers are yet to be defined but the projections leave no doubt about the victory already accredited by the BBC) and dragging the Center-right coalition (Lega, Forza Italia and other minor parties) above at 40%, she is not the real winner of the electoral challenge, she is not even the real future Prime Minister who for the first time in the history of the beautiful Mediterranean country will be female.

Meloni is the right-hand copy of Ursula von der Leyen who has been acclaimed President of the European Commission.

The leader of the Fratelli d0 Italia (Brothers of Italy), thanks to her crude jokes and full of demagogic promises with Theatercracy, managed to convince a sufficient number of Italian idiots that she could represent the Great Change while in reality she will be only the fragile heir, and easily blackmailed by Bruxelles, of the outgoing premier Mario Draghi.

She, just like him, also cultivates, more in appearance than in substance, Catholic values ​​which, however, have not yet managed to induce her to marry in a Christian marriage with her partner from whom she had a daughter.

Those who accused the leader of the Fratelli d’Italia of having fascist nostalgia are partly visionary and partly myopic: visionary because in the era of the New World Order left and right have been buried since the Patto de Nazareno which in 2014 Silvio Berlusconi, leader of Forza Italia, he signed with the Democratic Party to send the secretary Matteo Renzi to the Presidency of the Council of Ministers, although he was not even a member of parliament.

In the US, the same political spell occurred when GOP (Republican) veteran George Bush jr endorsed the Democratic candidate Joseph Biden to counter Donald Trump who was showing signs of intolerance at the repeated impeachments initiated by the Democrats but actually built by the 007 of the CIA, the American counter-espionage, at the service of the New World Order by now replacing the Deep State also in Washington.

But those who consider Meloni a fascist are also short-sighted because they have not understood that the NATO Weapons Lobby  to which she has bowed, after a life as a professional politician since her youth, would not allow her to express a minimal tendency of the extreme right: this political copyright is granted only to the neo-Nazi regime of Ukrainian President Volodymyr Zelensky, which the leader of the Brothers of Italy has repeatedly said she intends to support.

At the cost of starving the Italians with an explosion of increases triggered by energy, complete with speculation by multinationals, and by inflation on raw materials.

This is why Meloni’s expected and full-blown victory is not the result of her genius but that of the one who founded Fratelli d’Italia with her: Guido Crosetto, former Piedmontese regional coordinator of Forza Italia, who in recent years has become a leading figure shadow of the spotlight but at the center of the most profitable trades in the world: the Weapons Lobby.

In order not to give up his role as president of the AIAD (Italian Industries for Aerospace, Defense and Security), which also includes Ampam (National Association of Sports and Civil Weapons and Ammunition Manufacturers), he has renounced a definitely winning candidacy in Parliament.

“I am not a candidate for anything – Crosetto declared a few days ago in a meeting with entrepreneurs in Pesaro – and it is useless for them to say that they will offer me a position as minister because then it’s my turn to sign and I don’t care, also because I already resigned as parliamentary ”

On the other hand, he nominated his thirty-year-old nephew Giovanni on the chamber list of the Piedmont College 1 in Turin, the capital where in the wake of the inevitable guru of the New World Order Bill Gates, the military projects of the Aerospace District and the DIANA plan on artificial intelligence in military technologies.

We have already written all these things before Meloni’s victory hoping that they will serve to instill the doubt that she could represent a change. That was not the case!

Obviously you will be under special surveillance by the Head of State and the EU Commission and, therefore, you will have to adapt to the policies of Brussels at 360 degrees if you want to see PNNR funding, the EU post-pandemic relaunch funds.

This is why the only certainty of his next government, if Berlusconi (Forza Italia) does not betray it to make another alliance with the Democratic Party and the 5 Star Movement reborn under a semblance of renewal also masked by the dramas of Giuseppe Conte (another man built by Mattarella and therefore referent to him), will be the following: war,hunger and vaccines to the bitter end for all of Italy.

I will be delighted to take back every word of this article if the probable future Prime Minister Meloni will prove capable of resisting the oppressions of the New World Order, devoid of human intelligence as evidenced by one of our acute columnist.

If in Italy it had won the Democratic Party with the center-left it would certainly not have gone better.

But at least in the hearts of true conservatives would have remained the faded dream of finding a moderate right capable of fighting the potentates who led NATO to ignite a suicide war in Ukraine with the 2014 bloodthirsty coup in Kiev and the subsequent civil war in the Donbass. which pushed Russia to start the military operation to protect the pro-Russian separatist republics (currently voting for annexation to the Moscow Federation).

Blessed are the goats who still haven’t understood it!

Tomorrow, with no bowls, we will write about the defeat of the NO VAX who believed they could have political ambitions only by feeding and nourishing their followers with the two most ignorant tools in media history: social media and videos, built on purpose by the New World Order to make believe to influencers, without art or part, to be able to count for something …