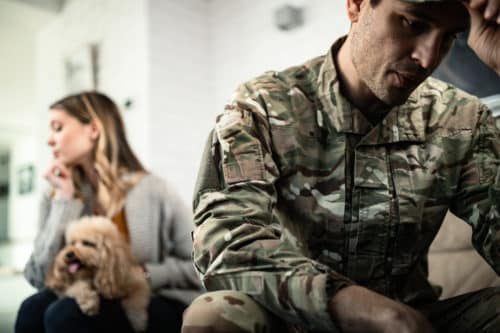 Conflict, arguing, and a lack of commitment are some of the most common reasons for the average couple’s divorce proceedings, but the reasons why military couples part ways can sometimes be quite different. If you’re curious about what puts the most strain on a military couple’s relationship to better understand the issues and potentially resolve them in your own relationship, you can learn about some of the more common ones below.

Many couples want to settle down and move into a home they’ll eventually raise their families in. However, you might be eager to talk to an attorney for divorce if you’re struggling with constantly moving around as the spouse of someone in the military.

Many soldiers are shifted to various training camps and bases, not including deployment and overseas posts. Having to uproot your family’s lives multiple times and never getting the opportunity to lay down permanent roots can take its toll.

Infidelity can happen in any relationship, and military relationships are no different. Soldiers on deployment working in high-stress environments can sometimes bond with their fellow soldiers, feeling like they can relate better to each other than their spouses back home. Those spouses at home can also struggle with loneliness, leading them to seek out comfort in the arms of someone else.

Soldiers can be deployed for months on end, and while it’s easy to assume that distance makes the heart grow fonder, that’s not always the case. Couples can naturally drift apart, form separate lives, and struggle to reconnect with each other when they’re reunited. In this instance, there’s no single reason for getting a divorce. Instead, it can simply be a case of no longer having the same attraction, feelings, and connection as they once did.

Most single parents know how hard it is to raise children on their own, but they do it because they don’t always have any other choice. However, being married to someone in the military means they often raise their children on their own while their spouse is deployed, and some spouses can feel like they’re giving up their own career aspirations to be full-time single parents. Sometimes, resentment toward this lifestyle can build up over time, leading to relationship breakdowns that sometimes result in divorce.

Many military spouses establish routines that work for them when their loved one is deployed. They’re the head of the household, the decision-maker, and the sole caregiver for their family. However, roles can become muddled when a spouse returns from deployment. Suddenly, the at-home spouse has to relinquish some of their roles and naturally hand over some control.

While this might be easy to manage if it were a permanent arrangement, it can sometimes cause friction when the at-home spouse has to re-establish their routine when the military spouse is deployed once more. The confusion of the roles and unusual family dynamics can sometimes be too much for spouses to manage, resulting in divorce.

Military couples can divorce for many of the same reasons traditional couples do, but the situations can sometimes be more complicated. If you can relate to any of these situations above and believe divorce is in your family’s best interest, now might be the right time to seek legal help and make a plan of attack.

SOURCEMilitaryonesource.mil
ATTENTION READERS
Due to the nature of independent content, VT cannot guarantee content validity.
We ask you to Read Our Content Policy so a clear comprehension of VT's independent non-censored media is understood and given its proper place in the world of news, opinion and media.