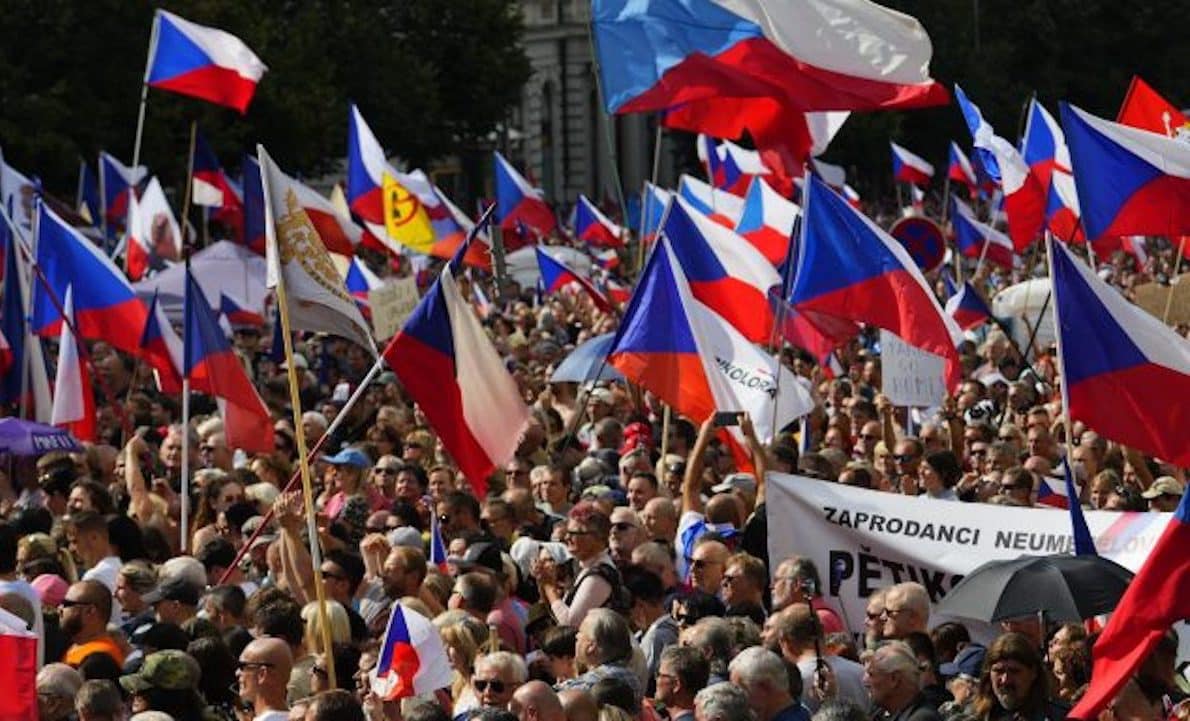 Tens of thousands of people took to the streets today Prague against the Czech government, demanding an end to the sanctions against Russia and the resignation of the government of Prime Minister Petr Fiala. At the beginning of the event, which took place under the slogan “Czech Republic First”, a band considered far-right played the national anthem. Also present at the demonstration was a German MEP from AfD, Christine Anderson, who said: “Your struggle is my struggle”.

Other demonstrations were held in the cities of Brno and Ostrava. Fiala’s center-right coalition of five parties is under pressure from rising energy prices. The government responded with an aid package that includes caps on electricity and gas prices for families and small consumers. For large industrial consumers, the council of ministers has provided subsidies for the equivalent of 1.2 billion euros.

In the past few weeks we have written about the English police that are preparing for large street protests after the warning by the Mayor of London about the risk that in the next winter there would be no primary goods in supermarkets due to crazy gas prices. .

As you know, these are partly caused by the war in Ukraine which triggered a series of chain rejections that began with the blockade of Nord Stream 2 decided by Germany under pressure from the EU and continued with reductions in supplies by Moscow in retaliation. to heavy economic sanctions against Russian politicians and companies.

But as highlighted by UN Secretary General Antonio Guterres, the situation was aggravated by the “grotesque greed of the multinationals” who speculated on the insane decision of the European Union to buy more supplies of the very expensive Liquefied Natural Gas from the USA.

The issue has taken hold in all European countries without anyone, with the exception of the Hungarian Prime Minister Victor Orban who has strengthened the agreements with the Russian Gazprom for an increase in supplies, irritating Brussels, has taken a position against the guidelines of the EU Commission. led by Ursula Von der Leyen, recently revealed to be a puppet in the hands of Bill Gates who is carrying out various military projects with NATO also thanks to the consolidated friendship with the Norwegian Jesn Stoltenberg, former director of the NGO Gavi alliance founded by Gates himself .

In this very disturbing scenario, the alarm launched by the geopolitics and intelligence site The Soufan Center, which focuses with concern on the massive protests that have occurred in recent weeks in Prague, assumes great importance. Let’s see what he wrote. All links to Gospa News articles have been added aftermath.

INTEL BRIEFING BY THE SOUFAN CENTER

Earlier this month, in the Czech Republic (Czechia), an estimated 70,000 demonstrators descended on Prague’s central Wenceslas Square to protest the country’s pro-Western government. The protest came just a day after the government survived a vote of no-confidence, proposed by opposition parties over accusations that the government has failed to tackle acute energy and cost of living crises. 84 lawmakers voted to oust the cabinet, which was 17 votes short of achieving the majority necessary.

Protestors representing political parties from both the far-right and far-left joined forces at the “Czech Republic First” rally, demanding the resignation of the current coalition government led by Prime Minister Petr Fiala and voicing indignation over the government’s pro-Ukrainian following Russia’s invasion. Protestors demanded an end to Western sanctions against Russia, which they view as the root cause behind the soaring power costs plaguing Europe since Russia curbed gas supplies earlier this year.

At the protest, several banners read, “The best for the Ukrainians and two sweaters for us” – referring to a tone-deaf remark by the head of the country’s parliament in which she called on citizens to wear sweaters indoors as they face concerns over heating costs this winter. Further, the slogan encapsulated protestors’ frustrations over the 400,000 Ukrainian refugees accepted into the country and the significant aid supplied by the Czech government to Ukraine, which demonstrators claim is provided at the expense of Czech citizens. Zuzana Majerová Zahradníková, a leading figure in the far-right, Eurosceptic Trikolora party, epitomized such sentiment stating, “Fiala’s government may be Ukrainian, it may be Brussels, but it is definitely not Czech.”

Punctuating the atmosphere of discontent were T-shirts, banners, and slogans brandished by demonstrators praising Russian president Vladimir Putin and expressing both anti-EU and anti-NATO sentiment. This imagery led some analysts and Czech leaders to blame Russian propaganda as the impetus for the demonstration, which has utilized mis-, dis-, and mal-information (MDM) as a key tactic to influence public opinion in its favor and muddle the narrative in support of Ukraine.

Prime Minister Fiala, the leader of the center-right governing coalition, characterized the protest as “pro-Russian” and antithetical to national interests. Leaders and activists at the protest – representing groups as disparate as the anti-migrant, right-wing populist Freedom and Direct Democracy party to the Czech Communist party – refuted depictions of demonstrators as pro-Russian propagandists, reiterating discontent with the increased cost of living, skyrocketing energy prices, and the country’s membership in the EU, NATO, and the World Health Organization (WHO).

As inflation and energy costs have soared in recent months, the number of Czechs falling below the poverty line has doubled. This tangible economic hardship, coupled with a sense of abandonment by the government and growing anti-establishment sentiment, has created an ideal atmosphere for the politics of resentment.

Capitalizing on this environment, far-right and far-left groups, with their seemingly incongruent politics, have coalesced around pro-Russian positions. This union across the political spectrum reflects years of concerted effort by Moscow, which has exploited frustrations with Brussels, discontent with both the governing establishment and institutions, and general societal rifts in Europe to cultivate pro-Russian politicians and allies.

With these sentiments seemingly resonating, many European leaders have begun to worry that popular support for Ukraine will wane as the economic costs of that support rise and the conflict drags on, particularly through a winter when many citizens will struggle to pay their heating bills. Moreover, this type of political mobilization is not isolated, as a spillover effect is well underway, with far-right and far-left leaders in Germany planning similar protests over inflation and economic concerns.

Shmitah: The Year of Jewish Disasters. Energy Crisis is the New 9/11. Conspired as the First One!

The proposed measures, which are still subject to change, would allow excess revenues from non-gas fueled power plants to be utilized by governments to help businesses and consumers with their bills. EU energy ministers will negotiate the bloc-wide proposals and attempt to approve the measures at an emergency summit on September 30.

Whether such action tempers the discontent, curtails energy prices and inflation, and demobilizes coalescing far-right and far-left groups is still to be seen. However, the success of far-right populist parties in several recent European elections indicates that sentiments expressed in Prague earlier this month could be a harbinger of political movements yet to come.

Originally published by THE SOUFAN CENTER