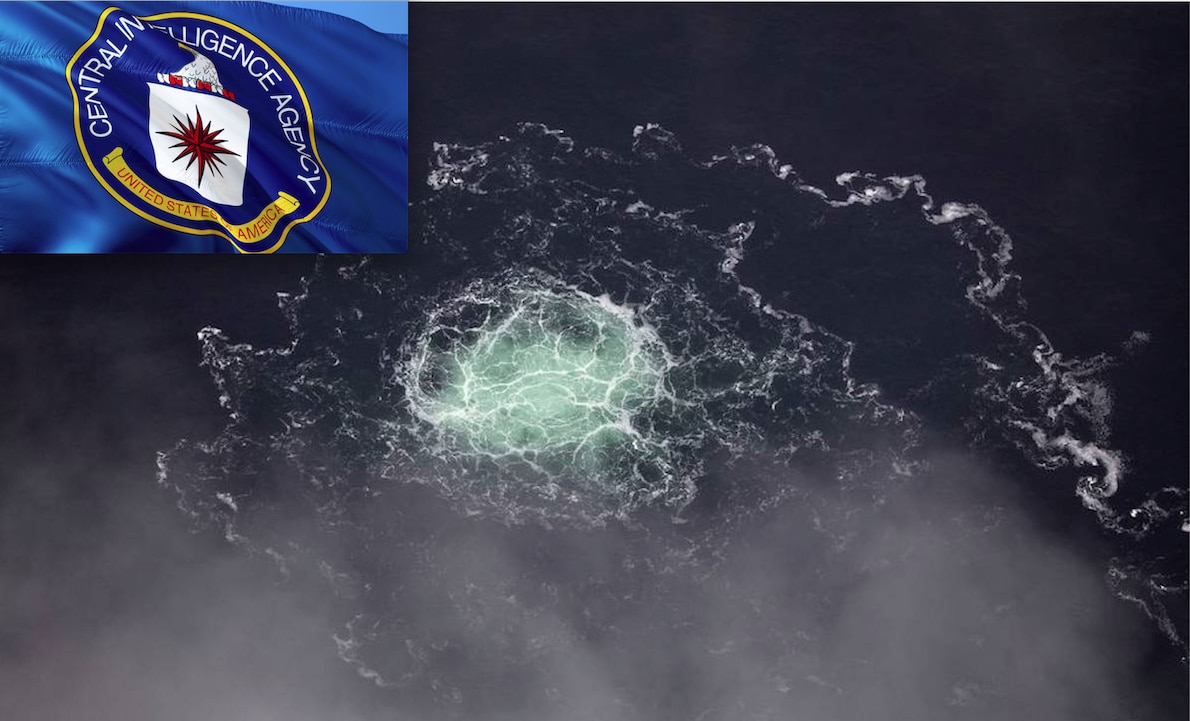 The scale of destruction at the Nord Stream gas pipelines indicates that it was some kind of terrorist act, Kremlin spokesman Dmitry Peskov said on Thursday.

The incidents are being investigated by the Russian Prosecutor General’s Office, as well as Swedish and Danish authorities.

«The explosions on the Nord Stream pipelines are an “international terrorist act,” with the so-called collective West hiding the true perpetrators, said the Russian Foreign Intelligence Service (SVR)» according to Sbetlana Ekimenko, Sputnik International journalist..

Russia already has materials that “point to the Western footprint in organizing and carrying out” the blasts, SVR chief Sergey Naryshkin told reporters.

Earlier, on September 28, Kremlin spokesman Dmitry Peskov said that the scale of destruction at the Nord Stream 1 and 2 pipelines from Russia to Germany indicated that it was some kind of terrorist act.

Even just imagining that Russia may have sabotaged its Nord Stream gas pipelines in the Baltic Sea to create energy supply problems for the countries of the European Union and, in particular, for Germany, which first received the flow, is like thinking that the Russian president Vladimir Putin may detonate a bomb in the Kremlin tomorrow to accuse his NATO opponents of an attack.

Unfortunately, Italian and Western journalists consider this hypothesis equal to the possibility that instead it was the USA that planned 3 explosions that caused at least 4 leaks in the two gas pipelines, the Nord Stream 2 that never came into operation and the Nord Stream 1 that supplied supplies. limited due to multiple technical maintenance carried out recently.

An Indian counter-information media (GreatGameIndia, link at the bottom of the page), on the other hand, have a good memory and recall the warning made by the CIA (Central Intelligence Agency), the very powerful and notoriously criminal American counter-espionage, precisely in relation to the pipes they carried gas from Russia to Europe.

Everyone agrees that it was not an accidental event: Moscow accuses Washington of rebounding all charges. Sweden’s Coast Guard has discovered the third leak, Denmark and Norway claim it was an attack, and the Oslo army has tightened up protections to marine infrastructure.

“All the information currently available indicates that it is the result of deliberate, reckless and irresponsible acts of sabotage.” Thus NATO regarding the leaks in the Nord Stream 1 and 2 gas pipelines.

“The damage arouses deep concern,” continues the note from the Alliance. And it says it is ready “to respond unitedly and with determination to any deliberate attack against the critical infrastructures of the allies.”

As highlighted by various experts, very powerful explosives were needed to create the four “holes” in a pipeline that has at least 5 centimeters of stainless steel and is wrapped in other protective metals for a thickness of about 10.

Björn Lund, a seismologist at Uppsala University had already said that two explosions had been recorded near the leaks, the first, at 02:03 on the night of Monday 26 September, near the gas leak on Nord Stream 2, south- east of Bornholm: “Measured with a power of 1.8 on the Richter scale”. The second explosion occurred near the two leaks on Nord Stream 1, near Simrishamn: “Recorded at 19:04 on Monday, with a magnitude of 2.3: more than five times more powerful than the first explosion”.

According to the Swedish maritime administration, the leak is between the two previously identified, on the Nord Stream 1 at Simrishamn, although in reality – according to the Swedish newspapers – it comes from the Nord Stream 2 which runs parallel. The minor leak was not visible on the radar “because it was too small”, the Coast Guard identified it, flying over the area.

According to some experts of military geopolitics, the attack could have been perpetrated even with a simple ship in transit on the Baltic Sea that could have lowered some explosive barrels with at least 1 ton of dynamite (or other explosives), necessary to justify the telluric reaction. , according to a strategy already used in the Second World War to sink submarines.

It is corroborated by the fact that the attackers did not need to hit a “precise” target but any stretch of the pipeline was sufficient.

THE NATO EXERCISES NEAR NORTH STREAM

«The Nord Stream incident took place in an area controlled by US intelligence. It happened in the commercial and economic zone of Denmark and Sweden, NATO allied countries, full of US weapons. They are the same countries completely controlled by US intelligence … that monitored the situation,» said the Russian Foreign Ministry through the mouth of the spokeswoman Maria Zakharova.

The Kremlin adds that it does not know if the Nord Stream can be restarted after the damage suffered. Precisely for this reason the United Nations Security Council will meet for an emergency session on gas leaks at Nord Stream 1 and 2 on Friday, at the request of Russia.

“In July, there were NATO drills with the use of deep-sea equipment in the area of the island of Bornholm,” she said.

Zakharova also stressed that the region was crammed with NATO infrastructure.

But now let’s see what the mainstream media failed to remember.

The US Central Intelligence Agency (CIA), according to the German magazine Spiegel, recently alerted Berlin about the growing likelihood of a deliberate attack on the Nord Stream pipeline network.

According to unidentified sources cited by Spiegel, the CIA informed Berlin about potential NS1 and NS2 assaults in the summer.

Russia could have pulled off such an attack but “It is difficult to see whether Russia or Ukraine could have an interest in such an incident” pic.twitter.com/7jZWvYdhgI

Natasha Bertrand, a White House and National Security reporter for CNN, said the Biden administration “does not speculate on the cause” of the damage to the Nord Stream pipeline system at NS1 and NS2.

“The United States stands ready to support the efforts of its European partners as it investigates,” Bertrand said.

It was reported by Kylie Atwood, another CNN reporter on national security, that US Secretary of State Antony Blinken said it would be “in no one’s interest” if the NS leaks proved to be the product of a attack or an act of sabotage.

Unfortunately, this is not true at all.

The sabotage of Nord Stream 1, the only active one for the transfer of gas from Russia to Germany, definitively interrupts and who knows for how long the energy supply to the European Union, already limited due to the EU sanctions against Moscow and the multiple maintenance work carried out by the management company 51% controlled by the Russian Gazprom.

This means that if in the coming weeks the German government wanted to change its gas supply strategy, as Hungary did by entering into contested new agreements with Gazprom itself, it would no longer have the possibility of doing so.

This, inevitably, will further increase the importance of LNG supplied to EU countries by the US via ships at a disproportionate cost compared to supplying energy via pipelines.

That is why at the end of the sabotage, on which the Scandinavian countries have opened an investigation like the UN that will investigate for international terrorism, the only nation to have any advantages will be that of Washington.

This is why the CIA warning appears very suspicious, given that in its history it has the alleged responsibility of very serious criminal attacks such as the sending of jihadists to unleash the Balkan War and the cover-up of the FBI warnings on the attacks of the September 11, 2001 in which it actually allowed one of the most serious massacres in the history of mankind. Before the pandemic: in which he obviously put, more than a hand, a decisive paw for the construction of SARS-Cov-2 as a bacteriological weapon. Read the WuhanGatese surveys if you don’t believe them …

THE FROST-RESISTANT DYNAMITE OF THE BALTIC SEA

«In general, to make dynamite, nitroglycerin, neutral or slightly alkaline, is mixed at a temperature of around 40 ° with other substances, in order to achieve homogeneity of the mass or gelatinization. The operation, initially carried out by hand, is now carried out with special kneading machines. The mass of the explosive is then mostly divided into cylindrical cartridges, with an average weight from 60 to 200 gr., By machines built in such a way as to avoid rubbing, shocks, heating. The cartridges are then wrapped in slightly waxed paper and stored in isolated warehouses protected by embankments, possibly kept at about 15 °, to avoid freezing or exudations of the nitroglycerin. Particularly frost-resistant dynamites are obtained by using dinitrotoluols together with nitroglycerin. Recently, the use of nitroglycol has also been extended ».

The Treccani Encyclopedia explains, highlighting the “simple” manufacture of this explosive which was invented by a very famous Swede.

«Around 1863 Alfredo Nobel set up two nitroglycerin factories in Sweden intended for use as a mine explosive. However, following some disasters that occurred, the manufacture was not only abandoned, but even prohibited by law. However, the Nobel Prize later found a way to make nitroglycerin less dangerous by mixing it with an inert absorbent substance: kieselgur or land of infusoria. Dynamite was thus discovered and the invention of A. Sobrero enhanced».

EUROPE’S CALIPHATE: THE JIHAD ARMED BY SAUDIS AND CIA