In The Transfer Agreement (The Haavara Agreement), Edwin Black’s compelling award-winning story of a negotiated arrangement in 1933 between Zionist organizations and the Nazis to transfer some 50,000 Jews, and $100 million of their assets to Jewish Palestine in exchange for stopping the worldwide Jewish-led boycott threatening to topple the Hitler regime in its first year, exposes historical truth. 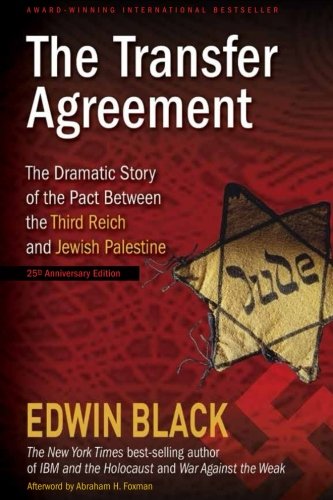 This truth threatens to destabilize modern Zionism’s stranglehold on the mainstream media propaganda that, in 2011, continues to suffocate U.S. Citizens and the world with “guilt” appeals and billions of US taxpayer “aid” dollars given each year to a state that neither has the best interest of the American people nor the best interests of its own indigenous populations that the Zionist so-called democracy claims to represent.

Join me as we follow the historical journey of Edwin Black as he travels into the truth that was the movement of German Jews into Palestine and their subsequent conquest of the indigenous Palestinian people.

On August 7, 1933, leaders of the Zionist movement concluded a controversial pact with the Third Reich which, in its various forms, transferred some 60,000 Jews and $100 million– almost $800 million in 1984 dollars– to Jewish Palestine. In return, Zionists would halt the worldwide Jewish-led anti-nazi boycott that threatened to topple the Hitler regime in its first year. Ultimately, the Transfer Agreement saved lives, rescued assets, and seeded the infrastructure of the Jewish State.

Fiery debates instantly ignited throughout the pre-War Jewish world as rumors of the pact leaked out. The acrimony was rekindled in 1984 with the original publication of The Transfer Agreement and has never stopped.

Understanding the painful process and the agonizing decisions taken by Jewish leadership requires a journey. This journey will not be a comfortable one with clear-cut concepts and landmarks. The facts, as they unfold, will challenge your sense of the period, break your heart, and try your ethics… just as it did for those in 1933 who struggled to identify the correct path through a Fascist minefield and away from the conflagration that awaited European Jewry.

To discover The Transfer Agreement, Edwin Black took that journey.

His journey began in 1978 when a small bank of misfits preaching nazism and waving swastikas decided to march through the predominantly Jewish Chicago suburb of Skokie. Suddenly an unimportant group of bigots provoked an important controversy. The outraged community was determined either to prevent the march or to confront the neo-nazis on the parade route. Many Skokie residents were Holocaust survivors and remembered well that only fifty years before, Hitler’s circle had also started as a small band of social misfits. The Jewish community would not ignore an attempt to reintroduce the nazi concept–no matter how feeble the source.

But establishment Jewish leaders counseled Jews to shutter their windows and pay no attention. And a Jewish attorney from the American Civil Liberties Union rose reluctantly to champion the Neo-Nazis’ right to freedom of expression–over the survivors’ right to be left alone. In covering the issue as a young journalist and reacting to the crisis as a Jew and the son of Holocaust survivors, he was confused by the response of Jewish leaders.

To prepare for a Chicago Reader interview with the Jewish ACLU attorney representing the neo-nazis, he spoke with Jewish scholar Rabbi Byron Sherwin. He told Edwin Black there were many enigmas about the Jewish response to nazism, one of which was a long-rumored arrangement between the Third Reich and the Zionist Organization involving the transfer of German Jewish assets to Palestine. He added that little was known about the arrangement if it indeed existed.

Edwin Black couldn’t believe what he had heard. The possibility of a Zionist-nazi arrangement for the sake of Israel was inconceivable for a person of his background.  His mother, as a girl, had been pushed by her mother through the vent of a boxcar on the way to the Treblinka death camp. She was shot by nazi soldiers and buried in a shallow mass grave.  His father had stepped out of line during a long march to a destiny with death. While hiding in the woods, he came upon a leg protruding from the snow. This was his mother.

Together, by night and by courage, these two Polish teenagers survived in the forest for two years. When the war was over, they cautiously emerged from the woods believing that nearly all Jews may have been exterminated–except them. The question for them was whether there was still any use being “Jewish.” And yet–believing themselves to be among the last of their people–they decided to live on, as Jews, and never forget.

Quickly, his parents learned that others had survived, although almost none from their families. They resettled in the United States.

Edwin Black was born in Chicago and raised in Jewish neighborhoods, and his parents tried never to speak of their experience. Like the other children of Holocaust survivors, his life was overshadowed by his family’s tragedy. And, like other Jews, he saw the State of Israel as the salvation and redemption of the remnant of the Jewish people.  He had spent time on a kibbutz and returned to Israel several times after that. For years, he considered emigrating to Israel. The very meaning of Israel was a deep motivation in his life.

Yet there were incongruities he could never understand. Everywhere he looked in Israel, he saw German equipment. The icons of nazi commerce– Mercedes, Grundig, Siemens, Krupp–were thriving in the Jewish State, even as the ban on Wagner’s music was strictly enforced. And so many families were German Jews who had come to Israel during the Hitler era. For a year, he filed Rabbi Sherwin’s rumor in a mental box of imponderables. He had said many times that the most important rule in approaching the Holocaust is that nothing makes sense. And yet he needed to make sense of it.  If he could, then perhaps there was a reason his mother and father had lived, while six million had died.

Working through the staff and resources of Spertus College of Judaica, he was able to obtain some rare Hebrew and German materials that documented in a skeletal form that the arrangement indeed existed. After a great deal of personal anguish, he made his decision.

When he told his parents, his mother threatened to disown him and my father threatened to personally strangle him if he dared lend any credence to the notion of nazi-Zionist cooperation. This was done against a background of rising anti-Semitic and anti-Israeli attempts to somehow link the nazi regime with Zionists.

When he later showed his parents a hundred-page summary of his proposed book, his mother cried and said, “now I understand what I could never understand. Write the book.”

His father, who fought in the war as a Zionist Betar partisan, also gave him his blessing with the simple words: “Go write the book.”

His agent said he thought there was only one editor with the stamina to take on this book. That man was Edward T. Chase, editor-in-chief of New York Times Books, a man with preeminent credentials in WWII and Holocaust books.

He spent the next several years traveling through Germany, Israel, England, and the United States, locating forgotten files in archives, scouring newspapers of the era, interviewing principals, and surveying government papers. Millions of microfilm frames of captured nazi documents had never been analyzed. Boxes of boycott papers had never been organized. Worse, he found that little had been written about Hitler’s first year–1933.

For months, the information confounded Edwin Black;  nothing made sense. There were so many contradictions; nazis promoting Jewish nationalism. American Jewish leaders refused even to criticize the Third Reich. Principal players who said one thing in public and did the opposite in private. Everything was upside down. And historians of the period told me they were equally confused about what had really occurred.

Finally Edwin Black was able to piece the information together and reconstruct events. 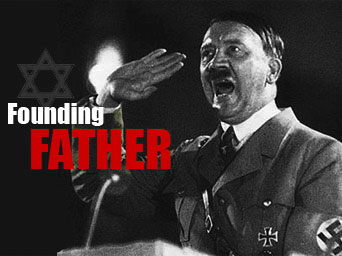 To do so, he had to clear his mind of preconceived notions and stare at the situation through the eyes of those who lived through it. And yet, after all the researching and reading, and writing, his intense inner attachment to the Zionist concept and Jewish nationalism and the State of Israel only deepened. That’s because he had finally made sense of it. And anyone who does will understand Zionism for what it is: a national movement, with the rights and wrongs, the ethics and expediencies, found in any other national movement.

The fact they were foiled by their own disunity merely puts them in the company of all mankind.

The Catholic Church, the Lutheran Church, and the Supreme Moslem Council all endorsed the Hitler regime. The United States, England, France, Italy, Russia, Argentina, Japan, Ireland, Poland, and dozens of other nations all signed friendship and trade treaties and knowingly contributed to German economic and military recovery. The international banking and commercial community–no less than the Zionists–saw Germany as indispensable to its salvation. The Zionists were indeed in the company of all mankind–with this exception: The Jews were the only ones with a gun to their heads.

Edwin Black’s belief in the Jewish people, in American Jewish organizations, in Zionism, and in the State of Israel and its founding mothers and fathers were never shaken. Those who sense outrage or anger in his words are hearing but the echo of their agony.