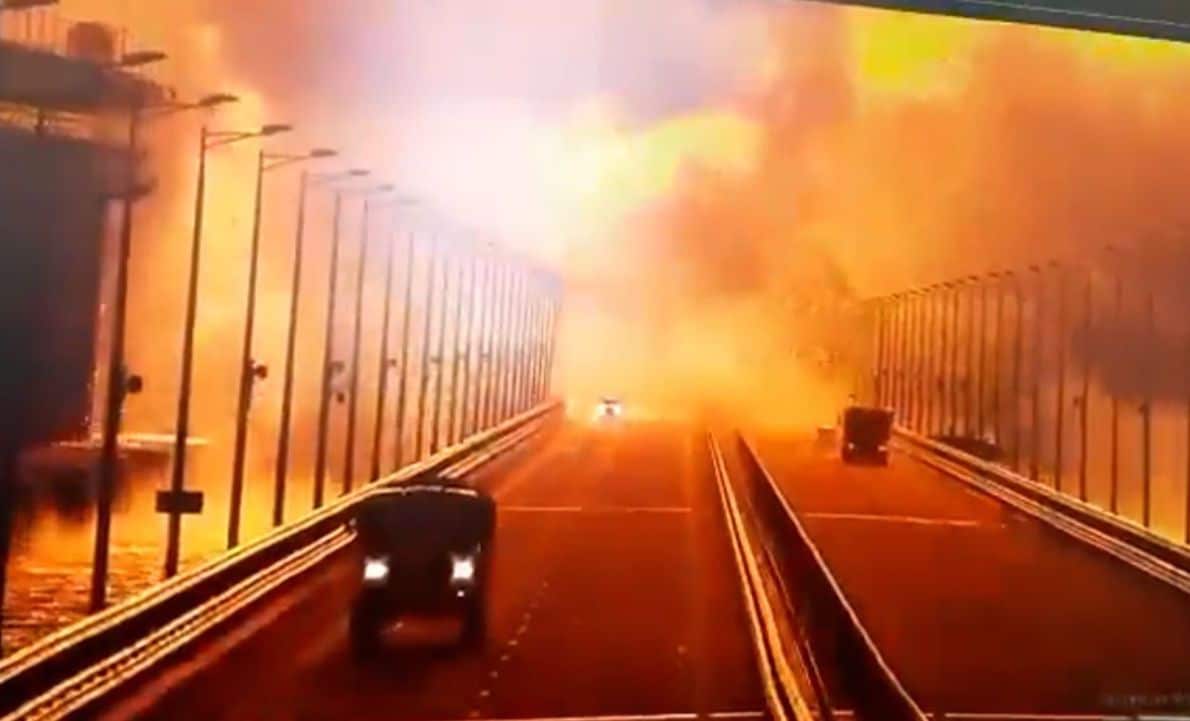 Russia Today and Sputnik News, a Kremlin-controlled network, support the thesis of a truck explosion, so the possibility that it was an attack for sabotage.

A truck has been blown up on the Crimean Bridge, the National Anti-Terrorist Committee has reported, according to Sputnik News.

“Today, at 6:07am, a truck was blown up on the motorway section of the Crimean Bridge from the Taman Peninsula, which caused seven fuel tanks of a train travelling to the Crimean peninsula to go up in flames. Two motorway sections of the bridge have partially collapsed. The arch over the land part of the bridge has not been damaged,” the report says. The cause of the explosion is now being investigated.

Russian President Vladimir Putin has instructed to create a government commission in connection with the emergency on the Crimean Bridge, Kremlin spokesman Dmitry Peskov said on Saturday.

This suspicious blast happened after the recent sabotage of Nord Stream gas pipeline and the terrible attack to Darya Dugina, daughter of Russian philosopher Alexander.

The Crimean Bridge on Fire

«Crimean head Sergey Aksenov said that the ferry crossing in Crimea is ready for launch and will start working from Saturday. He added that, according to what one can see, one motorway section of the Crimean bridge – from Kerch to Taman – is intact» reported Sputnik News.

The movement of ships in the Kerch Strait did not stop despite a fire on the Crimean Bridge, the Russian Federal Agency for Sea and Inland Water Transport (Rosmorrechflot) said.

Crimea rejoined Russia after nearly 97 percent of voters supported the move in the March 2014 referendum. After the reunification, Russia began building a railway bridge to connect the peninsula with the mainland. The Crimean bridge is the longest in Europe, as it makes up almost 12 miles.

According to Russia Today, a video from the scene that was posted on social media appears to show the fuel tank fire and the damage to the road.

Nikolay Lukashenko, the acting regional transport minister, told reporters that the authorities are considering launching a ferry service.The 19-kilometer (11.8 mile) bridge, which runs across the Kerch Strait and connects Crimea with mainland Russia, consists of a railway section and a vehicle section. It became fully operational in 2020.

“Air defense of the Russian Federation, are you sleeping?” the Navy of the Armed Forces of Ukraine said on Facebook, alongside a video showing a section of the bridge’s road that had been completely destroyed.

“Russian illegal construction is starting to collapse and catch fire. The reason is simple: if you build something explosive, sooner or later, it will explode. And this is just the beginning,” David Arakhamia, the head of Ukrainian president Volodymyr Zelensky’s party in parliament and a member of Kyiv’s negotiating team with Russia, said in a Telegram statement about the incident

In an interview in August, a senior Ukrainian military commander said the Kerch bridge was a legitimate target.

“This is a necessary measure in order to deprive them (Russia) of the opportunity to provide reserves and reinforce their troops from Russian territory,” Maj. Gen. Dmytro Marchenko said in an interview with RBC-Ukraine.

Meanwhile, a cargo train in Ilovaisk in the Russian-occupied Donetsk region was hit by a “powerful explosion” Saturday morning, according to the adviser to Mariupol Mayor Petro Andrushenko.

“Not only Crimea. Not only fuel tanks. There is also a cargo train in Ilovaisk. Locals report a rather powerful explosion and subsequent detonation at night. The occupiers now have big problems with supplies from both sides,” Andrushenko said.