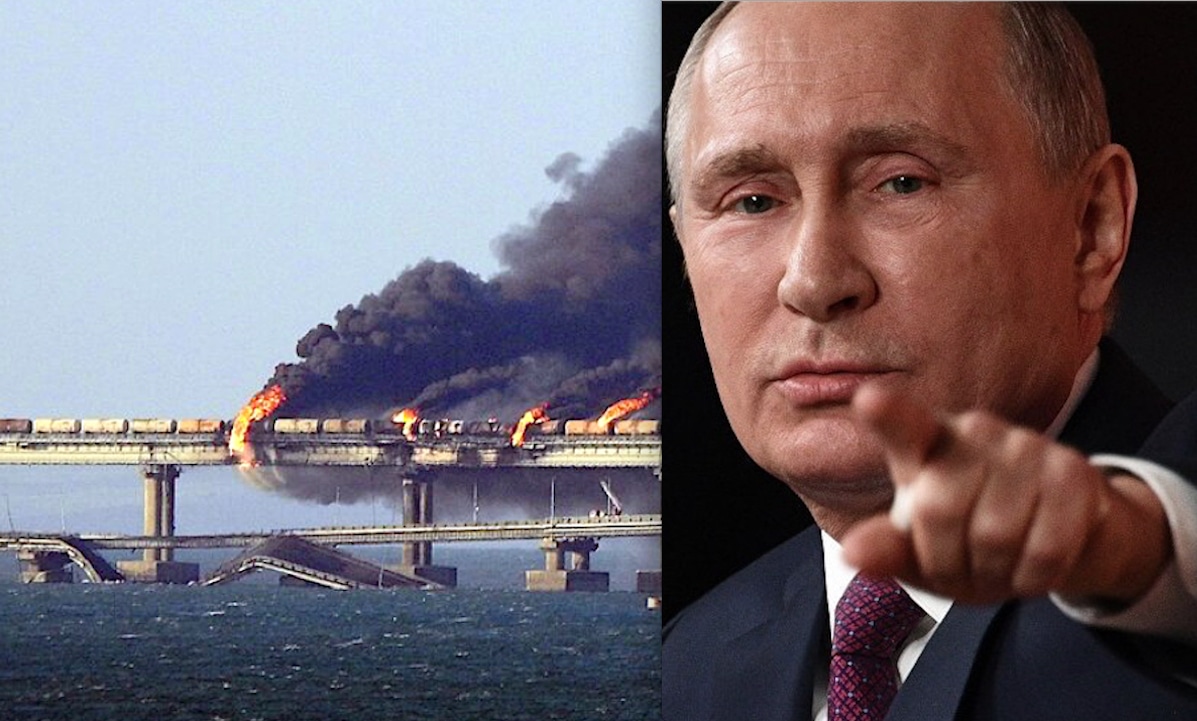 Two different sources, Putin and the New York Times, blame KIev’s intelligence for the bomb attack on the Crimean bridge.

The 19-km long bridge linking Crimea to Krasnodar was hit by a massive explosion on Saturday morning, killing three people, causing part of the road section to collapse into the sea and oil tankers on the adjacent rail section to catch fire. Ukrainian officials hinted at Kiev’s responsibility for the terrorist incident in a series of Twitter posts.

The attack on the Crimean Bridge was ordered, hatched, and carried out by Ukraine’s special services, Russian President Vladimir Putin has indicated.

“This was a terrorist attack aimed at destroying critical Russian civilian infrastructure,” Putin said, speaking at a meeting with Russian Investigative Committee head Alexander Bastrykin on Sunday evening. “The Ukrainian special services were the authors, perpetrators and customers,” Putin added.

But the same accuse coming up by American famous newspaper New York Times.

«A senior Ukrainian official corroborated Russian reports that Ukraine was behind the attack. The official, speaking on the condition of anonymity because of a government ban on discussing the blast, added that Ukraine’s intelligence services had orchestrated the explosion, using a bomb loaded onto a truck being driven across the bridge» wrote few hours ago the journalists Michael Schwirtz and Andrew E. Kramer.

“The perpetrator of the crime is the failed state of Ukraine. This is a terrorist act and sabotage committed by the criminal Kiev regime. There is no doubt, and there never was… Russia’s response to this crime can only be the direct destruction of terrorists,” Medvedev said in an interview with a Donbas journalist.
According to Sputnik News, the chief investigator informed Putin that the Ukrainian special services received assistance from Russian citizens and foreign nationals in preparing the attack.

THE ROUTE OF TRUCK-BOMB FROM BULGARIA TO KRASNODAR

“We are continuing our investigation into the goals and objectives of this bombing. It undoubtedly carries a terrorist character. This was an act of terrorism. All our data allow us to draw an unambiguous conclusion – this was a terrorist attack prepared by the Ukrainian special services. The purpose of this terror attack was to destroy a large piece of civilian infrastructure which carries great importance for Russia,” Bastrykin said, as reported by Ilya Tsukanov for Sputnik.

The Investigative Committee head also said that the Federal Security Service (FSB) had identified suspects in the blast. The attack on the bridge was aimed at Russia’s “critical infrastructure,” Bastrykin said, adding that it was “an act of terrorism.”

“We opened a case under the second part of Article 205 “Terrorism”, and this is confirmed by the data at the initial stage of the investigation. They interrogated a lot of eyewitnesses, started special expert studies, which have been mainly completed – this is an explosive, genetic, forensic examination. Relevant instructions were given to conduct operational-search activities to the agencies of the FSB, the Ministry of Internal Affairs of Russia,” he said.

Investigators have tasked Russia’s Interior Ministry and the FSB domestic intelligence agency to conduct investigative and search operations in connection with the crime.

Bastrykin said the route of the truck that was blown up on the bridge has been established, and includes Bulgaria, Georgia, Armenia, and the Russian regions of North Ossetia and Krasnodar.

Russia’s National Anti-Terrorism Committee reported Saturday that a section of the motorway on the Crimean Bridge was destroyed after a truck exploded at 6:07 am local time, with several fuel tanks on a train traveling along the nearby rail portion of the bridge catching fire. Two motorway sections suffered a partial or complete collapse, but the bridge’s arches appeared not to have been damaged.

Russian authorities announced a series of measures to repair damage and ensure stable transport ties between Crimea and Krasnodar Territory. Putin signed a decree Saturday night to step up security for transport crossing through the Kerch Strait, as well as electricity and energy infrastructure in the area.

Light vehicle and train traffic via the bridge resumed via the undamaged rail portion and the surviving roadway section of the bridge. However, buses and trucks were asked to use the emergency ferry service until an engineering assessment of the damage is completed.

Peskov did not specify whether the situation with the Crimean bridge would be discussed at the meeting. “We’ll let you know following the results [of the meeting],” he said.

Also in the Donbass, in the early hours of Saturday night, there was an attack on a train convoy. Meanwhile the Russian Ministry of Defense appointed General Sergey Surovikin, also known as General Armageddon, as new commander of all Military Special Operation in Ukraine

BELARUS ALARMED BY OTHER ATTACKS

And Belarus is alarmed by other attacks that are manifesting the terror strategy implemented by Kiev according to a logic well known to military intelligence of NATO and the Five Eyes.

Ukrainian forces have destroyed almost all bridges and mined the roads along the border with Belarus, Anatoly Lappo, chairman of the State Border Committee of Belarus, said on Sunday. Minsk has accused Kiev of planning imminent strikes on its territory.

“Today, almost all border bridges have been blown up, and automobile and railway border routes are completely mined,” Lappo told Belarusian TV, according to Russia’s Interfax news agency.

The blasting attack to Crimean Bridge happened after the terroristic sabotage of Nord Stream gas pipeline and the lethal attack to Darya Dugina, daughter of philosopher Aleksander: in this one the FSB Russian Secret Service identified two Ukrainians as material executors.