Home Investigations Too Many Secrets on Manmade SARS between Chinese Biolab & Daszak’s NGO... 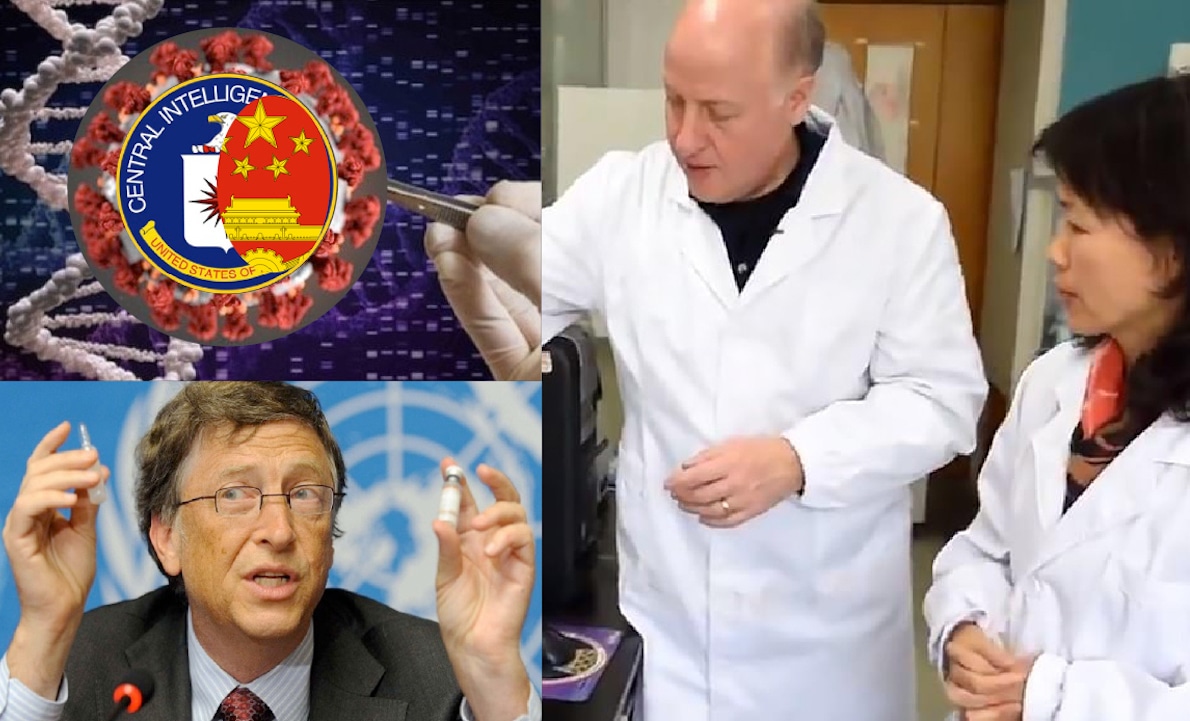 On the cover image Bill Gates, and Peter Daszak alongside Shi Zhengli in Wuhan Institute of Virology

Too many hidden secrets from China about the chimeric viruses developed by the Wuhan Institute of Virology. This is the reason why the American National Institute of Health (NIH) has not renewed funding for the projects of the New York NGO Eco Health Alliance, chaired by the scandal zoologist Peter Daszak but financed by the Bill & Melinda Gates Foundation which thus helped support the Chinese laboratory research with which the SARS-Cov-2 laboratory was built in a deal between Beijing and Washington.

While this decision, reported only by a site of American scholars by The Bulletin of the Atomics Scientists but not by the major mainstream media, is an indirect confirmation of the artificial construction of the pathogen of Covid-19, elaborated through a lethal combination of the SARS of 2003 with the ‘HIV, the AIDS virus, to build an enhanced germ for Dual Use purposes, that is a vaccine that is also a bacteriological weapon.

WUHAN-GATES – 52. Getting an HIV Vaccine: “May be the Real Goal behind SARS-Cov-2 Manmade”

On the other hand, it represents the puerile attempt of the USA to call itself out of its responsibilities despite being macroscopic and evident. Let’s make a very quick summary for the few who have not read at least one of the last 20 reports of the Wuhan-Gates cycle, it is not called that by chance.

The American doctor David Martin proved, thanks to the indelible traces of funding and patents, that even the SARS of 2003 would have been built in the laboratory trough to the coronavirus experiments conducted by Professor Ralph Baric at the University of North Carolina (UNA) since 2000, under the direction of Anthony Fauci, for decades director of the NIAID (National Institute for Allergies and Infectious Diseases), with the grants of the military agency DARPAof the US Pentagon and in collaboration with the Moderna American pharmaceutical company, the first to patent a messenger RNA gene serum against Covid 9 months before the pandemic.

A recent study has also revealed that 19 nucleotides of SARS-Cov-2 are incredibly identical to as many of a human laboratory gene built by the same Big Pharma of Cambridge as far back as 2016.

The meticulous research of Dr. Martin has confirmed what the late French virologist Luc Montagnier has repeatedly stated about a SARS-Cov-2 manmade in a deal between China and the USA.

His claims were also recently confirmed by an investigation by the Chemical and Bacteriological Defense Troops of the Russian Federation.

But in reality the first experiments on HIV infected SARS were developed as far back as 2004 by the Wuhan Institute of Virology thanks to funding from the Episars project of the European Commission chaired by Romano Prodi, future premier with the Democratic Party in perfect harmony with the administration. DEM Obama-Biden during which the development of the chimeric viruses of the SARS type took place in the UNA.

An important role in the research was played by the EcoHealthAlliance of New York chaired by Daszak, which ended up in the eye of the storm even in the mainstream media for not only having been a research contributor to Shi Zhengli, the director of the Center for Diseases. Emerging Infectives of the Wuhan Institute of Virology nicknamed “bat-woman” for her dangerous studies of the coronavirus of Chinese horseshoe bats, but also the one who led 27 scientists from The Lancet magazine to deny the artificial origin of SARS-Cov- 2 since February 2020.

Not only. Daszak was also the researcher who sparked the scandal about the task force sent by the WHO to China to discover the origin of the virus because the director of the World Health Organization, the Ethiopian former leader of a terrorist organization Tedros Adanon Ghebreyesus, a well-known Gates puppet who heavily finances the WHO as the Big Pharma of anti-Covid vaccines, appointed him within the group of scientists selected to investigate the nature of the Covid pathogen -19 despite these macroscopic conflicts of interest.

This is why NIH’s blocking of funding to the NGO EHA is of considerable importance. But above all, it confirms that there was something rotten in China, then politically piloted by the Shanghai Gang of Jiang Zemin, the Chinese president known as the executioner of Tiananmen, who allowed his son and his ministers to strengthen the Wuhan Institute of Virology after an agreement on biological weapons with US President Bill Clinton.

But above all there is so much rottenness in the US that institutions loyal to the new president Joseph Biden, sponsored in the campaign by Pfizer and the first illustrious pharmaceutical representative of the Big Pharma of vaccines, are trying to hide under the carpet.

Too many secrets built in about twenty years of a pandemic planned by Fauci and Gates, as claimed by attorney Robert F-Kennedy jr, and they are starting to smell even in the button rooms.

«It had to come at some point, but Dr. Anthony Fauci, the highest paid employee in government today, is finally leaving his post as head of the National Institute of Allergy and Infectious Diseases, a post that enabled him to become the face of lockdowns and vaccine mandates that have left enormous economic, cultural and health destruction in their wake».

It wrote the website The Defender managed by the Children’s Health Defense association of RFK jr.

Fauci to Step Down in December — Will He Be Held Accountable for Role in Disastrous COVID Policies?

He has never acknowledged the downside to the policies he pushed as an advisor to both Trump and Biden and still refuses even fully to admit his role. Nor has he been forthcoming about his role in the funding of gain-of-function research in Wuhan.

«Has Fauci’s presence become a liability to the Biden administration and the Democrats generally? Perhaps but there is also the issue of book royalties that await him once leaving his post with the government» The Defender added.

The National Institute of Health (NIH) is partially terminating a grant to a nonprofit that worked extensively with the Wuhan Institute of Virology on bat coronavirus research. In letters posted by Republicans on the House Oversight Committee this month, an NIH official said EcoHealth Alliance had not been able to hand over lab notebooks and other records from its Wuhan partner that relate to controversial experiments involving modified bat viruses, despite multiple requests.

In an Aug. 19 letter to Kentucky Rep James Comer, the top Republican member of the US House Oversight Committee, Michael Lauer, the deputy director of extramural research at NIH, said the agency had informed EcoHealth that it was terminating the sub-award to the Wuhan Institute of Virology “for failure to meet award terms and conditions requiring provision of records to NIH upon request.”

The termination notice comes after the NIH chided EcoHealth last fall for not immediately notifying the agency after its experiments showed modified coronaviruses replicated at a faster rate in experimental mice than an unmodified virus. The agency then asked for lab notebooks and other files pertaining to the experiments, and EcoHealth reported that it would relay the request to the Wuhan Institute of Virology. According to the new NIH letters, the Wuhan institute never delivered.

“NIH has requested on two occasions that [EcoHealth] provide NIH the laboratory notebooks and original electronic files from the research conducted at [the Wuhan Institute of Virology]. To date, [the institute] has not provided these records,” Lauer told Comer. NIH verified to the Bulletin that the letters were authentic.

WUHAN-GATES – 27. Scandal in SARS-Cov-2 Inquiry! Inside WHO Task-Force a Gates’ Partner who funded in Wuhan & US Chimera Viruses Tests

A letter from NIH to EcoHealth staff, also dated Aug. 19, said the NIH is taking action because EcoHealth did not include terms and conditions on its sub-award to the Wuhan Institute of Virology, including a requirement that EcoHealth Alliance be allowed access to the institute’s records and financial statements. “NIH has determined that [Wuhan Institute of Virology’s] refusal to provide the requested records, and [EcoHealth’s] failure to include the required terms in [the] subaward agreement represent material failures to comply with the terms of award,” the letter said.

Between June 2017 and May 2019, scientists working on EcoHealth’s grant tested genetically engineered coronaviruseswith the backbone of one virus and the spike proteins—which bind to host cells—of another on mice that expressed human cell receptors. In one case, the NIH reported last fall,  one of the chimeric viruses caused mice to become “sicker.” EcoHealth reports show that in the infection experiments, conducted in years four and five of the grant, chimeric viruses replicated faster in mice lungs and killed a higher percentage of mice than the unmodified virus. Last fall, the NIH said that EcoHealth was supposed to report the increased viral growth to the agency “immediately” to assess whether further biosafety measures were necessary.

The NIH said the Wuhan institute’s experiments under the EcoHealth grant involved viruses that were too genetically distant to have evolved to become SARS-CoV-2, the virus that causes COVID-19. But some critics of so-called gain-of-function experimentation—in which pathogens are enhanced in way that makes them, say, more transmissible—have said last fall’s revelations point to risky research projects being undertaken at the laboratory in Wuhan, the city where the first reported cases of COVID were reported.

Research published recently in Science points to the pandemic having sprung from a seafood market in the city where animals that could have harbored coronavirus infections were kept. That research has served as a new focus of controversy, as researchers argue over whether it does or does not greatly reduce (or even eliminate) the possibility that the COVID-19 pandemic started with the leak of a virus from a laboratory in Wuhan.

EcoHealth has not responded to a request for comment about NIH’s decision to partially terminate its grant.

According to the new NIH letters, EcoHealth can work with National Institute of Allergy and Infectious Diseases to revise the grants without involving the Wuhan Institute of Virology. If that is not possible, the NIH will ask that the grant be “bilaterally terminated.”

Should a reworked grant be possible, the agency will add new terms to it, including increased NIH oversight over EcoHealth for at least three years and increased reporting requirements for the nonprofit. The nonprofit will also be required to visit its sub-awardees every six months to ensure compliance with the grant.

Originally published by The Bulletin of the Atomics Scientists

Matt Field is editor, biosecurity at the Bulletin of the Atomic Scientists. Before joining the Bulletin, he covered the White House, Congress, and presidential campaigns as a news producer for Japanese public television. He has also reported for print outlets in the Midwest and on the East Coast. He holds a master’s degree in journalism from Northwestern University.