Among the German wounded in the Ypres Salient in Belgium on October 14, 1918, is Corporal Adolf Hitler, temporarily blinded by a British gas shell and evacuated to a German military hospital at Pasewalk, in Pomerania.

The young Hitler was drafted for Austrian military service but turned down due to lack of fitness; while living in Munich at the start of the First World War in the summer of 1914, he asked for and received special permission to enlist as a German soldier.

As a member of the 16th Bavarian Reserve Infantry Regiment, Hitler traveled to France in October 1914. He saw heavy action during the First Battle of Ypres, earning the Iron Cross that December for dragging a wounded comrade to safety.

Over the course of the next two years, Hitler took part in some of the fiercest struggles of the war, including the Battle of Neuve Chapelle, the Second Battle of Ypres and the Battle of the Somme.

On October 7, 1916, near Bapaume, France, Hitler was wounded in the leg by a shell blast. Sent to convalesce near Berlin, he returned to his old unit by February 1917. According to a comrade, Hans Mend, Hitler was given to discourse on the dismal state of morale and dedication to the cause on the home front in Germany:

“He sat in the corner of our mess holding his head between his hands in deep contemplation. Suddenly he would leap up, and running about excitedly, say that in spite of our big guns victory would be denied us, for the invisible foes of the German people were a greater danger than the biggest cannon of the enemy.” 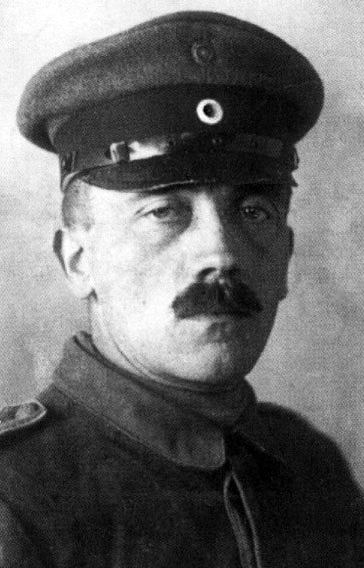 Hitler earned more citations for bravery in the next year, including an Iron Cross 1st Class for “personal bravery and general merit” in August 1918 for single-handedly capturing a group of French soldiers hiding in a shell hole during the final German offensive on the Western Front. The injury in October, however, put an end to Hitler’s service in World War I. He learned of the German surrender while recovering at Pasewalk.

Infuriated and frustrated by the news—”I staggered and stumbled back to my ward and buried my aching head between the blankets and pillow”—Hitler felt he and his fellow soldiers had been betrayed by the German people.

In 1941, Hitler as fuhrer would reveal the degree to which his career and its terrible legacy had been shaped by the First World War, writing that “I brought back home with me my experiences at the front; out of them I built my National Socialist community.”