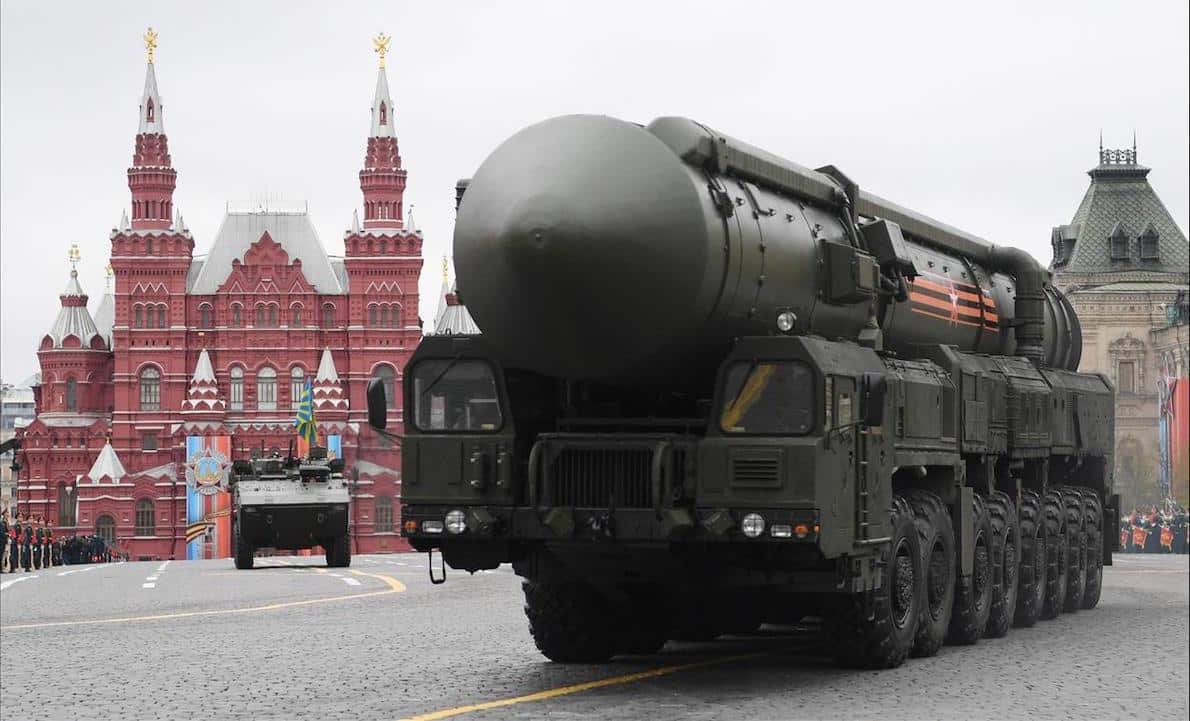 A few months ago the superb President of Ukraine Volodymyr Zelensky spread the word that Russian President Vladimir Putin had run out of missiles. Between Monday and Tuesday, the retaliation of Russian aviation with hundreds of missiles on the capital Kiev and other Ukrainian cities, in response to the explosive attack on the Kerch bridge for who has blamed the Kiev intelligence, has severely denied him.

But for weeks now there has been talk of the nuclear nightmare due to a decree signed two years ago by Putin which provides for the use of tactical atomic weapons also in response to attacks with conventional weapons on Russian territory, already hit several times by rockets from Kiev in the border areas. The issue has become even more alarming after the annexation to the Russian Federation of the Ukrainian regions of Donetsk, Lugansk, Kherson, and Zaporizhzhia as, logically, the same justification to use nuclear weapons could apply to these territories as well.

According to Martin Armstrong of Statista, nine countries are thought to now have close to 13,000 nuclear warheads.

The United States and Russia are at the top of the list, as compiled by the Federation of American Scientists (FAS), with a combined arsenal of nearly 11,000 weapons. “Instead of planning for nuclear disarmament, the nuclear-armed states appear to plan to retain large arsenals for the indefinite future,” the FAS said in late 2021. “All continue to modernize their remaining nuclear forces… and all appear committed to retaining nuclear weapons for the indefinite future.”

A nuclear war “cannot be won and must never be fought,” the United States, Russia, China, the UK, and France unanimously agreed in January, in a rare instance of agreement on a matter of international security. A senior U.S. State Department official at the time described the vow, the outcome of months of negotiations, as “an acknowledgment that it is something that we want to avoid.”

US NUCLEAR WEAPONS IN EUROPE

Nuclear weapons owned by the United States have been deployed in Europe since the mid-1950s when President Dwight D. Eisenhower authorized their storage at allied North Atlantic Treaty Organization (NATO) bases on the continent for use against the Soviet Union. Though NATO officially declares itself a “nuclear alliance,” it does not own any nuclear weapons. Instead, a small number of bombs are reportedly kept under U.S. Air Force guard at six airbases in five European countries, ready to be delivered by respective national fighter planes.

Today, under NATO’s nuclear sharing program, the bombs complement the alliance’s collective security deterrent against threats, principally Russia. Alongside NATO member the United Kingdom’s arsenal, U.S. nuclear weapons in Europe are consistent with Article V of the North Atlantic Treaty. Fellow member France, who re-joined the alliance in 2009, does not commit its own nuclear arsenal to the alliance’s extended deterrent. 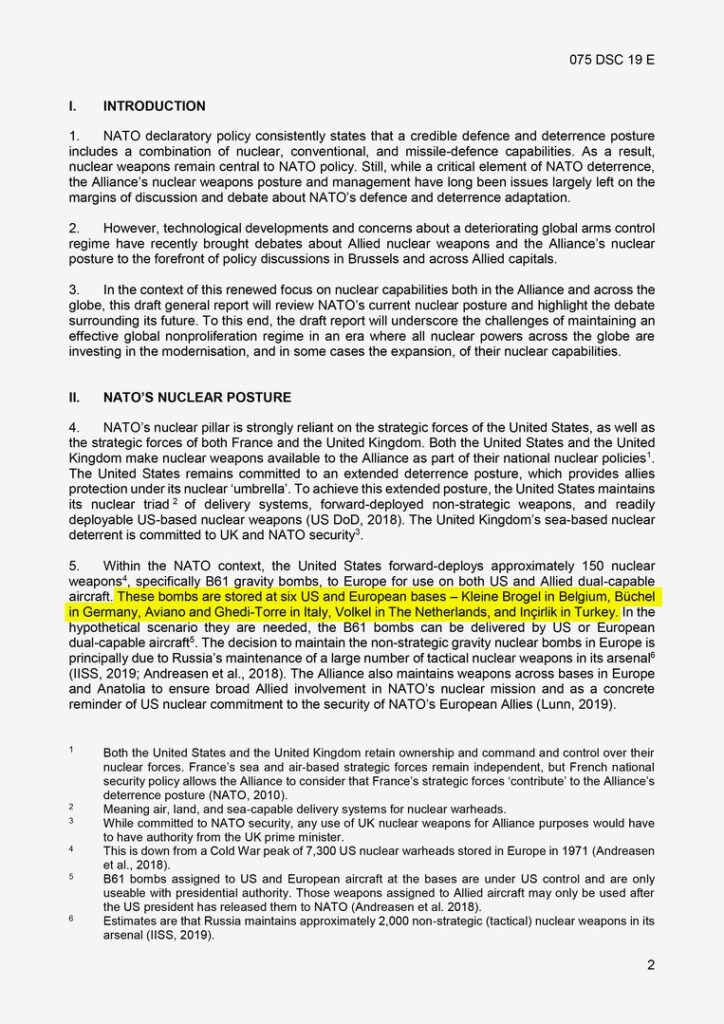 All 30 members of the alliance excluding France are also a part of the Nuclear Planning Group, which discusses policy issues. The North Atlantic Council remains NATO’s ultimate authority, and member states retain control over their own nuclear forces Center for Arms Control and Non-Proliferation wrote.

The United States and its NATO allies do not disclose exact figures for its European-deployed stockpiles.

In 2021, it is estimated that there are 100 U.S.-owned nuclear weapons stored in five NATO member states across six bases: Kleine Brogel in Belgium, Büchel Air Base in Germany, Aviano and Ghedi Air Bases in Italy, Volkel Air Base in the Netherlands, and Incirlik in Turkey according to the Center for Arms Control and Non-Proliferation that quoted Federation of American Scientists. But the Nato paper shows that they are almost 150.

The weapons are not armed or deployed on aircraft; they are instead kept in WS3 underground vaults in national airbases, and the Permissive Action Link (PAL) codes used to arm them remain in American hands. To be used, the bombs would be loaded onto dual-capable NATO-designated fighters. Each country is in the process of modernizing its nuclear-capable fighters to either the F-35A, the F-18 Super Hornet, or the Eurofighter Typhoon.

The total number of nuclear weapons based in Europe reached an all-time peak of 7,300 during the height of Cold War tensions in 1971. The 98% reduction to today’s stockpile reflects the end of Cold War hostilities as well as shifting American defense priorities. The weapons are an important symbol of the U.S.’ longstanding security commitments to Europe, but questions have been raised about the desire of European countries to continue hosting WMDs.

U.S. nuclear weapons in Europe consist entirely of B61-3 and -4 gravity bombs deployed by dual-capable aircraft. Now undergoing modernization under the NNSA’s B61-12 Life Extension Plan, updated warheads are scheduled for deployment by 2024 alongside delivery vehicle modernization programs of host nations. This B61-12 variant will include a new tail kit to improve both efficiency and accuracy. It will also allow variable yield capability, with a yield ranging from 0.3 KT to 170 KT, and allow for both strategic and tactical use.

THE OTHER NUCLEAR COUNTRIES IN EUROPE

The U.S., U.K., and France protect other NATO allies under their “nuclear umbrellas” in line with the NATO commitment that an attack on any one ally will be viewed as an attack on the entire alliance.

ATOMIC WARHEADS IN THE WORLD

Both Russia and the U.S. have thousands of nuclear weapons, most of which are five or more times more powerful than the atomic bombs that leveled Hiroshima and Nagasaki in 1945. These include about 1,600 weapons on standby on each side that are capable of hitting targets across the globe» according to an article by Laura Hood for The Conversation (Academic rigor, journalistic flair).

Those numbers are near the limits permitted under the 2011 New Strategic Arms Reduction Treaty, often called “New START,” which is the only currently active nuclear arms control treaty between Russia and the U.S. Their arsenals include intercontinental ballistic missiles, better known as ICBMs, and submarine-launched ballistic missiles, as well as missiles launched from specialized aircraft. Many of those missiles can be equipped with multiple nuclear warheads that can independently hit different locations.

To ensure that countries follow the limits on warheads and missiles, the treaty includes methods for both sides to monitor and verify compliance. By 2018, both Russia and the U.S. had met their obligations under the New START, and in early 2021 the treaty was extended for five more years. 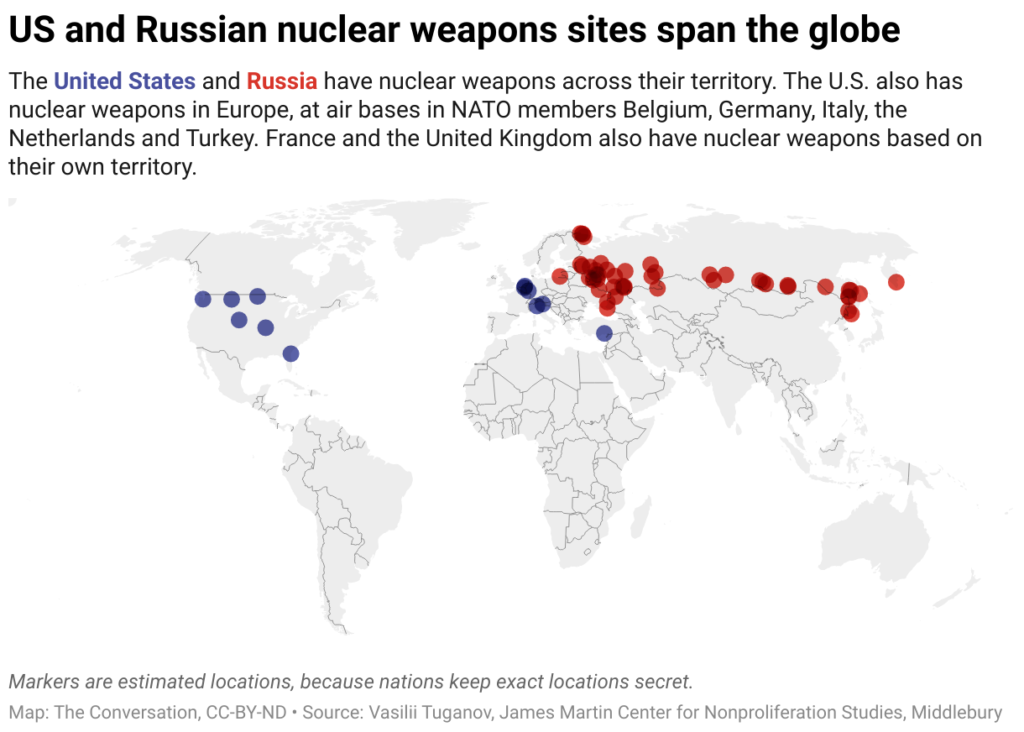 Both nations’ nuclear arsenals also include hundreds of shorter-range nuclear weapons, which are not covered by any treaty. Currently, Russia has nearly 2,000 of those, about 10 times as many as the United States, according to the most widely cited nongovernmental estimates Laura Hood wrote.

China’s nuclear arsenal is currently similar in size to the U.K. and French arsenals. But it’s growing rapidly, and some U.S. officials fear China is seeking parity with the United States. China, France, and the U.K. are not subject to any arms control treaties. 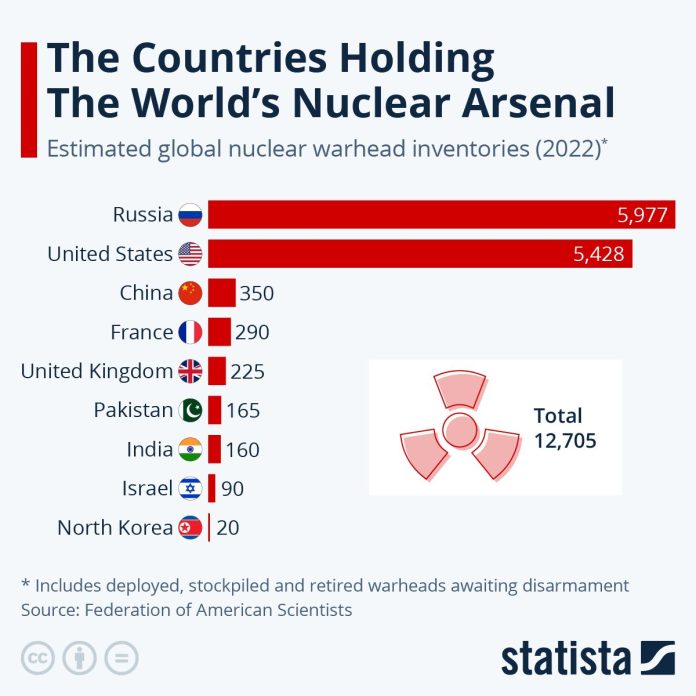 India, Pakistan, and Israel have dozens of nuclear weapons each. None of them has signed the Treaty on the Non-Proliferation of Nuclear Weapons, in which signatories agree to limit the ownership of nuclear weapons to the five permanent members of the U.N. Security Council, each of which possessed nuclear weapons before it was signed.

THE RUSSIAN SARMAT ICBM IS READY

An intercontinental ballistic missile (ICBM) is a ballistic missile with a range greater than 5,500 kilometers (3,400 mi), primarily designed for nuclear weapons delivery (delivering one or more thermonuclear warheads). Conventional, chemical and biological weapons can also be delivered with varying effectiveness, but have never been deployed on ICBMs.

Most modern designs support multiple independently targetable reentry vehicles (MIRVs), allowing a single missile to carry several warheads, each of which can strike a different target. Russia, the United States, China, France, India, the United Kingdom, and North Korea are the only countries known to have operational ICBMs.

“The Sarmat is equipped with the most advanced maneuvering warheads,” Degtyar said. The missile is unique in terms of its unsurpassed speed, record-breaking range, highest accuracy, and complete invulnerability while penetrating anti-missile defense systems.

In June, he told TASS that the silo for the Sarmat was a complex engineering structure that guaranteed the missile’s security against strikes with conventional high-precision weapons and nuclear ones.

Degtyar described the Sarmat as the “crowning achievement” in rocket technology the Makeyev center accomplished in cooperation with a cluster of subordinate enterprises. This newest missile system will reliably ensure the security of Russia from external threats for 40-50 years to come, Degtyar believes.

“In today’s adverse geopolitical conditions, it is our impregnable shield, the main factor of nuclear deterrence and a guarantee of peace,” he added. Degtyar recalled that the Sarmat would replace the Voyevoda system, which was created back in the Soviet era.

The new missile, he stressed, is not an analog, but a new generation ICBM with colossal performance characteristics. “That is why it has already been dubbed an ‘engineering miracle’ and the ‘crowning achievement in rocket technology,” Degtyar said.

The Sarmat ICBM was developed at the JSC Makeyev Design Bureau and manufactured at the Krasmash plant (both are affiliates of Roscosmos). According to experts, the RS-28 Sarmat ICBM is capable of delivering a MIRV of up to 10 tonnes to any point on the globe. Its first launch was from the Plesetsk cosmodrome in the Arkhangelsk region on April 20. The test was successful. The design characteristics were confirmed at all stages of the rocket’s flight path.