Lord Cornwallis was one of the most capable British generals of the American Revolution. In 1776, he drove General George Washington’s Patriots forces out of New Jersey, and in 1780 he won a stunning victory over General Horatio Gates’ Patriot army at Camden, South Carolina. Cornwallis’ subsequent invasion of North Carolina was less successful, however, and in April 1781 he led his weary and battered troops toward the Virginia coast, where he could maintain seaborne lines of communication with the large British army of General Henry Clinton in New York City.

After conducting a series of raids against towns and plantations in Virginia, Cornwallis settled in the tidewater town of Yorktown in August. The British immediately began fortifying the town and the adjacent promontory of Gloucester Point across the York River.

General George Washington instructed the Marquis de Lafayette, who was in Virginia with an American army of around 5,000 men, to block Cornwallis’ escape from Yorktown by land. In the meantime, Washington’s 2,500 troops in New York were joined by a French army of 4,000 men under the Count de Rochambeau. 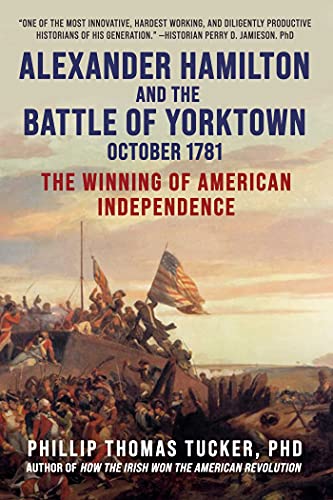 Washington and Rochambeau made plans to attack Cornwallis with the assistance of a large French fleet under the Count de Grasse, and on August 21 they crossed the Hudson River to march south to Yorktown. Covering 200 miles in 15 days, the allied force reached the head of Chesapeake Bay in early September.

Meanwhile, a British fleet under Admiral Thomas Graves failed to break French naval superiority at the Battle of Virginia Capes on September 5, denying Cornwallis his expected reinforcements. Beginning September 14, de Grasse transported Washington and Rochambeau’s men down the Chesapeake to Virginia, where they joined Lafayette and completed the encirclement of Yorktown on September 28.

De Grasse landed another 3,000 French troops carried by his fleet. During the first two weeks of October, the 14,000 Franco-American troops gradually overcame the fortified British positions with the aid of de Grasse’s warships. A large British fleet carrying 7,000 men set out to rescue Cornwallis, but it was too late.

On October 19, General Cornwallis surrendered 7,087 officers and men, 900 seamen, 144 cannons, 15 galleys, a frigate, and 30 transport ships. Pleading illness, he did not attend the surrender ceremony, but his second-in-command, General Charles O’Hara, carried Cornwallis’ sword to the American and French commanders. As the British and Hessian troops marched out to surrender, the British bands played the song “The World Turned Upside Down.”

Although the war persisted on the high seas and in other theaters, the Patriot victory at Yorktown effectively ended fighting in the American colonies.

Peace negotiations began in 1782, and on September 3, 1783, the Treaty of Paris was signed, formally recognizing the United States as a free and independent nation after eight years of war.

READ MORE: How Alexander Hamilton’s Men Surprised the Enemy at the Battle of Yorktown