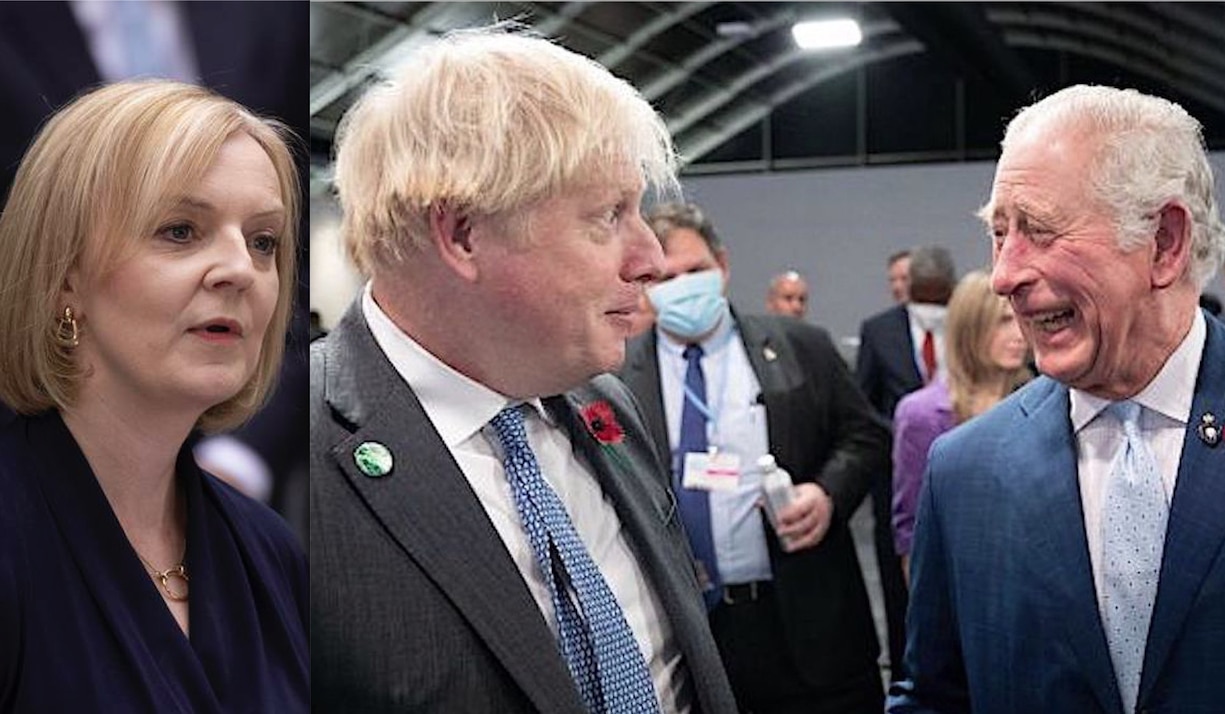 Liz Truss resigned today and broke the record of having been in office as UK premier for just 45 days, the shortest term of UK prime ministers.

From the lightning-fast political parable of the British premier we can grasp a rather immoral teaching that explains well the functioning of the New World Order.

It is not enough to be in favor of NATO, the Weapons Lobby and their insane pro-Nazi hitman Volodymyr Zelenskyarmed and financed by the US and the EU to trigger a suicidal Third World War in Europe, evoked by the General of the Defense Staff British.

To be acceptable to the Masonic-Zionist lobbies in the United Kingdom where the financial, pharmaceutical and military systems is indirectly controlled by the Rothschilds for centuries, one must necessarily be prone and servile towards the Great Reset planned by Klaus Schwab, president of the World Economic Forum funded by Bill Gates, and the former Prince of England, now King Charles III.

Truss’ 45 days in Downing Street served the Conservatives more extremist than the Tories to teach a lesson to anyone who wants to return to being prime minister in the UK.

Among these is the hypothesis of a return of Boris Johnson, scorched by scandals on the tabloids but always well regarded in the House of Lords where the Conservative Party holds a solid relative majority of 256 seats.

If so, as credited by the Times, his previous resignation would have been a strategic “political catharsis” aimed at removing the image of him from the blunders of the classic elephant in a crystal shop; of which, however, he knows every secret about the Big Pharma triad of vaccines that is profiting from the pandemic caused by a SARS-Cov-2 created in the laboratory by the US-China-EU, with all probability even with British complicity.

The cause of the premier failure can be read in three numbers: 22% of poor people in England, 40% increase of cost in basic necessities and the 150 billion pounds foreseen by Truss’s economic plan to block household gas bills, for at least two years to the maximum amount of 2,500 pounds per year, while with the increases in progress it was expected to rise to 3,549.

“I want an economy made of low taxes, high wages and high growth. That mission remains”, assured Liz Truss during the press conference convened in Downing Street after the torpedoing of the Minister of Finance, Kwasi Kwarteng, and the appointment to his Jeremy Hunt’s place.

She said just a week ago announcing the renunciation of the plan to eliminate a corporate tax that ensures revenue of around 18 billion pounds but the will to remain premier. However, the resignations of some ministers and the Anglo-Saxon media driven by the Big Economy have made her change her mind.

One Hundred Employees of the Royal House to Be Fired. First Action of King Charles III smelling of Great Reset

If the poor do not get poorer and the middle class does not reach the threshold of hunger, how does start the Great Reset that provides for an economic technocracy aimed at creating new slaves at the service of multinationals, ready to work for a loaf rather than for a decent salary?

Political experts tell what they want. Interpretations of social facts are often much simpler than those of financial analysts.

MULTIPLE ALARMS FOR THE ENERGY CRISIS IN ENGLAND

As the Mayor of London, Sadiq Aman Khan warned, referring to the risk that in the winter there will be no basic needs in British supermarkets.

His alarm echoes that launched by National Grid, the national grid operator, after the government stopped the public information campaign to encourage citizens to reduce consumption.

The UK, in his opinion, risks facing continuous blackouts in the winter if it does not import enough energy from Europe.

As we read in the newspaper ‘The Times’, millions of families could have their electricity cut for three hours a day if there is not enough gas to burn in the power plants, forcing the country to activate rationing plans.

National Grid, which has come up with a program that calls for balances to households with smart meters more than £ 10 a day to reduce their energy consumption at peak times, warned that gas imports from Europe could be at risk from of the Russian invasion of Ukraine, a factor that could jeopardize the energy security of the whole of the United Kingdom.

The British government is not asking citizens to use less energy. This was stated by British climate minister Graham Stuart speaking to the television station “Sky News”, commenting on the announcement of the network operator.

Today that government no longer exists.

THE RESIGNATIONS AND THE MAXI-ANNUITY OF TRUSS

British Prime Minister Liz Truss announced, along with her resignation, that the vote for her succession will be held “between now and next week”. The government “has achieved results on energy bills”, as well as “outlining a vision for a low-tax, high-growth economy that would exploit the freedoms of Brexit.”

But “I recognize that, given the situation, I cannot complete the mandate for which I was elected by the Conservative party”. With these words, British Prime Minister Liz Truss announced her resignation stating that she took office “at a time of great economic and international instability”.

You are the words of a victim of a system, of course … But perhaps also as an accomplice! For her 7 weeks as premier, in fact, Liz Truss will receive a pharaonic annuity remuneration.

The annual allowance that Truss will pocket will be 115 thousand pounds: more or less 130 thousand euros, every year, for the rest of her life. To be precise, they will be 132,140 euros.

Any Western politician would have exposed himself to a media pillory for such a “prebend”!