It was Shrove Tuesday, 1945 in the magnificent German art city of Dresden, which was packed with helpless Christian refugees fleeing the Red Army of the Stalinist USSR. Dresden’s native Lutheran and Catholic children, dressed in their festive Saxon folk costumes, were aboard a train taking them home after Mardi Gras parties at different points in the far-flung city. 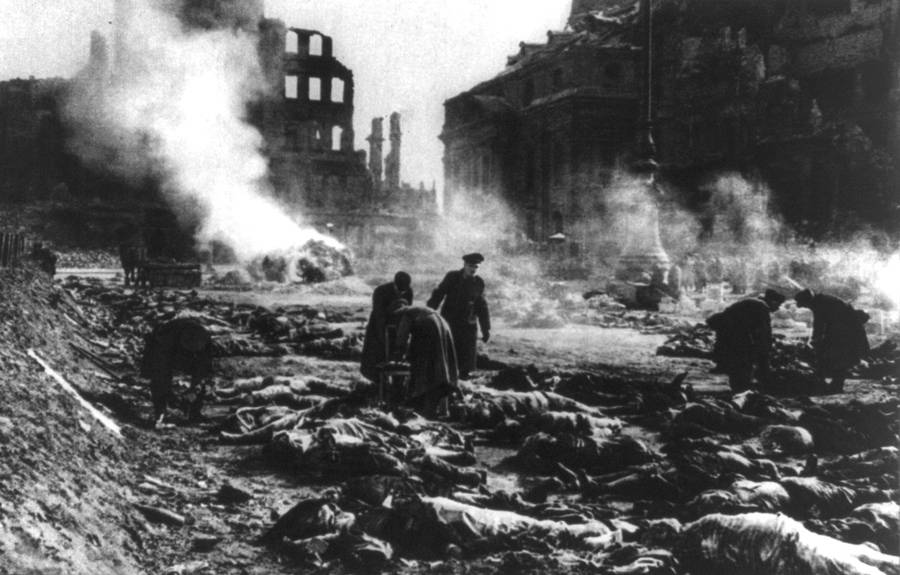 Still merry from the night’s festivities, they cavorted on the train prior to Ash Wednesday, February 14, and the solemnities that would be observed even in wartime, in memory of the passion and death of Jesus. In the sky, Allied fighter planes caught sight of the civilian train and opened fire on the children inside, whose blood was soon pouring out of the wreckage. 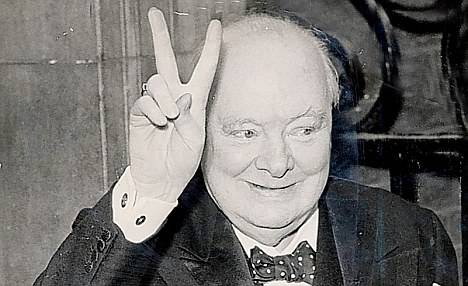 He is the real war criminal

This carnage registers almost not at all in the American mind. The holocaust in Dresden, lasting two days and killing at least 100,000 people, like the atomic holocaust in Hiroshima and Nagasaki, usually merits not much more than a few sentences or a single paragraph in the back pages of metropolitan newspapers, unlike “Yom HaShoah (יום השואה) Holocaust Remembrance Day,” in April, which is observed with countless civic, educational and media events, hosannahs, apologies, and genuflections, from the Vatican to the White House. The barely remembered German and Japanese victims of Allied war crimes were of the wrong race and religion. 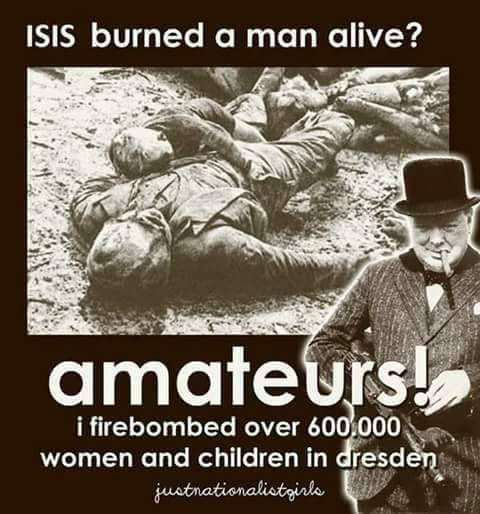 In the spring of 1945, after prosecuting the bombing holocaust against every major German city, and with the end of the Second World War in sight in Europe, Winston Churchill began to consider his reputation in the post-war period, when the 500,000 German innocents he ordered incinerated could come back to haunt him and stain his prestige. On March 28, 1945, he issued a deceitful, back-stabbing memo blaming the mass incineration on his own Bomber Command and by insinuation, upon its commander Arthur Harris, whose force would be denied a post-war campaign medal, and Harris a peerage.

Harris and Bomber Command had been only following Winston Churchill’s explicit orders, yet Churchill attempted to shift responsibility onto the corps of airmen who had suffered among the highest casualties of any branch of the British military.

Churchill, like many others, endeavored to blame Germany for being the first to saturate civilians with terror bombs —at Guernica in Spain on behalf of Franco’s forces, and in Rotterdam, during the war with Holland. In both cases, Churchill stated that thousands had been killed. Even one death is regrettable of course, but less than 100 people were killed in Guernica according to historian David Irving, and less than a thousand in Rotterdam when the Luftwaffe accidentally struck a margarine factory and the flammable liquid burned houses nearby.

Churchill had said “thousands” died in Guernica, and that 30,000 perished in Rotterdam, which is more than what Deborah Lipstadt says died in the two-day inferno in Dresden (the absurdly low figure of 25,000 is now the officially fixed count to which the “news media” conform without deviation).

The British Prime Minister obtained his pretext toward the end of August 1940, when a lone, wayward German bomber “lost its way flying up the Thames” river. It had orders to attack an oil refinery but instead dropped its bombs on London’s East End. No one was killed thankfully, but Churchill was elated.

He had the excuse he needed to massively retaliate against Berlin, knowing Hitler would respond in kind, and that the British peace movement would vanish in the smoke and flames of the “Battle of Britain” and the “Blitz.” Churchill ordered a hundred bombers to attack Berlin. Royal Air Force (RAF) commanders warned him that the Luftwaffe would do the same to London.

At this juncture we pause to contemplate the bloody treason that was at the heart of Churchill’s soul: he wanted as many of his own English civilians in London to die as possible, so he could point to their deaths as the justification for a total war against Germany, and he succeeded in his objective.

To this day the war crime, the leaders of Britain and the United States perpetrated in Dresden is justified on the basis of the tired fable that “Germany did it first to Rotterdam and Guernica,” and “Look at the terror the Germans visited upon London.” Nothing that occurred in Guernica, Rotterdam, or for that matter London, begins to even approach the scale of the holocaust that the firebombs of the air forces of Churchill and Franklin Roosevelt inflicted on Dresden.

On September 4, 1940, Hitler gave a speech in which he stated that if the “mad drunkard” Churchill continued to attack Berlin, the Germans were not going to stand by and take it. It was Neanderthal thinking on the führer’s part: you club me over the head and I will club you. Hitler was almost always outfoxed by the clever machinations of the masonic treachery at the heart of Britain’s ruling class.

No matter what Churchill ordered, Hitler should have limited his air campaign to British military sites and munitions factories (the Luftwaffe never bothered to attack the factories that built Britain’s Lancaster bombers).

On September 6 the English people heard the ominous drone of a fleet of Luftwaffe bombers flying up the Thames. Some 3,000 Londoners subsequently died. Now Churchill had what he wanted. You won’t find these facts in the multi-volume history he wrote, or in the pages of the work of the conformist historians. To learn the truth one must read and study the revisionists, particularly the demonized David Irving, the preeminent military historian of World War II in the Atlantic theatre.

Irving’s nemesis, Deborah Lipstadt meanwhile, has taken it upon herself to deny the holocaust casualty figure of 100,000 for Dresden, but God helps any one of us who would have the temerity to doubt the Six Million casualty figure of Holocaustianity, or even to apply the word “holocaust” to what happened in Dresden.

I challenge any reader to collect the legacy media’s descriptions of the bombing of Dresden from the 1990s onward and count how many terms it a holocaust.

The extent to which we are imprisoned in an Orwellian dystopia of our own making is revealed when we consider the fact that it is regarded as highly insensitive or indeed “anti-Semitic” to violate the self-appointed Newspeak holocaust trademark appropriated by the Holy People, and apply it to the German cities that were incinerated, or to Hiroshima and Nagasaki, even though those war crimes were genuine holocausts by dictionary definition: “Destruction or slaughter on a mass scale, especially caused by fire. Origin: Greek holokauston, from holos ‘whole’ and kaustos ‘burned.”

Even in the liturgy of Holocaustianity it is not decreed that most Judaic victims of the Nazis perished by fire. A half-million German civilians and three-quarters of a million Japanese civilians (including the victims of the fire-bombing of Toyko), were indeed burned to death, yet it is a thought crime to say so. Tell me we are not all cowards for allowing the truth itself to be forbidden. We live in Talmudic times.

This writer is sometimes accused, as a researcher in the field of the Babylonian Talmud, of seeing the Talmud where it is not. It is not so much the Talmudic texts themselves that we observe in our society, but the results of their influence. The single most remarkable dimension of Talmudic halacha is its narcissistic exceptionalism, born of the self-worship it inculcates. 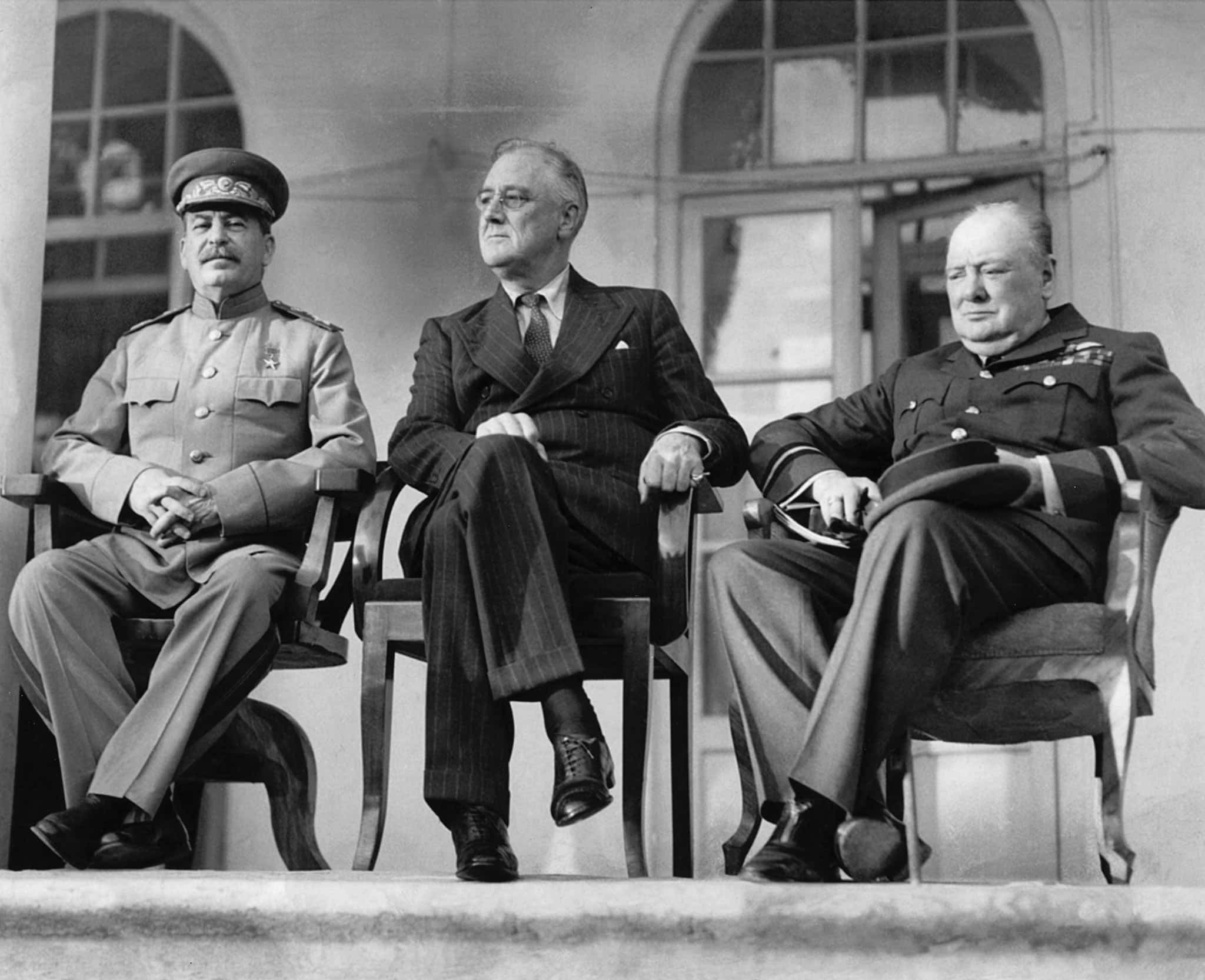 Prof. Lipstadt, who has made a career out of stigmatizing anyone who doubts any aspect of the “Holocaust” narrative, as a diabolic “Holocaust denier,” is free to deny, without negative consequences, the holocaust in Dresden, because of her exceptional status as one of the Holy People. She may do as she likes with history, in ways that the rest of us may not. For that reason alone we cannot respect the religion of Holocaustianity.

It is not history. It is a product of Talmudic megalomania. Few of us tolerate fanatical egoism from Catholics, Protestants, or Muslims. The very idea raises our secular indignation and “Separation of Church (or Mosque) and State!” is our cry, in the face of it. But to shout “Separation of Synagogue and State!” in nations where Holocaustianity is the last truly believed state religion in the otherwise agnostic West, would be unthinkable for anyone who valued their reputation, employment, personal safety, or in Europe, freedom from incarceration.

Beyond the “Jew and gentile” entanglement is the fratricide: Churchill and his top military circle were not Judaic, yet they set afire the medieval cities of their German cousins, who only two generations before had comprised the royal blood within the House of the German-speaking Queen Victoria.

A thousand years of national and religious wars in Europe had not managed to wreak the destruction that Mr. Churchill and U.S. President Franklin Roosevelt directed against the cultural treasure houses of western civilization, in cities like Dresden. They tossed a match into Dresden as casually as a drooling meth addict would torch an apartment building for revenge on the landlord who had evicted him. 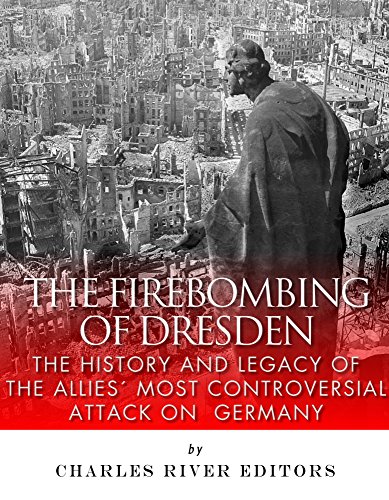 Yet “conservative Christian” American university professors and administrators in institutions of higher learning such as Michigan’s esteemed Hillsdale College, which is the recipient of millions of dollars in donations from “Conservatives” seeking to preserve western civilization, have hallowed Churchill into a paragon of decency, courage and western leadership. This view of this mass murdering vandal is such a defect of vision as to be fatal spiritually, culturally, and politically on a national scale.

If the powers that be decided, for example, that Russia needed to be fire-bombed, given sufficient pretext our “Conservatives” would do it all over again in the name of “civilization.” The blood of the innocent in Moscow and St. Petersburg would signify no more to the Hillsdale College type of crusaders than the charred bodies of the civilians in the apocalyptic wreckage of Dresden.

American civilization in 2018 is not worthy of the name. We have the illusion of a civilization, which we cherish for our own aggrandizement and nostalgia. “Conservative” America has made a common cause with the Talmudic mentality, as did Antonin Scalia, another of its plaster saints.

At the start of Lent 2018, seventy-three years after the Allies’ mass murder in Dresden, we inhabit the money changer’s house, where Christ on the Cross is sold not just for a buck, but for a bucket of Talmudic vindication.

Sourced From russia-insider.com.  Russia-Insider is a website created by a U.S. Expat living in Russia.  Unlike so many mainstream media sites in Russia, this one does NOT appear to be funded by the Russian Government.  See About Russia-Insider.com