Anyone who has read Alice Walker’s The Color Purple knows that it is not a pleasant book to read. It is filled with violence and child sexual abuse and rape. “Harpo come up the steps from the car. My wife beat up, my woman rape, he say. I ought to go back out there with guns, maybe set fire to the place, burn the crackers up.”[1]

The Color Purple was made into a movie by the same name. It was directed by none other than Steven Spielberg. Spielberg was obviously more than willing to take the role as director because The Color Purple is essentially an attack on the black family and Logos of history. We all know that Spielberg is known to distort the facts of history, as in the case of his movie Amistad.

We must also keep in mind that the Khazarian Mafia worked very hard to turn blacks into complete revolutionaries. This was truly the case with Frederick Douglas and Lorraine Hansberry. In fact, Lorraine Hansberry (A Raisin in the Sun), John Wideman (Brothers and Keepers), and Alice Walker all married Jews.[2]

Hansberry became a thorough revolutionary because she embraced the subversive spirit which has dominated the Khazarian Mafia for centuries. As E. Michael Jones rightly puts it, “the price the Negro has to pay for marriage (both literal and figurative) with the Jews is 1) loss of faith in God and 2) moral corruption.”[3]

By the time A Raisin in the Sun got written down, Hansberry had already lost her faith in God, saying things like,

“God hasn’t got a thing to do with it….God is just one idea I don’t accept…I get tired of Him getting credit for all the things the human race achieves through its own stubborn effort. There simply is no God—there is only man and it is he who makes miracles.”[4]

The last sentence is really troublesome because it implies that Hansberry was carrying an intellectual burden which literally destroyed her position. In fact, if one follows this premise to its logical conclusion, then philosophical worthlessness or deadness is the end result.

If there is “only man” and if “it is he who makes miracles,” by what logical inference can Hansberry say that genocide or slavery is wrong? In fact, “miracles” like slavery were largely made by men. In fact, it was the Khazarian Mafia which largely brought slavery to America in the nineteenth century.[5]

If there is no ultimate transcendent moral virtue or value, who is Hansberry to tell us that might does not make right? Hansberry’s argument again is philosophically terrible and logically indefensible.

Hansberry declared at the end of her life, “Do I remain a revolutionary? Intellectually—without a doubt. But am I prepared to give my body to the struggle or even my comforts? This is what I puzzle about.”[6]

Hansberry was indeed morally confused and intellectually lost. Her ideological principles ultimately lead to moral relativism, which she ought to have known is logically unacceptable and intellectually impermissible. In fact, if Hansberry is right, then the sexual abuse which Alice Walker describes in The Color Purple is morally acceptable, and there is not a damn thing that Hansberry or Walker can do about it. 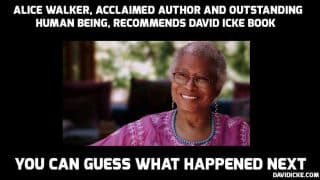 In any event, Alice Walker was fine when her writing was essentially serving the interest of the very people who worked tirelessly to turn blacks into revolutionaries. She got great accolades. In fact, The Color Purple won the 1983 Pulitzer Prize for Fiction and the National Book Award for Fiction.

But Walker got herself into trouble recently when she barely mentioned that she was reading David Icke’s And the Truth Shall Set You Free. Walker said: “In Icke’s books there is the whole of existence, on this planet and several others, to think about. A curious person’s dream come true.”[7]

Well, Walker was obviously stepping into a politically forbidden zone which is filled with explosives. I have never read any of Icke’s books. And no serious scholar or writer will appeal to the so-called The Protocols Of The Learned Elders Of Zion to make a scholarly or serious point. Scholars of all stripes have enough documents to construct serious arguments against the Khazarian Mafia and all their offshoots.

The central issue here is that Jewish organizations want to tell us all that Walker should never have mentioned Icke’s name because he is a vicious anti-Semite.[8] Walker got into deeper trouble when she published a poem on her blog entitled, “It is Our (Frightful) Duty to Study the Talmud,” in which we read:

“Are Goyim (us) meant to be slaves of Jews, and not only

That, but to enjoy it?

Are three year old (and a day) girls eligible for marriage and intercourse?

Must even the best of the Goyim (us, again) be killed?

Pause a moment and think what this could mean

Or already has meant

In our own lifetime.”

Well, the Jewish Daily Forward needs to confront the Talmud itself, because it does have unflattering things about the Goyim.[9] And if Jewish organizations still think that Walker is anti-Semitic, then why haven’t they stopped rabbis from saying evil things about the Goyim? Don’t they remember Rabbi Ovadiah Yosef? Here is what the late Rabbi said:

“Goyim were born only to serve us. Without that, they have no place in the world; only to serve the People of Israel. Why are gentiles needed? They will work, they will plow, they will reap. We will sit like an effendi and eat.

“With gentiles, it will be like any person: They need to die, but God will give them longevity. Why? Imagine that one’s donkey would die, they’d lose their money. This is his servant. That’s why he gets a long life, to work well for this Jew.”[10]

This has been a consistent pattern since the founding of Israel in 1948. The fact is that Benjamin Netanyahu and other Israeli officials (both past and present) have said similar things about the Palestinians. “In our neighborhood,” said King Bibi, “we need to protect ourselves from wild beasts.” If an Israeli soldier is convicted of manslaughter, says Netanyahu, he should be released immediately.

Long before Netanyahu came on the political scene, Prime Minister Yitzhak Shamir compared the Palestinians to “grasshoppers.”[11] Former IDF Chief of Staff Raphael Eitan declared way back in the 1980s:

So isn’t it time for Jewish organizations to honestly and forthrightly deal with these issues before they start accusing people of being anti-Semites? The ADL announced:

Cosmologist and science writer Chanda Prescod-Weinstein,[14] who identifies herself as “queer/agender”[15] and who is also half-Jewish and half-black, whined:

“I’m also essentially hostile to ‘but she was only promoting an anti-semitic work and didn’t write it herself’ bit because if a white dude was promoting anti-Black shit, I would be shredding him and hopefully you would be too. Also the poem was antisemitic, so.

“I’m more concerned about the fact that Walker doesn’t seem to have folks around her who are willing to call her in about this than about whether the NYT dug into it. I do think the NYT should not have passed her recommendation along. But where are her people?”[16]

Walker, who is now 74 years old, didn’t seem to back down. She again declared of Icke: “I do believe he is brave enough to ask the questions others fear to ask, and to speak his own understanding of the truth wherever it might lead.”[17]

Walker obviously feels that there are certain issues that cannot frankly be discussed in the media or public. In her poem, “It Is Our (Frightful) Duty,” Walker declares that

Israel should give back

The land it took

From a poorly defended

People in a war that lasted

I have witnessed Palestine

Under Israeli rule. It is demonic

To the core. But where to look

For so much evil? Where

To find the teachings that influence

And sanction such limitless cruel behavior?

Walker fully endorsed Miko Peled’s book, The General’s Son: Journey of an Israeli in Palestine. We interviewed Peled last January. Peled’s father fought in the 1948 war and served as a general in the war of 1967.

In short, it is ridiculous to say that Walker is an anti-Semite. But she is certainly sensing that there is more to the Khazarian Mafia than meets the eye and ear.