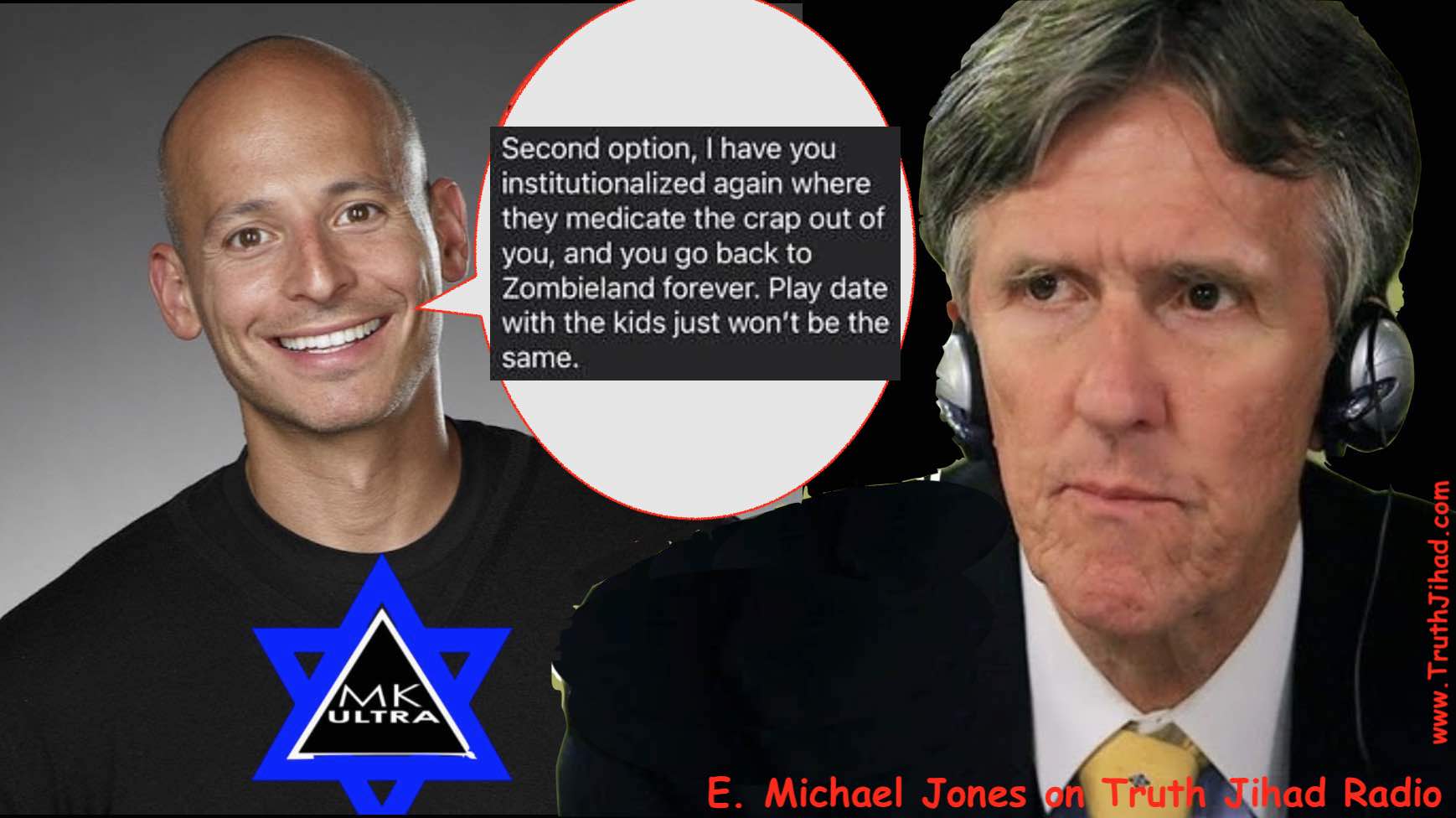 In a new Truth Jihad Radio interview, Dr. E. Michael Jones, editor of Culture Wars magazine, suggests that the otherwise inexplicable media lynching of Kyrie Irving was designed to distract attention from Kanye West’s Jewish-Zionist “personal trainer,” a certain Harley Pasternak, who issued horrific and obviously illegal threats to Kyrie but has not been prosecuted.

Below is a transcript of the final minutes of the interview.

E. Michael Jones: No, I didn’t. And I’ve said it a lot more times than Kanye has, actually. (laughter) I do have a theory about what happened here. Now, if you focus on Kyrie — we pronounce it Keerie-ay. We don’t say “Kyrie” eleison in mass. But anyway, if you focus on Kyrie, what he did seems completely insignificant. I mean, he tweeted a recommendation for a movie, okay?

Kevin Barrett: He didn’t even recommend it. He just had a link in the tweet that just basically means, hey, this is interesting. It doesn’t even say whether he likes it or dislikes it.

E. Michael Jones: Right. So why is it suddenly World War Three at the ADL? What’s going on here? First of all: Jonathan (Greenblatt), hold on. Take a deep breath. Take a step back. Count to ten. You just wrecked the best revolutionary operation in America. It was called the black-Jewish Alliance. It’s been in existence for 100 years. The NAACP was created by Jews to keep blacks on the plantation. And you were successful. The most successful resurrection of the black-Jewish alliance was Black Lives Matter. Everybody thought it had died in 1967. Now it’s back with a vengeance. And Jonathan, you just wrecked it! Why did you do that? Why did the ADL shoot itself in the foot? This guy named Liel Liebovitz just wrote an article saying the ADL has to go. It’s a Jew saying this. So (Jonathan Greenblatt) why did you do this? I think the answer is: because they needed something immediately to cover up the really damaging revelations that came out in the Kanye West scandal.

Kevin Barrett: And what were those?

E. Michael Jones: The fact that he had a personal trainer by the name of Harley Pasternak… Okay, so wait a minute. He’s your “personal trainer” and then he tweets — Kanye published the tweet — if you don’t do what I say, I’m going to have you institutionalized. You will you be shot up with drugs and you will never see your children again, or something like that.

Kevin Barrett: Yeah, that was a pretty nasty threat. I mean, I’ve heard of “you’ll never work in this town again.” I’ll bet Mel Gibson heard that a few times. But “we’re going to take your kids away and institutionalize you…”

Our investigation into the threats and actions made by @kanyewest's trainer, Harley Pasternak. pic.twitter.com/uaelNEzqlw

E. Michael Jones: Whoa, whoa. This is really serious. And it’s not the first time this has happened. Google Marilyn Monroe’s Jewish psychiatrist back in the fifties. Back then you weren’t called a personal trainer. You were called a psychiatrist when you had to take control of people’s lives. But the situation was similar because that guy Greenson shot Marilyn Monroe full of drugs and probably killed her. And now here’s this guy, Pasternak, who’s got connections with Canadian psychological warfare operations. And he tells this guy on camera that, “yeah, I have access to really powerful drugs.” Well, wait a minute. This is getting really serious. And all these A-listers there are basically under the control of this Jewish personal trainer who will threaten that if you get out of line, he’ll shoot you up with drugs, have you institutionalized, and take away your children!

Kevin Barrett: I understand that Sirhan Sirhan’s Jewish personal trainer said “if you keep going to these pro-Palestinian demonstrations, I’m going to make sure you’re locked up for the rest of your life.” I’m just joking, semi-joking, here. But I do think Sirhan Sirhan probably did actually have a Jewish personal trainer who was skilled in hypnotherapy. But that’s another topic for a different radio show. Yeah, I think you’re right, Mike. By putting that out there, you would think that the whole world would take Kanye’s side. And I think a lot of the world has.

E. Michael Jones: But the blacks have these token guys like Shaquille O’Neal, Charles Barkley, and Kareem Abdul-Jabbar, all of these guys on the plantation, who attack Kanye as if to say, “no, there’s no such thing as Jewish control.”

Kevin Barrett: What’s wrong with Kareem Abdul-Jabbar? I used to really like him when I was a kid and he was winning championships for the Milwaukee Bucks. He was a feisty Muslim troublemaker back then. What happened to that guy? Did they lobotomize him?

Kevin Barrett: Kareem is still probably close to seven feet tall, but he’s lost a lot of intellectual and moral stature. He’s becoming an embarrassment to the American Muslim community.

E. Michael Jones: So they basically divided the the black community. And the point of Lial Leibovitz’s article is that the people who are going to pay the price here are the little Jews. And it’s going to be places like Brooklyn where you have this intense confrontation between blacks and Jews on the street level. And they’re going to be attacked thanks to Mr. Greenblatt and his organization. Leibovitz is saying that Greenblatt came from the Democratic Party and basically made the ADL a Democratic organization. And it doesn’t care for ordinary Jews. Okay. I agree with that. But the other side of the coin is that basically the Jews took over the Democratic Party. So now you have Merrick Garland: Does anyone seriously think he applies the laws in some type of equal fashion? He’s like the Cheka. This is lawfare. You’ve got this weaponization of the law by all of these Jewish prosecutors who are taking Soros money.

Kevin Barrett: Isn’t it like every member of Biden’s cabinet is either Jewish or married to a Jew?

E. Michael Jones: Yeah. They say they have so many Jews they could have a minyan if it were a synagogue. Obviously the ADL now represents the Democratic Party. I’m sure Norman Podhoretz and the Commentary crowd, the neoconservatives, are upset about this. But … They blew up the whole black-Jewish alliance, which is one of the crucial features of the Democratic Party. Complete recklessness. I mean, did they panic? It’s more plausible that they panicked because people were talking about Kanye too much and they needed to distract from it by talking about this black Hebrew Israelite stuff, which is apparently what Kyrie believes.