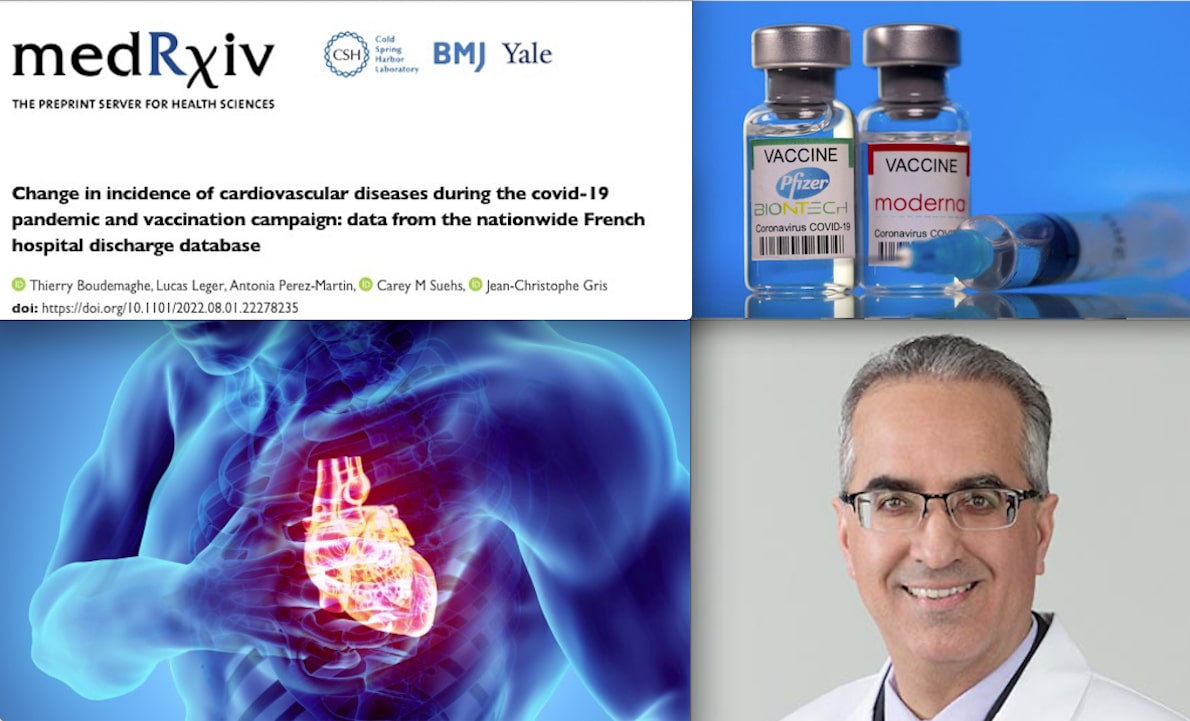 On the cover image, the very recent study by French doctors and the Californian cardiologist Sanjay Verma who elaborated an analysis of multiple alarming researches on myocarditis conducted all over the world

These are the results of a research just published in the specialized journal MedRxiv (partner of the British Medical Journal) by a group of French doctors from the Center Hospitalier Universitaire de Nimes and Montpellier University Hospitals (Thierry Boudemaghe, Lucas Leger, Antonia Perez-Martin, Carey M Suehs, Jean-Christophe Gris). This study was supported by internal funding from Nimes University Hospital (the sponsor of the study).

The article is still awaiting revision as it was only published on Monday 7 November but based on a statistical analysis of numbers it can be considered absolutely reliable.

As explained in the research summary the French doctors have conducted «Design Nationwide population-based cohort study. Setting French hospital discharge database between January 1 and October 30 in 2019, 2020 and 2021. Participants New patients hospitalized for vascular disease in Metropolitan France. A patient was considered as incident for a morbidity if not present in the database in the previous two years with the morbidity as the primary reason for admission. Main outcome measures Standardized hospitalization incidence difference and relative risk of hospitalization for a series of targeted vascular diseases from January 1 to October 31 for 2021 versus 2019».

The aim of the research was to monitor the impact of the SARS-Cov-2 virus emergency in health facilities but confirmed the alarm already raised by other research on myocarditis in young people and on autoimmune pulmonary embolisms predicted by Chinese universities in the distant October 2020, even before messenger RNA gene sera were put on the market, in an alarming study ignored by the entire international scientific community but duly published as a media preview by Gospa News.

«The covid-19 pandemic induced a severe disruption in hospital activity. Cardiovascular illnesses represent a major health burden in industrialised countries and are second in terms of hospital bed occupancy in France. Considering the resources mobilized and the public health issue involved, it is necessary to study the impact of the pandemic on their incidences. Objective To monitor changes in the incidence of cardiovascular diseases during years 2020 and 2021 compared to 2019» write the professors of the University Hospital of Nimes.

Their conclusions almost take for granted the correlation between anti-Covid vaccines and cardiac and pulmonary pathologies and urges that attempted medical history of patients at risk repeatedly advocated by many Italian doctors in the request for “specialist medical prescriptions” for the administration of experimental pharmacological biotechnologies but refused by the Italian Medicines Agency which, two years after the start of the inoculations, then sanctioned the need for a specialist visit only for the administration of the fifth dose (or second booster) in people suffering from immune diseases.

«The deficit in care for patients with acute atherothrombotic manifestations in 2021 and 2020 shows a failure by the French healthcare system to rectify the deficiencies of 2020. The risk excess for pulmonary embolism cannot be entirely explained by covid-19 or by vaccine-induced immune thrombotic thrombocytopenia. This warrants investigating the risk/efficacy ratio of a temporary thromboprophylaxis in individuals at risk before vaccine».

Among the signatories there is also Dr. Carey Suehs who had to report a conflict of interest for “grants and personal compensation from Astra Zeneca, grants from GSK, not related to the work in progress”. But despite this he shared the study in which the 28% increase in myocarditis is revealed among young people in self-evident and implicit correlation to vaccines, as predicted by many Italian doctors including the Italian surgeon Andrea Stramezzi and the American neurosurgeon Russell L. Blaylock.

THE MYOCARDITIS ALARM IN THE ARTICLE OF AN AMERICAN CARDIOLOGIST

A rich and disturbing article was published on the topic by the Californian cardiologist Sanjay Verma, FACC (Fellow, American College of Cardiology) on The Defender website managed by the Children’s Health Association of the lawyer Robert F. Kennedy jr.

It summarizes all the recently published research on myocarditis alarm among young people following the administration of RNA (Pfizer or Moderna) or messenger DNA (AstraZeneca or Janssen) gene sera. And all the dangerous elements highlighted in the previous Gospa News investigations that we have inserted aftermath in the doctor’s text are set out. The articles is readable in the full version on Gospa News International.

Here are the most significant parts of his introduction:

The disingenuous perfunctory refrains of “safe and effective,” “rare side effects” and “generally mild” are presented by public health officials as unquestionable truisms about COVID-19 vaccines, requiring no scientific data to justify them.

In the CDC’s intermediate-term (minimum 90 days) follow-up of myocarditis reports in VAERS published Sept. 21 in The Lancet, the CDC reports, “To our knowledge, no deaths occurred during follow-up among the patients eligible for the survey.”

Myocarditis and Death After COVID Vaccines: Is the Risk Greater Than Public Health Officials Claim?

However, in its own formal analysis of VAERS myocarditis reports published in The Lancet last month, the CDC reported that 50% still had persistent symptoms at median follow-up of 143 days. Additionally, about a third of patients still had activity restrictions at the time of follow-up.

There are several other published reports of myocarditis deaths after COVID-19 vaccination.

The concluding sentence of the article by the American cardiologist is emblematic: «Mandated preventable harm is an affront to medical ethics and tantamount to crimes against humanity, no matter how “rare” the CDC repeatedly insists are the severe and fatal side effects».

His enlightening scientific writing joins the studies that have pointed out multiple highly dangerous elements of the new messenger RNA biotechnology.

The American physician did it through the analysis of multiple researches published in the UK, Israel and Japan and the alarm raised by Florida State Surgeon General Dr. Joseph Ladapo who «now recommends against COVID-19 mRNA vaccines for males 18-38 years old. This updated recommendation was based upon an analysis through self-controlled case series, an established research method for evaluating vaccine safety».

CDC Pushed for COVID-19 Boosters Without Clinical Trials: Disturbing Emails: “Pfizer Recommends It and I Trust in their Guidance”

To the risks of myocarditis for young people, well illustrated by Dr. Verma in the paragraphs that we report below, have to be added the dangers of damage to the immune system with greater cancer risks from repeated boosters, the alteration of the DNA now proven by dozens of research, the pathologies neurological and neurocerebral, including those related to the development of mad cow prions, blood clots in the cardiovascular system caused by the toxic spike protein that remains for up to 6 months in the blood, and finally the serious inflammatory problems deriving from lipid nanoparticles, the vectors of RNA messenger, inside which, according to numerous researches, graphene oxide was inserted to stabilize them.

Although it is therefore clear that this is a criminal experimentation on the human population, fomented by the speculations of the Big Pharma vaccines financed by Bill Gates in league with the politicians of the European Union and the USA, in Italy the new Minister of Health became the distinguished professor Orazio Schillaci, rector of the University of Rome Tor Vergata which was among the first to join the “National Research Center on RNA messenger gene therapies” in a new project financed by the Ministry of University and Research with EU funds from the National Plan of Recovery and Resilience.

It will be developed together with Pfizer, Biontech and AstraZeneca. that is, the producers of anti-Covid vaccines with lethal side effects in tens of thousands of cases detected throughout the world.

That is why these dangerous and experimental gene sera can only be justified in the shady plot of the New World Order which also created in the laboratory the SARS-Cov-2 from which the Covid-19 pandemic derived.

This is why Gospa News will not stop denouncing the specific responsibilities of every politician or head of state: from Ursula Von Der Leyen to Giorgia Meloni, from Joseph Biden to Sergio Mattarella, up to Pope Francis I, too naively and passively complicit in a diabolical conspiracy against humanity.

MEDRXIV – Change in incidence of cardiovascular diseases during the covid-19 pandemic and vaccination campaign: data from the nationwide French hospital discharge database