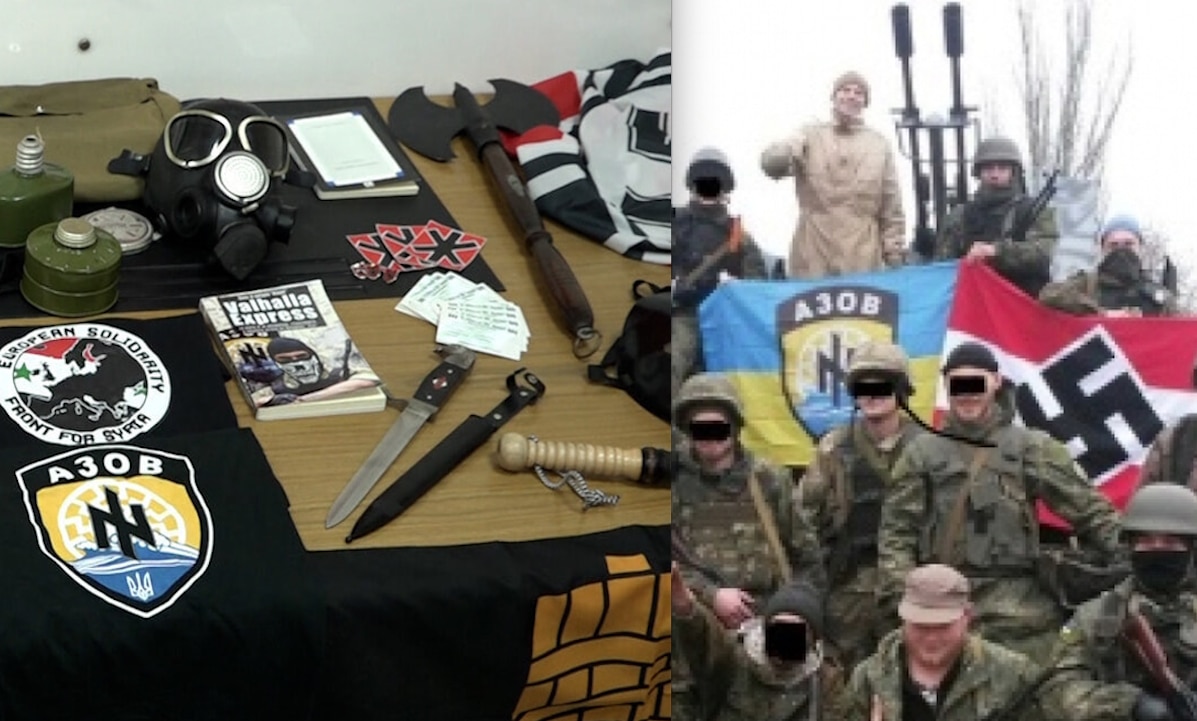 Had it not been for the widespread investigative activity of the Italian State Police through the divisions proposed for anti-terrorism activity (the Digos of the Police Headquarters and the Ucigos at a national level) the worst of the nightmares connected to the war in Ukraine could have become reality.

In fact, last June the director of Interpol raised an alarm on the risk that the weapons donated by NATO countries to the Kiev regime could end up in the hands of criminal organizations.

This was also hypothesized as a consequence of the fact that the Ukrainian National Guard had enlisted among its paramilitary troops, since 2014 with the outbreak of the civil war following the coup financed by George Soros and by the embassies of some countries of the Atlantic Alliance, the neo-Nazi extremists of the Azov Battalion convincingly displaying the symbols of the SS.

The jihadists of the Sheikh Mansour Battalion are also fighting independently, who have recently been joined, thanks to the collaboration between President Volodymyr Zelensky and the American CIA counterintelligence, by former ISIS guerrillas.

Well, the operation conducted in recent days in Italian region of Campania and culminating in 4 arrests confirmed that not only is this risk possible but it was already taking shape in the plans of a young Ukrainian national who had in mind to find the weapons supplied to the Azov Battalion, with whom he has ties and is now fighting, to carry out terrorist attacks in Italy also against a Carabinieri barracks.

Among the most disturbing aspects that emerged in the investigation into the neo-Nazi association “Order of Hagal”, which began in 2019 and resulted in some searches in October 2021, there is in fact the role of Anton Radomosky, a 27-year-old originally from Ternopil but domiciled in Italy in Marigliano (Naples), where he lived with his father.

Before going to fight in Ukraine after the start of the special military operation commissioned by Russian President Vladimir Putin to “de-militarize and de-Nazify” the neighboring country and protect pro-Russians from the systematic genocide in Donbass which lasted 2014 (with over 5 thousand civilian victims).

Radomosky is now wanted by the police because he escaped the precautionary custody order by not being in Italy.

According to Police investigators he had the task of procuring weapons and contributing to the military training of associates and, in particular, he would have offered his “intermediation” between the Order of Hagal and neo-Nazi groups such as the Azov Battalion.

The Italian magistrates maintain that Radomsky, together with another suspect, Gianpiero Testa, a 25-year-old from Marigliano, who ended up in prison, declared he was “ready to carry out terrorist military actions with weapons and explosives against the Carabinieri or against civilian targets”.

Testa kept a photo of himself with Radomsky in the house, displayed on the refrigerator, while they were holding long weapons. In some videos, the two carried out fire exercises together at the range and both had gone several times to war contexts. Among other things, Radomsky would have been in possession of some weapons, including a grenade.

It is not the first time that a paramilitary of Ukrainian nationality is at the center of an investigation connected to the civil war in Donbass and to the continuity with circles of extremist terrorism.

Vitaly Markiv, a soldier of the Ukrainian National Guard with an Italian passport, was accused of the murder of Andy Rocchelli, the Pavia photojournalist killed in the Donbass on May 24, 2014, after “target shooting with a mortar”, together with the interpreter and Russian photographer Andrej Mironov, while a French colleague survived by a miracle.

Markiv, had been sentenced in 2019 to 24 years in prison by the Pavia Court of Assizes and subsequently acquitted, in November 2020, in the appeal process.

This acquittal was later confirmed in December 2021 by the Court of Cassation after multiple international political pressures implemented by members of the Italian Europe + financed party, by Soros who was among the directors of the NATO coup in Kiev, but above all by the then Minister of the Interior of Ukraine Arsen Avakov (in office from 27 February 2014 to 15 July 2021), who was arrested in Italy in 2012 following an international arrest warrant for abuse of office.

In fact, the NGU (Ukrainian National Guard) depends on the Ministry of the Interior in Kiev, where various groups of voluntary militia from the Pravyj Sector (Right Sector) converged, but also from the notorious ultra-right neo-Nazi Azov Battalion, accused by Amnesty International of torture.

According to the investigators, the neo-Nazi Radomosky boasted contacts with both of these extremist formations, heirs of the Ukrainians who during the Second World War collaborated with the Nazis of the Third Reich in the extermination of the Polish Jews who took refuge in Ukraine.

Terrorist ties therefore go far beyond the relations between groups of fanatics such as the Order of Hagal but are rooted in a neo-Nazi culture disseminated in Ukraine by Stephan Bandera with the help of the CIA’s 007s who, in recent years, through the special military department Ground Branch and under specific orders from the US government, also trained the paramilitaries of the Azov Battalion.

An association with the aim of “neo-Nazi, supremacist and denier terrorism” was dismantled today, November 15, 2022, in Campania. Four people were arrested between Naples, Caserta and Avellino. Also ordered is the obligation to submit to the judicial police against another person, in Rome, seriously suspected of propaganda and instigation to commit a crime on grounds of racial, ethnic and religious discrimination. Also carried out about thirty personal home and computer searches throughout the national territory.

The association is called “Order of Hagal” and is based in Marigliano, in the province of Naples. Those affiliated with the prosecution wanted to carry out “glaring violent actions” both against civilians and against members of the police force.

The investigators define the “Order of Hagal as a subversive neo-Nazi, denier and supremacist association.

The investigations were launched in 2019 and already in May and October 2021 they had culminated in the execution of 30 searches. The order issued today by the investigating judge of the Naples court, at the request of the Neapolitan prosecutor’s office, was carried out by Digos and the Central Directorate of the Prevention Police-Ucigos.

Those arrested are accused of association with the aim of terrorism or subversion of the democratic order. They allegedly “set up, organised, promoted and financed a criminal association, also operating through the dissemination of the website of the Order of Hagal association and the use of other social media, aimed at carrying out violent subversive acts, instigating a crime, apology and denial, with the aim of terrorism and subversion of the democratic order, directed and capable of violently subverting the economic and social as well as the political and legal systems of the State, having a neo-Nazi, supremacist character and purpose and of racial, ethnic, and religious”.

The fifth person was instead subjected to the obligation to present himself to the judicial police in Rome. According to the indictment, through Facebook he “exchanged, disseminated and propagated materials, texts and videos on the web, in such a way that there was a concrete danger of diffusion, of neo-Nazi and supremacist ideals based in whole or in part on discrimination on racial grounds as well as on the denial, grossly minimizing or condoning the Holocaust or the crimes of genocide, crimes against humanity and war crimes”.