Home WarZone Ukraine War An American Neo-Nazi who Fought within Azov Battalion Avowes the Crimes of... 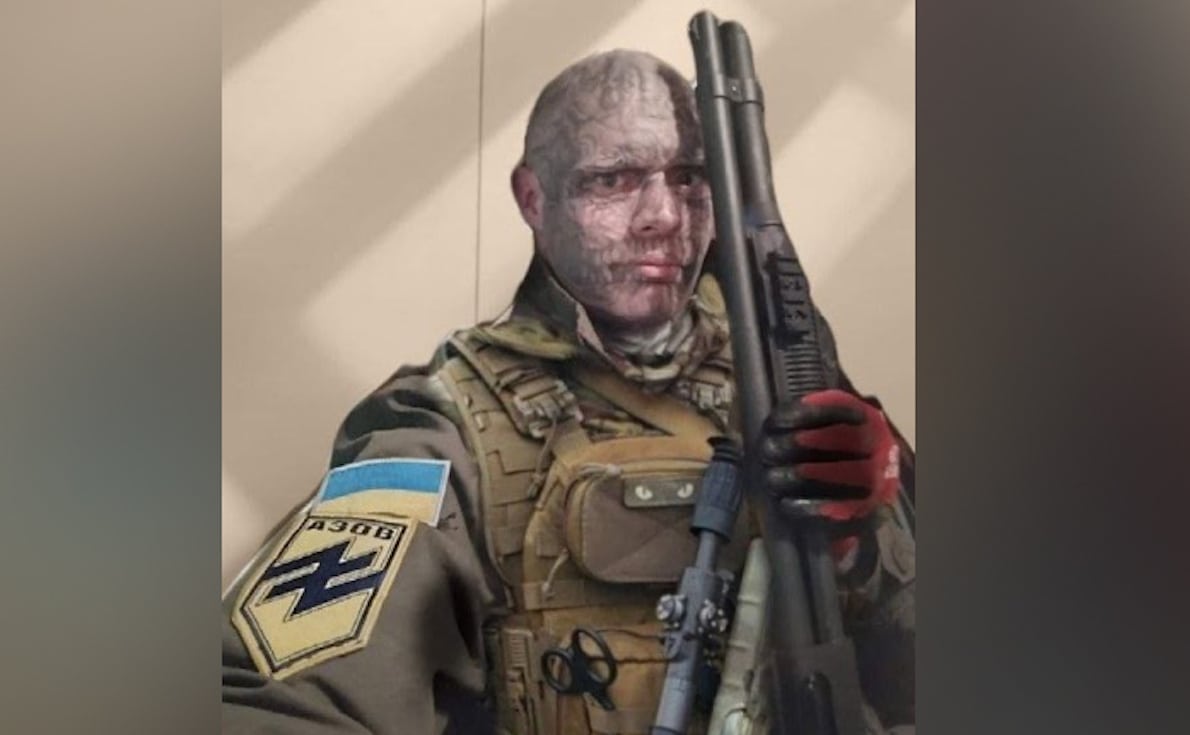 by Felix Livshitz for Russia Today

Earlier this month, Juan Sinmiedo, who runs a popular Telegram channel documenting human rights abuses in Ukraine, published an explosive interview with ‘Boneface’ – real name Kent McLellan – a 32-year-old Neo-Nazi from Florida who joined the fascist volunteer Right Sector group during the Donbass war, and returned to to fight alongside the Azov Battalion in January 2022.

The discussion with McLellan shatters many myths and lies that have been circulated about the Maidan coup, the current conflict in Ukraine, and the disturbingly strong influence of nationalist movements within the country.

McLellan, the son of the front man of Neo-Nazi rock band Brutal Attack, got involved with far-right activism while just a teenager, and had numerous run-ins with the law for subversive, racially-charged activities. He and other members of the racist organization American Front were detained by the FBI in May 2012, for preparing terrorist acts against ethnic minorities in Florida.

It was this background that led him to travel to Ukraine in 2014. The American fascist circles he moved in had direct links and regular contact with nationalist groups at the forefront of the Maidan, which at the time were hosting large public events “nearly daily in every Oblast that wasn’t seeing war.” As did far-right movements in many other nearby countries, including Finland, Georgia, and Latvia.

“In case the world wonders what happened to all the real skinheads. They all went to Ukraine,”McLellan said.

It seems the US government approved of the presence of McLellan and others in Ukraine at that time. He says he got caught – it’s not clear by whom or what – teaching Ukrainians DNS poisoning, and the Americans “wanted to sit in and help.”

“They didn’t want names or anything, but they wanted to monitor the situation. Without this backing I would’ve been charged with violation of [the] American neutrality act,” McLellan claims.

In 2015, an absolutely horrific video began circulating, which purportedly depicted members of the Azov Battalion crucifying a Russian resident of eastern Ukraine, then setting the cross upon which he was literally and bloodily nailed on fire. Around the same time, another clip – titled “Kikes get the rope” – featuring a hanged pregnant woman and her husband, also proliferated online. It was claimed the pair were Jews who had been lynched by Azov fighters.

Multiple Ukrainian and Western government-funded factchecking websites, including the Neo-Nazi sympathizingStopFake, declared the footage to be fraudulent, and did so again in chorus when the gruesome visuals resurfaced widely following February 24.

The Azov Battalion has also repeatedly denied that their fighters were responsible for either heinous act, although their defense was not compelling. It was simply claimed that the Azov logo on the murderers’ uniforms was “much larger than it should be.”

The testimony of McLellan confirms those videos are very real. He in fact features in the crucifixion footage, and took photos of Tornado fighters posing with the corpses of the hanged couple. Though the pair were not in fact Jewish, and their ritualistic murder was too extreme even for his violent tastes – “I wouldn’t have supported an action like that,” he says.

On the subject of Tornado, McLellan refers to the fascist paramilitary battalion as “by far the most horrifying thing I’ve ever seen or dealt with in my life.”

Investigations by Western rights groups concluded that Tornado inflicted absolutely brutal torture on captured separatist fighters and innocent civilians in the Donbass. Prisoners were stripped naked, held in basements, and electric shocks were applied to their genitals and other body parts. Some detainees were forced to rape each other under threat of death.

McLellan was involved in some of Tornado’s savage “interrogations” and suggests that “the treatment of such people is the same with the Russians, I would guess,” in reference to soldiers captured since February 24. A number of Tornado fighters were eventually jailed by the Ukrainian government for their actions. Despite their rap sheets – including the rape of children, torture, and the cold-blooded murder of civilians – they somehow avoided war crimes charges, and typically got light sentences.

For example, the battalion’s founder, Ruslan Onishenko, a sadistic pedophile, received just 11 years in prison in 2017. He is one of several Tornado fighters released from prison by President Vladimir Zelensky since the conflict started, and sent to fight in the “hottest spots.”

Upon his return to Ukraine at the start of this year, Boneface enlisted with the Azov Battalion, and quickly became involved in the fight for Mariupol, which led to him witnessing “a lot of heinous s**t.”

He describes the early stages of the battle as “a lot of shooting at absolutely nothing, and a lot of soldiers not knowing what to do,” and he felt that the citizens of Mariupol “were divided heavily on a pro-Ukraine and pro-Russian stance.”During this time, McLennan alleges, Azov was in talks with the CIA and the Pentagon, which “conducted intelligence operations during the war there.”

It is “American meddling in Ukraine” that caused Russia’s invasion, McLennan believes. While not viewing Russia as “the victim,” he accepts that the country was provoked by Kiev and the West. He is very critical of his fellow countrymen for not knowing that places such as Ossetia exist, or Georgia’s invasion of it.

They just think Russia decides to bomb the f**k out of places for no reason,” McLennan says.

Boneface was shipped back to the US “on an order” after Ukrainian Security Services operatives were busted planning to kill him in a hospital in Kiev. He continues to support Azov “to the fullest,” but he doesn’t support the EU or NATO, and feels if the latter was to get involved in the conflict, “there won’t be anything, as far as a nationalist goes, worth or left fighting for.”McLennan says “there was massive celebration when Ukraine was denied for NATO.”

Echoing the words of the assassinated chief of the Right Sector, “we’re not finished yet, in the Maidan.” McLennan concludes by saying, “I would like to see Russia just go home, and while the government in Kiev is frail, another [Maidan] revolution.”