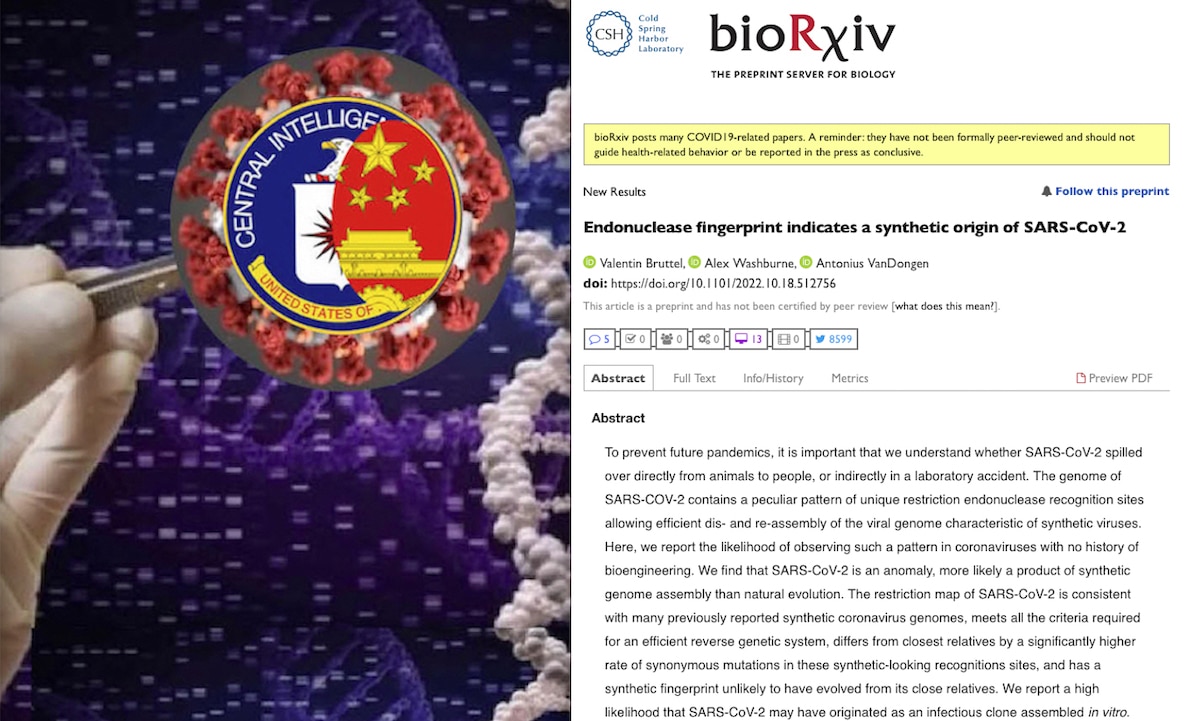 The list of scientists who support the artificial origin of SARS-Cov-2 is growing!

Now even the research of a German and two American scientists is added to the now very long list that confirms that the pathogen of Covid-19, very lethal especially in the first Wuhan genotype, is a genetically modified organism, which caused an alarming pandemic aggravated by incorrect health responses and misinformation imposed by governments,also to hide the laboratory provenance of the virus.

The first to support it were the Indian biologists, also highlighting traces of HIV within the SARS-Cov-2, later confirmed by a research by the late virologist Luc Montagnier, Nobel Prize for Medicine precisely for the discovery of the human immunodeficiency virus.

His publication was further accredited by that of bioengineer Pierre Bricage.

Then came the paper of a Chinese researcher, an FBI-protected whistleblower, and then the study of an American.

It was later discovered that another US scientist had also reported the artificial origin to NIAID director Anthony Fauciwho had concealed the e-mails unearthed by some American congressional lawmakers.

Former US Army colonel Lawrence Sellin, who specializes in bacteriological weapons during his work at the Fort Detrick military biological center, explained the details exactly as did French bio-engineer Bricage.

Finally, an international research also signed by the Italian virologist Giorgio Palù, president of the Italian Medicines Agency (AIFA) revealed the improbable genetic identity of some parts of SARS-Cov-2 with a human gene built in the laboratory in 2016 by Moderna, accused by various doctors of having patented the anti-Covid vaccine 9 months before the discovery of the pandemic.

Furthermore, Russian genomics experts also reported the arificial origin not only of SARS-cov-2 of 2019 but also of its ancestor SARS of 2003.

Here is the summary of this new research in a Russia Today article.

The virus that caused the Covid-19 pandemic was most likely created in a laboratory, a study by German and American scientists has claimsed.

A team of three researchers concluded that Sars-CoV-2 was a genetically modified virus, after comparing its structure to that of “wild”and laboratory-borne equivalents.

Sars-CoV-2 literally has “fingerprints” of genetic manipulations, according to a preprint released by Valentin Bruttel of Germany’s Wuerzburg University, Alex Washburne of the US-based Selva Analytics research center and Antonius VanDongen of Duke University, also in the US. The paper published this week reported that the three scientists had found a recurring genetic structure element called a restriction site, which they describe as a sign of the virus’ genome having been “stitched” together.

“To make a virus in the lab, researchers usually engineer the viral genome to add and remove stitching sites, called restriction sites. The ways researchers modify these sites can serve as fingerprints of in vitro genome assembly,” the paper, which has not yet been peer-reviewed, claims.

The structure of Sars-CoV-2 is “anomalous in wild coronaviruses” but “common in lab-assembled viruses,” it adds, pointing to the certain “synonymous or silent mutations” that differentiate the restriction sites. The concentration of such mutations “is extremely unlikely to have arisen by random evolution,” the preprint says.

The study results show that “this virus is 99.9 percent an artificial, probably manipulated, copy of a natural virus,”Bruttel told Germany’s ntv news media outlet. The researcher said that, during his study, he found the signs of similar manipulations he carries out daily to create protein-based drugs for autoimmune diseases.

Bruttel, who holds a doctoral degree in the field of immunology and was awarded this year’s Innovation Prize at German Biotechnology Days – the national forum of the biotech industry – told ntv he had been working on the study since summer 2021, when he first noticed abnormalities in the virus genome.

The study, however, has been promptly lambasted by other immunologists, including Kristian Andersen of the Scripps Research Institute in La Jolla, California. Andersen branded the paper “nonsense”that was “so deeply flawed that it wouldn’t pass kindergarten molecular biology.” He also presented his own version of Sars-CoV-2 genome analysis in a series of tweets.

German virologist Friedemann Weber, who leads the Institute for Virology at the University of Giessen, said that the “fingerprints” found by Bruttel and his colleagues do not necessarily point to the artificial origin of the virus, since genetic manipulations with it are possible even without the techniques the study was pointing to. At the same time, he admitted that one “can actually do it like” the study suggests it was done but called such a method “not necessary and actually more complicated.”

IGNORED THERAPY: “Anti-SARS Drug Financed by EU but Not Used in Covid Pandemic“. Hard Complaint by Italian Biologist and Lawyer