Home Investigations Jihadists and Nationalists are Driving Increased Persecution of Christians: 7,600 Murdered in... 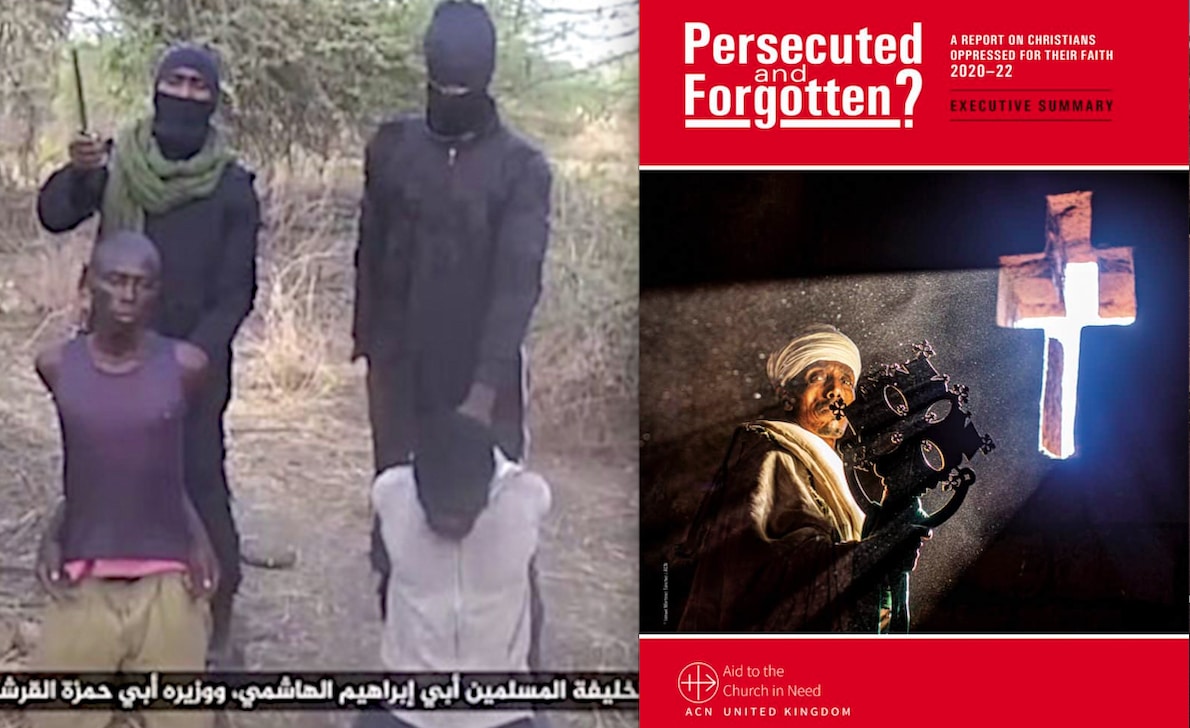 Jihadists and nationalists are driving increased persecution of Christians around the world according to a report unveiled Nov. 16. In various countries around the world, Aid to the Church in Need (ACN) will launch “Persecuted and Forgotten? A Report on Christians oppressed for their Faith 2020-22.”

The report includes information from ACN and other local sources, provides first-hand testimony, compilations of incidents, case studies and country analysis on the extent to which Christians are targeted around the world.

In the UK, the report was presented in the Houses of Parliament with a keynote address by Bishop Jude Arogundade whose Diocese of Ondo in Nigeria was targeted by gunmen who killed more than 40 people at a packed Sunday service on Pentecost Sunday, June 5, 2022.

Amid growing alarm about the increasing violence in parts of the country, Bishop Arogundade said ahead of the event that “no-one seems to pay attention to the genocide” taking place in swathes of Nigeria’s Middle Belt. “The world is silent as attacks on Churches, their personnel and institutions have become routine. How many corpses are required to get the world’s attention?”

“Persecuted and Forgotten?” found that in 75 percent of the 24 countries surveyed, oppression or persecution of Christians has increased.

Africa saw a sharp rise in terrorist violence from non-state militants – with more than 7,600 Nigerian Christians reportedly murdered between January 2021 and June 2022.

In May 2022 a video was released showing 20 Nigerian Christians being executed by Islamist terror group Boko Haram/ISWAP.Terror in Owo, Pentecost Sunday, June 5, 2022

In Asia, state-authoritarianism led to worsening oppression, which “Persecuted and Forgotten?” found was at its worst in North Korea, where religious belief and practice are routinely and systematically repressed.

Religious nationalism has triggered increasing violence against Christians in the region, with Hindutva and Sinhalese Buddhist nationalist groups active in India and Sri Lanka respectively. Authorities have arrested believers and stopped Church services.

India saw 710 incidents of anti-Christian violence between January 2021 and the start of June 2022, driven in part by political extremism. During a mass rally in Chhattisgarh in October 2021, members of the ruling Bharatiya Janata Party (BJP) applauded as right-wing Hindu religious leader Swami Parmatmanand called for Christians to be killed.

The report found that in the Middle East a migration crisis threatened the survival of some of the world’s oldest Christian communities.

In Syria, Christians plummeted from 10 percent of the population to less than 2 percent – falling from 1.5 million just before the war began to around 300,000 today.

“Persecuted and Forgotten?” also found that in countries as diverse as Egypt and Pakistan, Christian girls are routinely subject to systematic kidnapping and rape.

Report author John Pontifex said: “Persecuted and Forgotten?” provides first-hand testimony and case studies proving that in many countries Christians are experiencing persecution – let us do all that we can do to show that they are not forgotten.”

To order a copy of the report, please send your name and telephone number to info@churchinneed.org, putting “Persecuted & Forgotten” in the subject line

“PERSECUTED AND FORGOTTEN? A REPORT ON CHRISTIANS OPPRESSED FOR THEIR FAITH 2020-22.” – In-depth and Geographical Summary in Italian with simultaneous translation into English available here

Report 2021: most of world’s population live in countries that violate religious freedom, and Christians are most often targeted by persecution.

Religious Freedom is violated severely in one out of every three countries. In the last two years, the fundamental right to freedom of belief was not respected in 62 (31.6 percent) of the world’s 196 countries; 67 percent of the world’s population, or 5.2 billion people, live in countries that exhibit grave violations of religious freedom, including China, India and Pakistan, three of the world’s most populous countries. And Christians are most often targeted by persecution. These are among the key findings of the 2021 Religious Freedom in the World report (RFR), published every two years by Aid to the Church in Need (ACN).

In 26 of the 62 countries that do not respect religious freedom people suffer persecution—and in 95 percent of these the situation has worsened during the period under review (2018-2020). Nine countries appear in this category for the first time: seven in Africa (Burkina Faso, Cameroon, Chad, Comoros, Democratic Republic of the Congo, Mali, and Mozambique) and two in Asia (Malaysia and Sri Lanka).

Data reflect the radicalization of the African continent, especially in Sub-Saharan and Eastern Africa, where there has been a dramatic increase in the presence of jihadist militia.

The report highlights another new trend: the abuse of digital technology, cyber networks, and mass surveillance based on artificial intelligence (AI) and facial recognition technology to increase control and discrimination of religious minorities in some of the nations that most severely violate religious freedom. This is most evident in China, which has been oppressing religious groups with the help of 626 million AI-enhanced surveillance cameras. Jihadist groups are also using digital technology for the radicalization and recruiting of followers.

Another Priest Killed in Africa where ongoing Christians’ Massacre. Appeal by Aid to the Church in Need to Italian Parliament

Violations of religious freedom—including extreme persecution such as mass killings—are now occurring in 42 percent of African countries. The report also reveals a rise of transnational Islamist networks stretching from Mali to Mozambique in Sub-Saharan Africa, to the Comoros in the Indian Ocean, and to the Philippines in the South China Sea, with the aim of establishing a “transcontinental caliphate.”

In other findings, the research showed that in 42 countries renouncing or changing one’s religion can lead to severe legal and social consequences, ranging from ostracism within the family to even the death penalty. The RFR also notes the increase of sexual violence used as a weapon against religious minorities—in particular crimes against women and girls who are abducted, raped, and forced to convert.

According to the report, religious persecution by authoritarian governments has also intensified. The promotion of ethnic and religious supremacy in some Hindu and Buddhist majority countries in Asia has led to further oppression of minorities, often reducing their members to de facto second-class citizens. India is the most extreme example, but similar policies apply in Pakistan, Nepal, Sri Lanka, and Myanmar among others.

In the West, the report concludes, there has been a rise in “polite persecution,” a term coined by Pope Francis to describe how new cultural norms and values come into sharp conflict with individuals’ right to freedom of conscience, consigning religion “to the enclosed precincts of churches, synagogues or mosques.”

The research also addresses the profound impact of the COVID-19 pandemic on the right to religious freedom. Faced with the magnitude of the emergency, many governments imposed extraordinary measures, in some cases applying disproportionate limitations on religious worship, as compared to other, secular activities. In some countries, such as Pakistan or India, humanitarian aid has been withheld from religious minorities. The pandemic was also used as a pretext to stigmatize certain religious groups on social media, blaming them for allegedly spreading or even causing the pandemic.

ACN Executive President Dr. Thomas Heine-Geldern concluded: “Regrettably, despite the, albeit important, UN initiatives and the staffing of religious freedom ambassadorships, to date the international community’s response to violence based on religion, and religious persecution in general, can be categorized as too little, too late.”

First published in 1999, the biennial report analyzes the extent to which the fundamental human right to religious freedom, protected under Article 18 of the Universal Declaration of Human Rights, is respected for all religions in the 196 countries of the world.

For the full text of the report, please click here

SOURCE – AID TO CHURCH IN NEED