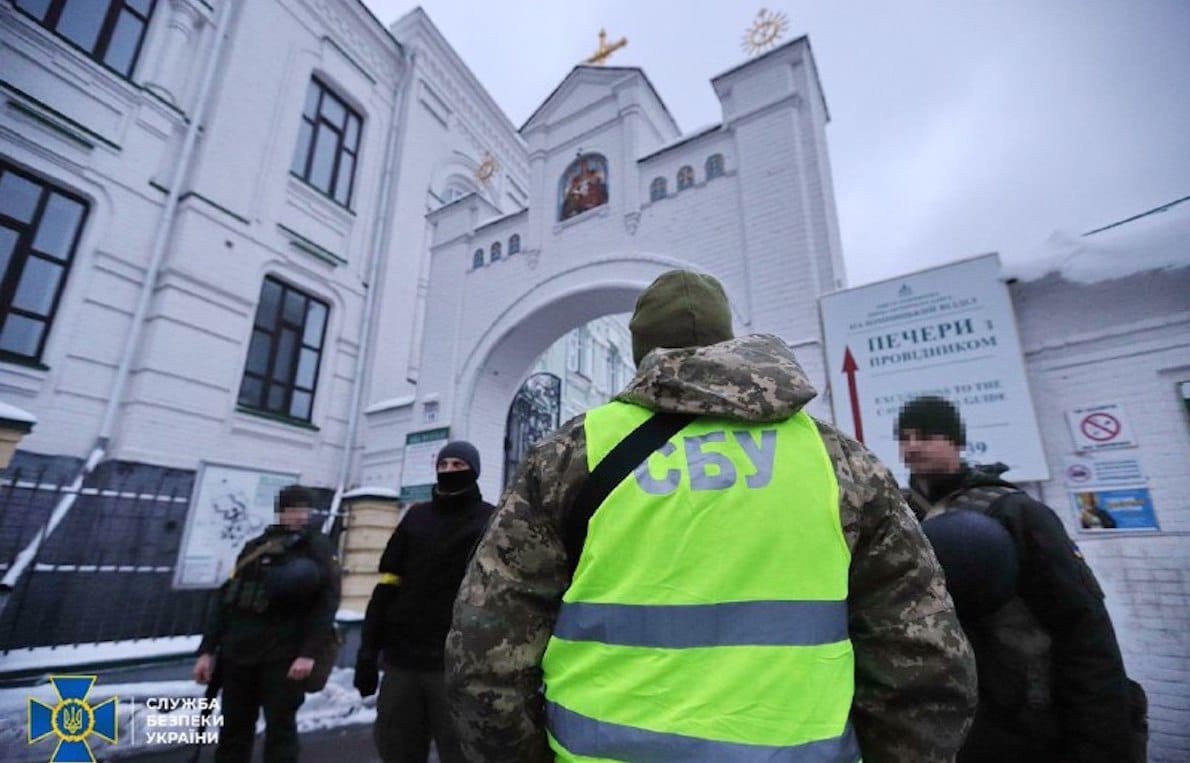 Thanks to the armed protection of NATO, Ukraine is continuing to perpetrate continuous violations of human rights sanctioned by the UN which add to the war crimes for which Amnesty International has denounced the neo-Nazi paramilitaries of the Azov Battalion operating under the control of the Ministry of the Interior as members of the Ukrainian National Guard (GNU).

After the well-known discrimination of the pro-Russian linguistic and ethnic minority, which still cries out in vain for vengeance in front of the United Nations Headquarters, religious persecution against the Russian Orthodox Church, which recognizes the authority of the Patriarch of Moscow, is now breaking out.

First the dangerous 007s of the SBU, the Ukrainian Security Service which on March 5 killed a peace negotiator from Kiev in cold blood on suspicion of treason, raided a monastery in Kiev to hunt for alleged spies.

Then a Ukrainian parliamentary group presented a bill to ban all activities of the Russian Orthodox Church in the country. (details by Russia Today below).

The news became public knowledge on the same day that the European Parliament adopted a non-binding resolution defining Russia as a “state sponsor of terrorism”.

We avoid reporting this other act in detail because we agree with the opinion expressed by Russian Foreign Ministry spokeswoman Maria Zakharova according to which the European Parliament “should be designated as a sponsor of idiocy”.

THE SCHISM OF THE UKRAINIAN ORTHODOX CHURCH IN 2018

The military clash between Ukrainians and pro-Russians living in the country erupted in 2014 after the coup hatched in Kiev by NATO countries and the outbreak of civil war in Donbass.

In May 2022, as highlighted in a previous Gospa News article, the conflict also became religious in response to the blessings of Moscow Patriarch Kirill for Russia’s special military operation.

An intervention carried out by Russian President Vladimir Putin after years of useless peace treaties in Minsk to protect the separatist republics of Donetzk and Lugansk from the ongoing genocide carried out by the Kiev regime precisely through the ferocious guerrillas of the Azov Battalion, neo-Nazis but also Satanists, as evidenced by the tattoos displayed by the Russian army when it captured them in Mariupol.

In December 2018, the Orthodox Church of Ukraine (Pravoslavna Cerkva Ukraïny) was in fact founded under the impetus of President Petro Poroshenko (and of NATO which supported him) and under the aegis of the Patriarchate of Constantinople which recognized its autocephaly.

In May, after the outbreak of war in Ukraine, the Orthodox religious authorities of Kiev entered a collision course with those of Moscow, also opening a dialogue with the Ukrainian Orthodox Church (Ukrayinska Pravoslavna Tserkva) which declared independence from Moscow earlier this year.

THE LAW OF DISCRIMINATION OF THE RUSSIAN LANGUAGE

Poroshenko, on the other hand, before giving way to his successor Zelensky, signed an important and controversial law with serious implications for the linguistic issue.

«We are talking about the language law (law n° 5670-d), definitively approved on 25 April 2019, with 278 votes in favor out of 450. After thousands of other amendments and revisions, it was approved in first reading on 4 October – wrote the Italian newspaper il Sole 24 ORE – The new law removes the status of regional languages ​​from minority languages, including Russian, and drastically limits their use in the public sphere. In the text, Russian is never in the document, unlike for example English, mentioned eighteen times. Andrij Parubij, spokesman for the Rada, called the law a matter of national security for the country. A law that made the Russian-speaking population aware of the deliberate intention of the Ukrainian government to implement a policy of “Ukrainization”».

This legislation became enforceable despite being in clear conflict with the Resolution of the General Assembly of the United Nations 47/135 of 18 December 1992. The first articles are unequivocal:

The question is not of little importance because, as the Italian Confindustria newspaper always pointed out, according to a survey carried out by the International Institute of Sociology of Kiev in 2004, in reality Russian is used much more often than what the official census says. 43-46% of the population speak Russian at home. A percentage very similar to that of the population that speaks Ukrainian. According to this survey, most of the population in the southern and eastern regions of Ukraine speaks Russian.

The same surveys show that in Ukraine ethnic Russians accounted for 56% of the total population of Russian native speakers, while the remaining 44% was made up of Ukrainians, Belarusians, Jews, Greeks, Bulgarians, Moldovans, Armenians, Tatars, Poles, Germans and Crimean Tatars.

Despite this, the law n° 5670-d of 2019 was used by Zelensky to deprive pro-Russian populations of the right to use their native language in official documents in clear contrast to the 1992 UN resolution.

KIEV PARLIAMENT’S ATTACK ON THE RUSSIAN CHURCH IN UKRAINE

Ukraine’s parliament, the Verkhovnaya Rada, has registered a bill seeking to completely ban the activities of the Russian Orthodox Church (ROC) on Ukrainian territory, as lawmakers insist the church poses a threat to security and the national order of Ukraine.

The bill was initiated by former President Pyotr Poroshenko’s European Solidarity party, whose co-chair, Irina Gerashschenko, announced the move on Facebook on Tuesday. He even suggested that the ROC “was not a church, but an ideological organization promoting the ‘Russian world'”.

He also accused the Moscow Patriarchate of using the Kiev Pechersk Lavra monastery – the main Orthodox Christian monastery in Ukraine – as an “anti-Ukrainian cell of the Kremlin”.

Lavra is currently under the control of the Ukrainian Orthodox Church (UOC), which declared independence and autocephaly from the Moscow Patriarchate earlier this year, following the outbreak of the ongoing conflict between Russia and Ukraine. However, the schismatic Orthodox Church of Ukraine (OCU) has laid claim on the monastery as well.

This bill is in contrast not only with the resolution of the General Assembly of the United Nations 47/135 of 18 December 1992 but also with the previous one, on the freedom of worship.

Resolution 36/55 of November 25, 1981 against religious discrimination in article 2 reads as follows:

There is a well-founded fear that the geopolitical interests of NATO, which go hand in hand in Washington as in Rome with those of the Weapons Lobby, may continue to legitimize any aberrant discrimination by the Kiev regime against the Russians, gradually pushing the Ukrainian president Volodymyr Zelensky to follow in the footsteps of his fellow countrymen who exterminated 1.6 million Jews during World War II in collaboration with Adolf Hitler’s SS. 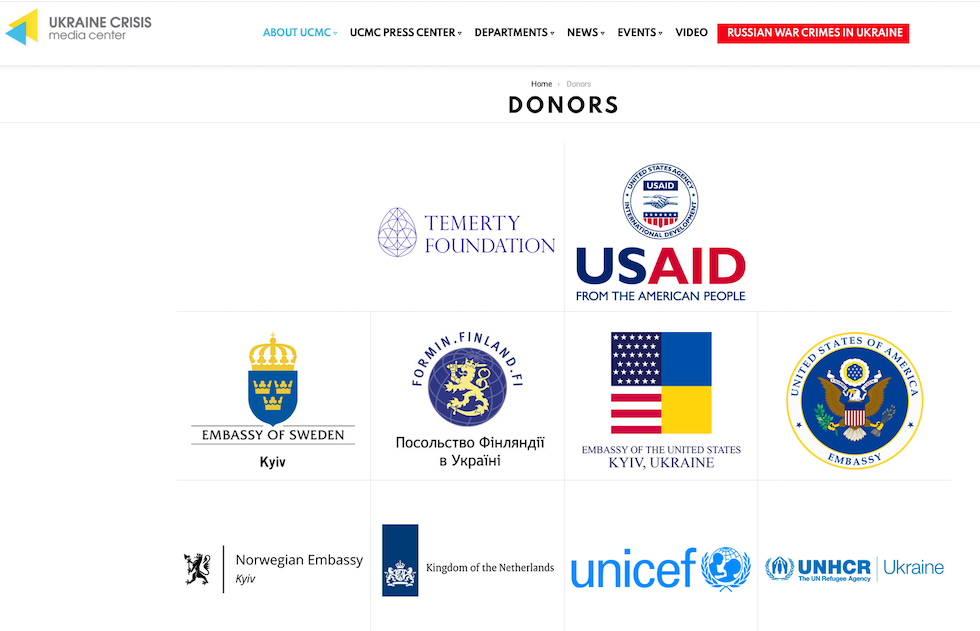 The Ukraine Crisis Media Center, a Ukrainian pro-government body and think tank, funded by Western governments and private individuals, describes here – albeit apologetically – the logic of ethnic-cultural cleansing and the chronology that led to the 2019 law 5670-d.

It seems incomprehensible how US and EU public opinion could support a policy diametrically opposed to their own fundamental values and UN resolutions with regard to the rights of the Russian ethnic group of Ukraine.

Or is it a specific pilot project conducted by the New World Order in complicity with Kiev, such as the dangerous bacteriological laboratories of the American Pentagon financed by former CIA director Leon Panetta during the Obama-Biden administration suspected of having contributed to the construction of the SARS-Cov-2 bio-weapon, for the experimentation of an advanced International totalitarian regime of the Third Millennium?

Ukraine’s parliament, the Verkhovnaya Rada, has registered a bill that seeks to completely outlaw the activities of the Russian Orthodox Church (ROC) on the territory of Ukraine, as lawmakers insist the church poses a threat to Ukraine’s national security and order.

The bill was initiated by former president Pyotr Poroshenko’s European Solidarity party, whose co-chairman, Irina Gerashschenko, announced the move on Facebook on Tuesday. She suggested that the ROC was “not a church, but an ideological organization promoting the ‘Russian world’.” She also accused the Moscow Patriarchate of using the Kiev Pechersk Lavra monastery – Ukraine’s main Orthodox Christian monastery – as an “anti-Ukrainian Kremlin cell.”

The proposed legislation seeks to outlaw the activities of all religious organizations and institutions that are part of or recognize subordination to the ROC “in canonical, organizational, and other matters.”

“The liberation of Ukraine from the Russian Orthodox Church is another step towards a free and independent Ukraine,” the co-chair concluded.

Russian officials have already slammed the bill, with Senator Olga Kovitidi stating it signals “the beginning of the end”for Ukraine and would be a fatal mistake for President Vladimir Zelensky if passed. 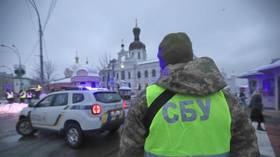 As the bill was being submitted to the Rada, Ukraine’s domestic security agency, the SBU, launched a raid targeting the Kiev Pechersk Lavra, claiming it could be housing Russian saboteurs and weapons. The SBU reported on Wednesday that it had found “pro-Russian literature,” millions in cash and “suspicious Russian citizens” during its raid. Over 50 people reportedly underwent “in-depth counterintelligence interviews,” including with the use of a polygraph.

The Moscow Patriarchate has condemned the raid, saying it was yet another attempt to “intimidate” the Orthodox faithful. Kremlin spokesperson Dmitry Peskov has also stated that Ukraine has “long been at war with the ROC,” and that the SBU raid was “another link in the chain of military actions against Russian Orthodoxy.”

“Like many other cases of persecution of believers in Ukraine since 2014, this act of intimidation will almost certainly go unnoticed by those who call themselves the international human rights community,” Legoyda said in a Telegram post, urging all “caring people” to do everything possible to stop the “persecution.”

The SBU raided the monastery, claiming it was targeted to prevent the “subversive activities of Russian special services.”The monastery needed to be checked for “teams of saboteurs, foreign citizens, weapons, etc.” the service claimed, adding that the goal was to “prevent the use of the Lavra as a cell of ‘Russian world.’”

Kiev Pechersk Lavra dates back to the 11th century and is considered to be the most prominent Orthodox Christian site in Ukraine. Control over the religious complex, however, has been contested by rivaling churches active in Ukraine.

Ukraine has long experienced religious tensions, with multiple unrecognized and semi-recognized entities claiming to be the true Ukrainian Orthodox Church and challenging the authority of the Moscow Patriarchate. The two main factions are the Ukrainian Orthodox Church (UOC), which declared independence from Moscow earlier this year, citing Russia’s military operation in the country, and the Orthodox Church of Ukraine (OCU), which was established in 2018 with the help of then-president Pyotr Poroshenko and is considered by the ROC to be schismatic.

The Mysterious Money Raising by “Aid to Ukraine”, the US Democratic Party and the Suspicious Collapse of the FTX Crypto

Biden’s Grants of up to $500,000 to “Promote Atheism Worldwide”: Republicans against US Funding for Asian and Muslim Countries