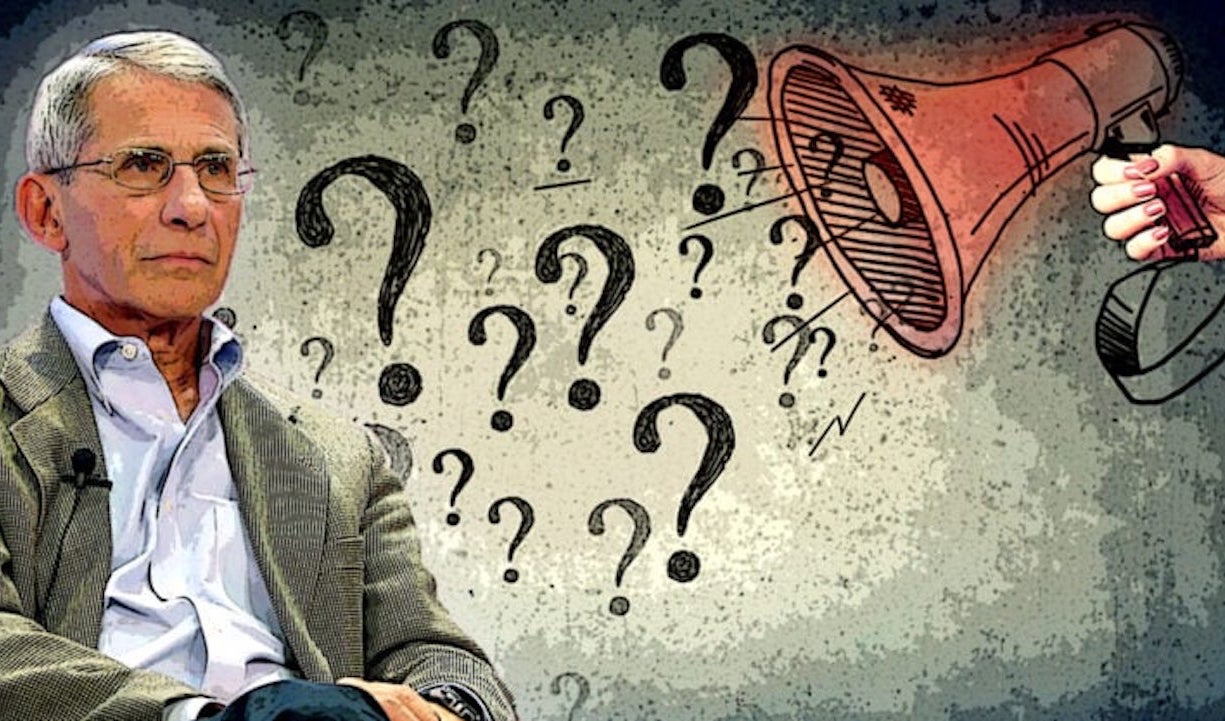 by Michael Nevradakis, Ph.D. for The Defender – All links to Gospa News articles have been added aftermath

Fauci sat for a deposition one day after the 5th U.S. Circuit Court of Appeals temporarily halted the depositions of three other Biden administration officials.

In a statement released Tuesday in advance of Fauci’s deposition, Schmitt said:

“Tomorrow, along with my colleague from Louisiana, my Office and I will depose Dr. Anthony Fauci in our lawsuit against the Biden Administration for allegedly colluding with social media companies to censor freedom of speech.

“Since we filed our landmark lawsuit, we have uncovered documents and discovery that show clear coordination between the Biden Administration and social media companies on censoring speech, but we’re not done yet. We plan to get answers on behalf of the American people. Stay tuned.”

“We all deserve to know how involved Dr. Fauci was in the censorship of the American people during the COVID pandemic; tomorrow, I hope to find out.

“And I will continue fighting for the truth as it relates to Big Government colluding with Big Tech to stifle free speech.”

Schmitt and Landry sued President Biden, Fauci and others on May 5. New Civil Liberties Alliance, a nonprofit group representing outspoken critics of COVID-19 vaccines and countermeasures, including Drs. Jayanta Bhattacharya, Martin Kulldorff, Aaron Kheriaty and also Jill Hines, joined the lawsuit in August, as did Jim Hoft, founder and editor-in-chief of The Gateway Pundit.

According to the complaint, government officials colluded with and coerced Big Tech and social media platforms to “suppress disfavored speakers, viewpoints and content” relating to COVID-19.

Several officials named in the suit, including former White House press secretary Jen Psaki, argued they shouldn’t be required to be deposed, but a federal judge on Monday denied a request to quash Psaki’s subpoena.

In addition to Fauci and Psaki, other government officials slated to be deposed include:

Two lower-level officials were listed as alternates: Lauren Protentis of the Cybersecurity and Infrastructure Security Agency in place of Easterly, and former White House COVID-19 adviser Andrew Slavitt in place of Flaherty.

A previous ruling had forced the above-named individuals to provide written testimony.

In his Oct. 21 ruling, Judge Doughty agreed with the plaintiffs that Fauci’s prior “self-serving blanket denials”regarding his role in censoring certain types of content and viewpoints on social media could not be taken at face value, necessitating a deposition.

Fauci challenged the order to sit for a deposition, arguing the communications in question are protected by executive privilege. But Judge Doughty ordered Fauci to turn over the documents within 21 days and to answer the plaintiffs’ questions in full.

Landry and Schmitt filed a request for depositions Oct. 10. In a statement released at the time by Schmitt, he said:

“After finding documentation of a collusive relationship between the Biden administration and social media companies to censor free speech, we immediately filed a motion to get these officials under oath.

“It is high time we shine a light on this censorship enterprise and force these officials to come clean to the American people, and this ruling will allow us to do just that. We’ll keep pressing for the truth.”

In an order issued Monday, the New Orleans-based 5th Circuit temporarily halted the scheduled depositions of Easterly, Flaherty and Murthy.

According to Politico, the three-judge panel unanimously found Judge Doughty had erred in approving the depositions without first examining whether there were “other means” of obtaining the information the plaintiffs are seeking.

The court sent the case back to Doughty for further review. According to the order:

“Thus, before any of the depositions may go forward, the district court must analyze whether the information sought can be obtained through less intrusive, alternative means, such as further written discovery or depositions of lower-ranking officials.

“Written findings as to the availability and sufficiency of alternatives need to be entered.”

In a statement provided to The Defender by Landry’s office, Landry said, “These developments do not change my pursuit of the truth. We respect the court’s decision and will continue in the discovery phase of this case.”

Thursday’s court order came after lawyers for the government argued the plaintiffs should not have the ability to depose the three officials in question, on the basis that they are high-ranking government officials, and that the depositions would “unavoidably distract” them from “their important and time-sensitive duties,” which would “cause irreparable harm.”

However, the federal government’s motion for a partial stay of Judge Doughty’s deposition order was denied. The Nov. 21 order stated, “We make no ruling on the petition … at this time.”

Easterly, Flaherty and Murthy were scheduled to be deposed in early December.

On Wednesday Judge Doughty, in a separate ruling, ordered Psaki to sit for a deposition and rejected an attempt to shield FBI Agent Chan from answering questions under oath.

Plaintiffs in the case argued that none of the officials were “high-ranking,” and Judge Doughty agreed, finding that the “burdens” the officials would face as a result of sitting for depositions were outweighed by the necessity of gathering more information regarding the allegations in question prior to ruling on a motion for a preliminary injunction.

According to the 5th Circuit’s order:

“It is not enough, as the district court found, that these officials may have ‘personal knowledge’ about certain communications.

“That knowledge may be shared widely or have only marginal importance in comparison to the ‘potential burden’ imposed on the deponent.”

According to the court, the government already produced “extensive written discovery.” The government claims that these documents do not reveal any violations of the First Amendment, while the plaintiffs claim otherwise.

Politico also reported that the 5th Circuit asked Judge Doughty to consider ruling on the overall viability of the lawsuit before allowing the depositions to proceed.

According to Politico, the 5th Circuit’s order is not final: Judge Doughty may still decide, based on a newly clarified analysis, that depositions of Easterly, Flaherty and Murthy are needed.

Politico also reported that the 5th Circuit’s order may strengthen efforts by Psaki and the U.S. Department of Justice (DOJ) to halt her deposition.

At a recent hearing, Psaki’s lawyers claimed there is no evidence she had met or had been in contact with any social media executives regarding purported “misinformation,” although she did express critical remarks about social media platforms during White House press briefings.

In his Nov. 21 order, Judge Doughty rejected that claim, writing:

“Despite the fact that Psaki is a former high-ranking official, the potential burden upon Psaki was outweighed by the need to determine whether free speech had been suppressed.”

Previously, a federal judge in Virginia rejected the arguments made by Psaki and the DOJ, including that sitting for a deposition would place an “undue burden” on her, taking her away from her family and her new job at MSNBC for several days.

Magistrate Judge Ivan Davis of the U.S. District Court for the Eastern District of Virginia passed the issue to Judge Doughty. Davis dismissed Psaki’s claims, arguing that Psaki and the DOJ were attempting an “end-run” around the deposition order.

Judge Doughty previously found “that Plaintiffs have proven that Jennifer Psaki has personal knowledge about the issue concerning censorship across social media as it related to COVID-19 and ancillary issues of COVID-19.”

“Psaki has made a number of statements that are relevant to the Government’s involvement in a number of social-media platforms’ efforts to censor its users across the board for sharing information related to COVID-19,” Judge Doughty added. “Any burden on Psaki is outweighed by the need to determine whether free speech has been suppressed.”

Originally published by Michael Nevradakis, Ph.D. for The Defender

Michael Nevradakis, Ph.D., based in Athens, Greece, is a senior reporter for The Defender and part of the rotation of hosts for CHD.TV’s “Good Morning CHD.”