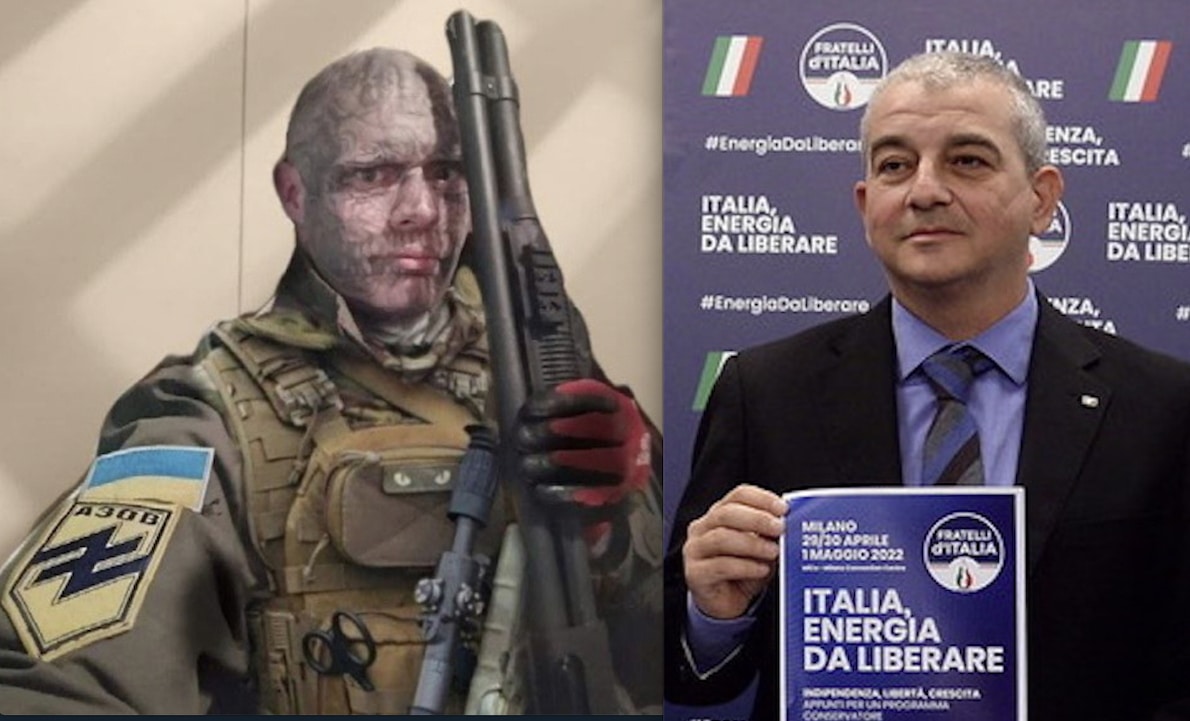 Cuiusvis hominis est errare: nullius nisi insipientis, in errore perseverare (“it is common to err; it is only of the ignorant to persevere in error”).
Cicero – Philippics (XII. 5)

Humanum fuit errare, diabolicum est per animositatem in errore manere (“to fall into error was proper to man, but it is diabolical to insist on error out of pride”).
St. Augustine of Hippo – Sermones (164, 14)

Being an ultras is not a sin: if you are in a football stadium or in a basketball hall and you don’t use violence. Being a fan, let alone, if you let off steam at the concert of your favorite singer before returning to normal.

But cheering on a far-right paramilitary organization denounced by Amnesty International for war crimes and human rights violations and officially declared terrorist by a state, is something that does not suit some politicians …

In particular, it does not suit former militants of the Youth Front which was born as a nursery of the Italian Social Movement but has been repeatedly labeled as neo-fascist, post-fascist or in any case of the radical right; especially in the Years of Lead when the ideologies of some members turned into beatings, clashes and murders.

This is why a long-time politician should not paint the ferocious extremist militiamen of the Azov Battalion (a member of the Ukrainian National Guard) as “heroes”, especially if he is considered the “guru” of the leader of a right-wing party such as Fratelli d’Italia (Brothers of Italy) who, before and after the victorious elections of 25 September 2022, he took his heart and breath to disavow any nostalgia for Fascism and for the Duce Benito Mussolini.

THE MELONI GURU BREAKS EGGS IN THE RIGHT-BASKET

The 50-year-old project manager Giovanbattista Fazzolari thought about breaking the eggs in the basket, a professional life spent jumping from one public office to another as befits the most powerful politicians recommended,before joining the Senate of the Republic and becoming the ideologue of Giorgia Meloni.

The times of “God, Country and Family” of the virtuous triad of Mussolini appear far away, as they have been replaced by the neo-pagan trimurti represented by “New World Order, European Union and Lobby of Weapons and Big Pharma”, to which the the first woman to be appointed Prime Minister in Italy immediately knelt.

But the worst specters of Nazi-Fascism, aberrant in the racial laws but edifying in the social reforms of the twenty-year period, have been evoked by the news episodes that Gospa News has written in recent days.

I am referring to the Ukrainian extremist of the Order of Hagal, domiciled in Naples, who wanted to attack a Carabinieri barracks thanks to the weapons of friends of the Azov Battalion.

And to the American skinhead who has carried out various missions in Ukraine as a “foreign fighter” and confirmed torture and brutal killings (civilians nailed to a cross and burned alive) by the same paramilitary group in which he fought.

If the praise to the Azov Battalion, declared a terrorist organization by Russia and reported to the International Criminal Court in The Hague since 2014, when the systematic genocide of the pro-Russians of the Donbass began after the NATO coup in Kiev, had been pronounced by the usher of the the headquarters of the Brothers of Italy, perhaps it would only arouse a few biting jokes and nothing more.

Since the paean to the Ukrainian neo-Nazis was instead sung by Fazzolari who became Undersecretary of the Government Program of Prime Minister Meloni, from whom he has been considered trusted adviser for 25 years, it is legitimate to begin to ask legitimate doubts if the nostalgia of the squadrists with the black shirt have really been buried and forgotten in the bosom of the Brothers of Italy.

I was among the few and among the first to define the Meloni government, at the time of its inauguration, an elite devoted to the NWO and to the strong powers but far from far-right ideals, despite as half of the newspapers of the world screamed.

I then dedicated an extensive report on Meloni and his other mentor Guido Crosetto, who passed from president of the Italian Weapons Federation to Minister of Defense despite the controversy over the obvious conflict of interest, in relation to their affiliation to the American think tanks controlled by Rockefeller. Foundation.

Now, however, I have some suspicion of having sinned with naivety. Together with the certainty that every surge of fascism could now harbor only the worst part of it.

THE “HEROISM” OF THE NEO-NAZISTS OF THE AZOV BATTALION

After this broad premise we come to the facts that have already been the subject of some journalistic inquiries in relation to the positions expressed by Senator Fazzolari in the most incandescent moments of the war in Ukraine.

It should not be forgotten that the Meloni party has also always given its support to the previous Draghi government in supplying arms to Kiev.

In the eye of the storm some tweets by the ideologue of the Brothers of Italy have ended up salaciously stigmatized by the weekly L’Espresso, which, being on the left, never misses an opportunity to look for traces of far-right revenge.

We report the entire paragraph omitting the previous one in which reference is made to when the senator had defined Sergio Mattarella as “aspiring demon” as he was reconfirmed President of the Republic with 665 votes, one less than the number of the Beast:

«More recently Fazzolari has shown himself to be a great supporter of the Azov battalion, skipping its profiles, let’s say, in chiaroscuro. In a tweet accompanied by a map of Mariupol, with the Azovstal plant in the center, he wrote: “It doesn’t matter how you think about this war. Heroism always arouses admiration, even that of the enemy. And the defense of the Ukrainian city of #Mariupol, surrounded and besieged for 59 days, will go down in history thanks to the courage of its defenders. Honor to them “. it was April 23, now the tweet is deleted.

«Also in April, a few days earlier, he was exalted: “#Mariupol had to fall after a few hours, already on February 24th. Surrounded, without supplies, with the defenders clearly outnumbered. Against all odds, all logic, all laws of nature, a handful of Ukrainian heroes have been defending the city for 47 days. And enter history ”, he wrote on 11 April. Then he added, on the same day: “And now the comments of the cowards will arrive, of those homunculi incapable of any act of courage or even of dignity. Here they are unleashing all their resentment against those who have the courage that they never had and never will have ”».

Even the neo-Nazis of the Azov Battalion had little courage that, in order not to die of hunger and thirst under the siege of the Moscow troops, loyal to the order of Russian President Vladimir Putin so that not even a fly should come out of the steelworks, accepted a dignified surrender that Russia exploited to show the world who those paramilitary extremists were.

It was a great media victory for Putin: in front of the few honest journalists who try to provide correct information and would like no longer to see around those symbols of Nazism whose apology has been forbidden almost all over the world.

Also because this fanatical exaltation of war heroism takes on an “explosive” significance if added to the politician’s love for guns, sports shooting and his parliamentary battle for the right of every citizen to be armed …

Indeed, he obtained the removal of the Italian ban on the sale to civilians of the semiautomatic DWM parabellum caliber 9×19, as it was supplied only to NATO armies. (here link to video in Italian).

Let’s go back to the point. The removal of the Tweets on Ukraine leads us to believe that Meloni’s “favorite” included the banana peel on which she was dancing with her not very ethereal bulk and with the ghosts of a party heir to the radical right … Not at all!

When he attributed to the Espresso “mud” the exclusion from a ministerial post, which as an ideologue of the leader of the Brothers of Italy would have fallen to him by right, he persisted in defending his praise of him in favor of the Ukrainian neo-Nazis.

“With Meloni’s decision, explains Fazzolari, the past tweets against the Head of State or in favor of the Azov battalionhave nothing to do with: “I gave the right tribute to the heroic defenders of Mariupol and I claim it. And on Mattarella they weren’t. personal attacks but classic tweets of disapproval on choices I did not share. But my name on the list has never been in those positions “» confirmed October 22, 2022 in an interview with Italian newspaper Corriere (relaunched by Libero), exulting for the “Historic day” of the establishment of the Meloni government.

Now every reader will finally be able to understand the reason for the two quotes in the opening of the article: to err is human …

To persevere is as ignorant or as proud diabolical, depending on whether the secular vision of Cicero or the Christian one of St. Augustine is preferred.

We, in the case of Fazzolari, trust benevolently in the first …

Otherwise we would be forced to agree with the Anglo-Saxon newspapers that sounded the alarm about the rise to power in Italy of “far right” rulers.