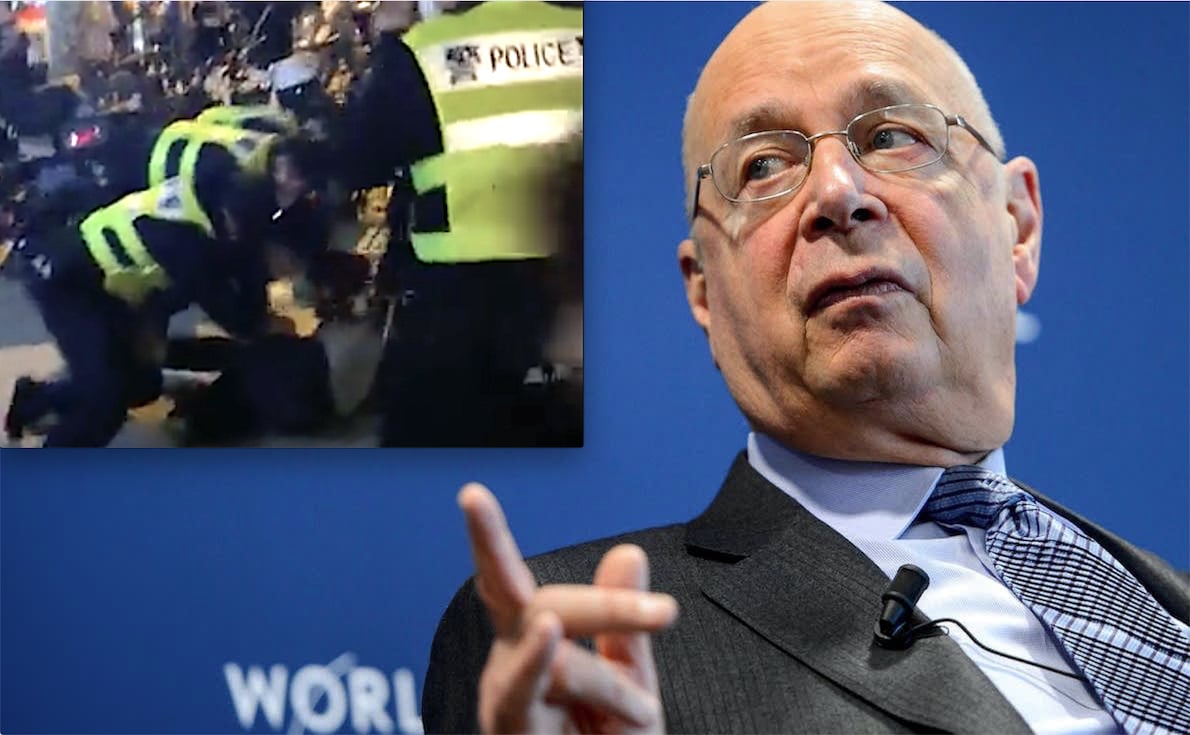 For one of those curious coincidences of fate, which a Christian could define as a sign of the Apocalypse understood in its original etymological meaning of “revelation”, a week after the declarations with which the president of the World Economic Forum Klaus Schwab defined China as a “social model” for the planet, the great slant-eyed nation finds itself at the center of one of the greatest popular uprisings in its recent history.

The head of the WEF is a theorist of the Great Reset like Charles III King of England but, above all, like Bill Gates, financier of the WEF and world emperor of vaccines, who, thanks to the recent pandemic triggered by a laboratory-built SARS-Cov-2 virus, it is pushing humanity towards such an extreme digital control planned, with the excuse of health protection, as to induce Schwab to hypothesize the forced implantation of a microchip even in children.

In recent days, the Declaration of the G20 Leaders in Bali has in fact signed the commitment of all the nations participating in the meeting to promote Green Pass forever and to increase therapies with dangerous messenger RNA gene serums.

His praise for the People’s Republic of China, torn apart by the contradictions between an alleged order sanctioned by the “social credit” which rewards citizens most faithful to the rules of the Communist Party of China and between an oppression of the most basic freedoms in blatant violation of human rights, is was expressed during the APEC Economic Leaders’ Meeting and the APEC CEO Summit which took place on 19, November in Bangkok.

«As the region is one of the most dynamic regions of the world today, the annual APEC events have also become hubs for movers and shakers around the world. Among them is Klaus Schwab, the founder of the World Economic Forum. He sat down with CGTN’s Tian Wei and shared his observations about whether major economies of the region and the world can shore up global governance» reads the event website..

Over the last weekend, however, the Chinese system went haywire due to the massive protests of the people against the persistent and suffocating restrictions that for three years have imposed severe lockdowns on the population due to the “zero-Covid” political strategy of President Xi Jimping, just reappointed as powerful secretary of the Communist Party of China.

This is grafted onto the controversies that have broken out in the USA on the origin of the pandemic virus following dangerous uncontrolled experiments conducted by the NIH (National Institue of Health) precisely together with the shady Wuhan Institute of Virology laboratory and important Chinese scientists, with the explicit consensus of the governments that preceded Xi’s one.

Below the article on Schwab policy and the link to report on the rising of Mass Anti-Lockdown Protests in China.

The Mask Is Off: WEF’s Klaus Schwab Declares China a “Role Model”.

by Monica Showalter via AmericanThinker.com – All links to Gospa News articles have been added aftermath.

Once upon a time, the Soviets had a tightly controlled network of internationalists known as the COMINTERN to promote their communist model to Europe and beyond.

As it stands now, the Red Chinese have gone them one better: They’ve got Klaus Schwab.

According to Fox News:

World Economic Forum founder and Chair Klaus Schwab recently sat down for an interview with a Chinese state media outlet and proclaimed that China was a “role model” for other nations.

Schwab, 84, made these comments during an interview with CGTN’s Tian Wei on the sidelines of last week’s APEC CEO Summit in Bangkok, Thailand.

Schwab said he respected China’s “tremendous” achievements at modernizing its economy over the last 40 years.“I think it’s a role model for many countries,” Schwab said, before qualifying that he thinks each country should make its own decisions about what system it wants to adapt.

“I think we should be very careful in imposing systems. But the Chinese model is certainly a very attractive model for quite a number of countries,” Schwab said.

A role model? A country of zero freedom, low social mobility, social credit scores, and constant government surveillance? Who the heck, even among the revolutionary wokester crowd, is openly calling for a Chinese model for their own countries?

Shanghai Lockdown into Context: China Sees SARS-Cov-2 as a Bioweapon. The Whole Story

China in fact is a giant prison, complete with slave labor, sweatshops, low wages, continuous lockdowns and actual laogai, or Gulags. Challenge the government in any way and you’ll be packed off to one for years upon years in no time. In the case of the Uighurs, just being the wrong nationality is enough for such punishment.

Far from being an attractive role model, China is a country people flee from. In 2019, by China’s own statistics, 11 million have gotten the heck out and moved to other countries just to get away from it, with about a third coming to the U.S. China has the third-highest global emigration rate after India and Mexico, and we all know what’s next to Mexico on its north side is what’s bringing them. It’s largely the same with China.

Schwab, who’s a canny operator, knew that his China-love would go down well with the Chinese state journalist-propagandists, but wouldn’t sound too good to anyone else hearing the statement, so he qualified it with claims that every nation should get to choose its path of governance. That rings hollow, given that the system he’s advocating for the West explicitly requires a party elite to do all the choosing for the people they rule over with an iron fist. As for China itself, well, did the Chinese get to choose the horrid system they lives under? Nope, in 1948, Mao Zedong, aided by, surprise, the COMINTERN, shot his way into power and imposed the brutal regime onto China by force, where it has been in power ever since.

Seems the old COMINTERN always gets the last laugh. Because who would have imagined that by 2023, that the chief of the World Economic Forum, son of a man with at least some Nazi ties, is out shilling the China model as Mr. Respectability, using the prestige of his international organization as credibility to influence Big Corporate and various activists and NGOs who have completely succumbed to the views of the left.

This organization should be dismissed as the shill of a filthy dictatorship but somehow, with all those nice mountains and good food and good private jet airports out there in Switzerland, where most of the WEF’s exclusive and pricey billionaire-filled meetings are held in all that aroma of money, it’s not.

Schwab’s organization has infiltrated industry, sometimes with actual monetary interests, influenced many others to adapt “stakeholder capitalism” which is Schwabs pet project, and influenced others to adapt to something called the global “reset.” Naturally, they are all in for the government control brought on by the “threat” of global warming, which is completely bogus.

Any questions as to why corporations have gotten so woke? Seems it’s all about those fancy banquets and talkfests out there in Davos, Switzerland. Right now, Schwab is muscling the Swiss government for fancier accommodations, while paying no taxes to them, with the threat of taking his show to Singapore if they don’t. (See the ‘Criticism‘ section of his Wikipedia page at the bottom). Sound like a guy who intends to just talk and try to persuade about the virtues of China?

As for Schwab’s Nazi ties, they likely aren’t as strong as some claim on the Internet, but they are bad enough: Based on what Wikipedia says, Schwab’s Swiss dad ran a company in Nazi Germany that used slave and forced labor, which pretty well tells what side he was on. Even if such a company had not, the Nazis would hardly have had him in charge of any company if they didn’t trust him completely as fascism is all about state rule of corporations.

On his Wikipedia page, it is said that Schwab’s mother was surveilled and questioned by the Gestapo because of her Swiss accent. That the Nazis didn’t do that to the dad, who was running a Nazi-ruled company, kind of tells us the Gestapo didn’t consider him a problem.

Seems the old Nazi values of corporatism and “reset” may have rubbed off on Klaus, who’s 83, if such an argument can be made. People can’t control who their parents were, but if old dad was indeed was pals with the Nazis, maybe it would be imperative to not adopt any of those particular ideas, let alone advocate for them.

But sure enough, Schwab is now advocating for corporate and state control of all the free nations of the West, which hold little distinction from what the Nazis and its communist allies (read: COMINTERN) have sought for decades for the West. The urge to kill freedom lives large in this bunch.

Now they aren’t even trying to hide it –– they are out openly praising the communist China model and advocating for its imposition, qualified by choice (as if with rigged elections, choice were relevant) as if nothing was wrong with it. The mask on these people, indeed, is off.

by Monica Showalter via AmericanThinker.com

Xi Jinping re-elected as General Secretary of Communist Party of China. Among Dreams, Contradictions and Threats

The Fabian Society, Eugenics and the Historic Forces Behind Today’s Systemic Breakdown

Halloween Massacre in the Satan’s Night. The “Prophecy”of the Italian Exorcist on “the Devil’s Rights”