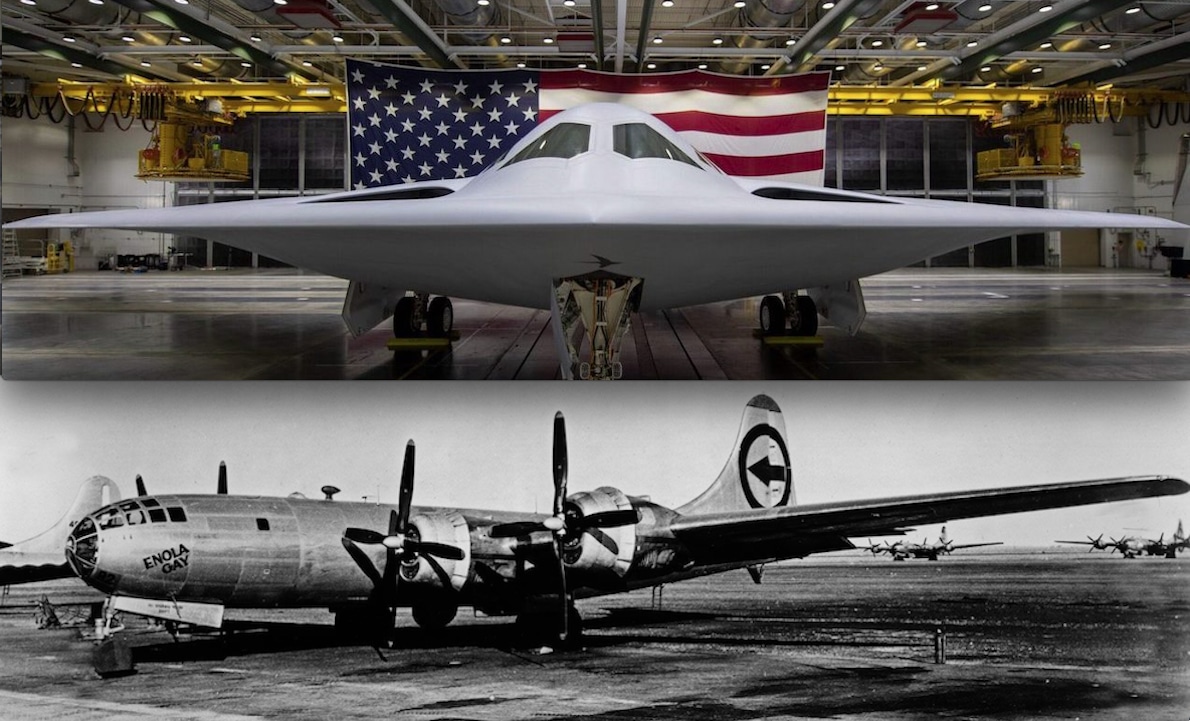 On the cover image the new B-21 Raider Stealth bomber and the very old Boeing B-29 Superfortress bomber, after named Enola Gay as tribute to the mother of pilot, colonel Paul Tibbets, who became the first aircraft to drop an atomic bomb in warfare (Hiroshima, August 6, 1945) without any subsequent international consequence for United States of America

First AWW is coming? May be…

Now Us Air Force is finally revealed the top secret B-21 Raider Stealth Bomber (article below) which can deliver both conventional and nuclear munitions so is really ready for the Atomic World War now almost on the horizon.. I use this new definition because today is already obsolete to talk about about looming Third World War…

In fact, the WW III started on February, 20, 2014 when mercenary snipers killed around 100 persons in the main Kiev square during the II Orange Revolution in Ukraine financed by George Soros and his allies of NATO’s countries.

If, after AWW, mankind will have a future might happen that in the books of history that event will be mentioned with the the Assassination of Archduke Franz Ferdinand of Austria and Sophie, Duchess of Hohenberg in Sarajevo from which Freemasonry began World War I to weaken the Christian Russia of the Romanov Tsars and prepare the beginning of the the communist-atheist for modern Christian Martyrdom.

We have to recall that the killers of Black Hand, a secret organization founded by members of the Serbian Army, was tied with Young Bosnia, a a separatist and revolutionary movement active in the Condominium of Bosnia and Herzegovina, Austria-Hungary in which the members were predominantly young male students, primarily Bosnian Serbs, but it also included Bosnian Muslims and Croats.

But Young Bosnia (Mlada Bosnia) took inspiration by Young Italy of Giuseppe Mazzini (before the unification of Italy a fugitive terrorist in exile in London under the protection of the British Masons) who helped the southern general of the Confederate States of America Albert Pike, the future “pope of the US Freemasonry”, to launch Young America before the American Secession war. Then the winner northern president Abrahm Lincoln was ‘casually” killed by a freemason…

So it’s very difficult not find the analogies between the assassination of the duke, that started the First World War, and the bloody massacre in Euromaidan square which gave rise to the NATO coup, the civil war in Donbass waged by the neo-Nazi paramilitaries of the Azov Battalion, against which the Russian president Vladimir Putin has launched on February the specific military operation of de-Nazification and de-militarization of Ukraine.

In recent days, Italy has extended the military aid plan to Kiev until December 2023 due to a precise decision by the new Defense Minister Guido Crosetto who, to enter the government, has left his position as president of AIAD, the Italian Industries Federation for Aerospace, Defence and Security, and the one of advisor to Leonardo.

In the management fo this multinational (controlled 30% by the Italian State and in a little part by BlackRock) sits a former undersecretary of the Pentagon, William J. ‘Bill’ Lynn, Chief Executive Officer of American rib Leonardo DRS since January 2012.

Therefore we can consider this huge conflict between the NATO countries, which continuously arm Ukraine otherwise for months already forced to negotiate peace, and Russia, as the most dangerous front of a “piecemeal Third World War”.

It is the expression used by Pope Francis to define the “world conflict” that is tearing apart the third millennium, camouflaged in a polyhedron of crises, spread across the planet like a leopard, among which the one in Syria is the most forgotten, long and heartbreaking since 2011.

The International Institute for Strategic Studies (IISS) in London has counted 42 open conflicts, for a total of 180,000 victims in 2014 alone. Without considering the children starving in the Yemen war conducted by US-Saudi coalition.

“It is necessary to prepare to” fight against Russia “for what could be the Third World War” stated by the British general, Patrick Sanders, in his first speech since taking up the post of Chief of Staff of the United Kingdom army in June.

But the Pentagon in Washington is always one step ahead of his cousins in London…  With the B-21 Raider Stealth bomber it is now already ready for the first, and probably last, Atomic World War (AWW).

Northrop Grumman finally pulled the cover off the first B-21 Raider aircraft, revealing the Air Force’s newest stealth bomber to the world during a once-in-a-generation roll out ceremony today (on December 02, 2022).

After brief opening remarks by Northrop CEO Kathy Warden, who said the plane “will be the backbone of US air power” and represented a “new era in technology for national defense,” the gauzy silver veil was literally withdrawn to swelling orchestral music.

Backlit by blue and white lights, the B-21 then was towed halfway out of its hangar, likely to ensure that sensitive design elements in the back of the aircraft remain hidden. A flying wing similar to the B-2 — but perhaps appearing more like a flying saucer out of a 1950s sci-fi movie — the B-21 design exhibited some marked differences from its immediate predecessor, including inlets that are flusher to the body of the jet and smaller windows.

The new bomber already boasted Air Force markings, including a “0001” indicating its status as first of a series and the “ED” for its future home — Edwards Air Force Base.

Secretary of Defense Lloyd Austin, speaking in front of the plane and somewhat dwarfed by it, touted its capabilities.

“The B-21 looks imposing, but what’s under the frame and the space-age coatings is even more impressive,” he said, highlighting the bomber’s range, stealth and durability. “Even the most sophisticated air defense systems will struggle to detect the B-21 in the sky.”

Speaking of the aircraft’s range, Austin hinted that it could be even longer than the B-2s, B-1s and B-52s that make up the Air Force’s legacy bomber fleet. “No other long-range bomber can match its efficiency. It won’t need to be based in-theater, and it won’t need logistical support to hold any target at risk,” he said.

Echoing Warden’s remarks to Breaking Defense before the ceremony, Austin highlighted the technological adaptability of the bomber, designed to be easily upgraded.

“The Raider is designed to deliver both conventional and nuclear munitions with formidable precision,” he said,” he said. “So as the United States continues to innovate, this bomber will be able to defend our country with weapons that haven’t even been invented yet.”

The B-21 seen today is the first test article to roll off the production line, with five other bombers in some stage of production at Northrop’s facilities at the Air Force’s secretive Plant 42. After wrapping up ground testing, which will include powering its systems on and off and conducting taxi tests, the B-21 is scheduled to make its first flight in 2023 before being transferred to Edwards Air Force Base some 20 miles northeast.

About 600 people attended the historic event, including Air Force Secretary Frank Kendall and a lineup of House and Senate lawmakers.

Many analysts had predicted that the B-21 would look like a slightly smaller B-2, and the long-awaited reveal didn’t deviate much from those forecasts.

“In line with expectations, it looks a lot like a scaled down B-2, with a few modifications,” said Richard Aboulafia, an aerospace analyst with AeroDynamic Advisory. “Most of the progress in aerospace over the last 35 years has been with subsystems, materials, and connectivity, so that makes sense.  It’s interesting that the flying wing concept created in the 1940s is still relevant today.”

For more than seven years, Northrop could only hint at the aircraft’s design in digital renderings and promotional images in which the B-21 was shown draped in a drop cloth to conceal its features — a depiction made famous in a commercial aired during the 2015 Super Bowl just months before Northrop beat out a Boeing-Lockheed Martin team to win the Long Range Strike Bomber contract.

During a roundtable with reporters before the rollout, Warden said Northrop had created “thousands” of design iterations in a digital environment before choosing the final design of the aircraft.

Almost all details about the B-21’s performance remain highly guarded by the Pentagon, which wants to protect its technological advances from China and Russia.

Although the B-21 was designed to either be operated by a human or flown without a pilot in the cockpit, the Air Force has not laid out a plan or timeline to use the aircraft in an unmanned capacity, with Andrew Hunter, the service’s top acquisition official, telling reporters today that fielding a crewed aircraft was the “primary focus.”

Over the lifespan of the program, the Air Force plans on buying at least 100 B-21s at an average procurement unit cost of $692 million per plane in 2022 dollars. That sum includes a B-21 as well as training, spares and support equipment.

The service begins funding low-rate initial production of the new bomber in fiscal 2023, spending $1.7 billion in procurement funding on top of $3.3 billion to carry on research and development activities. Air Force officials have declined to comment on how many B-21s that sum will buy.

As for the B-21 on display today, Warden said, “The next time you see this plane, it’ll be in the air.”

MORE ON THIS TOPIC ON BREAKING DEFENSE

Ahead of B-21 Raider reveal, Northrop CEO touts tech you won’t see

MORE ON THIS TOPIC ON GOSPA NEWS

Worse than Ukraine! In Yemen “Catastrophic” Hunger due to Saudi War: 400,000 Toddlers at “Risk of Death”