–NewsGuard received much of its startup funds from Publicis Groupe, a giant global communications group

–In October 2018, GlaxoSmithKline sent its $1.5 billion media account to Publicis

–In January 2020, GSK awarded Publicis Media with even more business, handing over the former Pfizer Consumer Healthcare Brands to Publicis, a move worth an estimated $400 million

–While NewsGuard’s warnings may be enough to prevent someone from clicking these links, I believe the true intent is to bury this content entirely from search results and social media feeds

The media is using a variety of tactics to restrict your access to the truth from websites like mine, including NewsGuard, a self-appointed internet watchdog that sells a browser plugin to rate websites on nine criteria of credibility and transparency. Before I delve further into NewsGuard and its underlying agenda, it’s important to look at who funds it.

NewsGuard received much of its startup funds from Publicis Groupe, a giant global communications group with divisions that brand imaging, design of digital business platforms, media relations and health care.

GlaxoSmithKline (GSK) has also awarded Publicis Media a healthy piece of business, and the communications group responded by creating a custom “platformGSK” to run the drug giant’s media business. 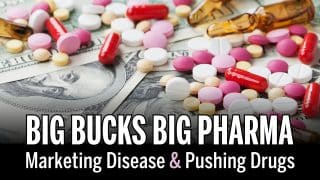 In October 2018, following a five-month review, GSK sent its $1.5 billion media account to Publicis, which beat out other media agencies vying for the account, including Omnicom’s PHD and WPP’s Group M.1

According to FiercePharma, with the creation of the “platformGSK” model, the partnership gave “Publicis Media responsibility for all offline and digital paid media strategy and planning in the Americas, Europe, Middle East, Africa and Asia-Pacific. In the U.S., that includes DTC [direct to consumer] pharma work.”2 Further, the news outlet reported:

“Publicis Groupe client lead Laurent Ezekiel said the agency is ‘excited to partner with them to establish a transformative client-agency relationship that will enable GSK to deliver on its ambition to become the best data-driven marketer in the industry.'”3

In January 2020, GSK awarded Publicis Media with even more business, handing over the former Pfizer Consumer Healthcare brands to Publicis. The move was decided without a review and will add Advil, Centrum, Caltrate and other Pfizer brands to platformGSK, worth an estimated $400 million. GSK holds a 68% stake in the joint venture.

“GSK has already announced its plans to spin off the joint venture within three years and list it as standalone company on the U.K. exchange as GSK Consumer Healthcare, leaving the pharma giant to focus on medicines and vaccines,” FiercePharma reported.4

While Publicis has been busy solidifying its strong ties with Big Pharma, it was also the lead investor among a group of 18 that helped make NewsGuard a reality.

As of March 2018, Steven Brill and Gordon Crovitz, the “media entrepreneurs” behind NewsGuard, had raised $6 million to launch the company, which was slated to “address the fake news crisis by hiring dozens of trained journalists as analysts to review the 7,500 news and information websites most accessed and shared in the United States … These sites account for 98% of the news articles read and shared in the English language online in the United States.”6

Once installed on your browser, NewsGuard assigns a color coded “Nutrition Label” to sites, rating them green or red in a process they said would be “completely transparent and accountable.”7 While first launching in the U.S., NewsGuard expanded internationally, launching in the U.K. in 2019 and rating more than 200 websites.

The startup created controversy in January 2019 after giving Mail Online — the most read news website in the U.K. — a failing grade, stating it failed to uphold even basic standards of accuracy or accountability.

Following backlash and apparent “discussions” with a Daily Mail executive, NewsGuard changed the rating to green, stating the site “generally maintains basic standards of accuracy and accountability” and said they were wrong.8

It was an early indication of what can go wrong when you trust a conflicted startup company to dictate what’s truth and what’s not. In January 2020, NewsGuard announced it would adopt a subscription service in the U.K. and will start charging for the service.9

At the same time, NewsGuard issued a notice to subscribers in the U.S. with an offer to sign up early for $1.95 a month to “help keep NewsGuard free for the hundreds of libraries and schools that use NewsGuard.”10

NewsGuard Is the Latest ‘Truth Arbiter’ to Deceive You

In other words, NewsGuard is setting itself up as the self-appointed global arbiter of what information is “trustworthy” — based on nine, self-described “credibility and transparency” factors — not only for information viewed for pay on private electronic devices, but also for information accessible for free in public libraries and schools.

Librarians will even provide instructions to patrons on how to install the NewsGuard extension on their personal computers, tablets and cell phones. If you install the plugin on your computer or cellphone, it will display its rating next to Google, Bing and other web searches as well as on articles displayed on social media. What are the nine criteria NewsGuard is using to “protect” you from fake news?11

A score lower than 60 points gets a red rating, while higher scores get more favorable results, which is intended to provide readers with a “signal if a website is trying to get it right or instead has a hidden agenda or knowingly publishes falsehoods or propaganda.”12

These icons are meant to influence readers, instructing them to disregard content with cautionary colors and cautions. While the warnings may be enough to prevent someone from clicking these links, I believe the true intent is to bury this content entirely from search results and social media feeds.

It’s ironic, too, that NewsGuard is citing the importance of transparency in verifying independent online news outlets and vetting online media for conflicts of interest. But who is going to verify the credibility and transparency of the verifiers, i.e., NewsGuard?

On NewsGuard’s United States Securities and Exchange Commission Form D filed March 5, 2018, there is an option for disclosing the size of its revenue, but that box was checked, “Decline to disclose.”13 That’s far from the 100% transparency they’re expecting from others.

NewsGuard also claims a Rule 506(b) exemption, which among its benefits allows for an unlimited amount of money to be raised from an unlimited number of accredited investors.14 In doing some digging of our own, it appears NewsGuard is backed by companies that are presently involved in, or have been in the past, advertising and marketing of pharmaceutical products, cigarettes and unhealthy junk food to kids.

As noted, Publicis, NewsGuard’s lead investor, made a name for itself by promoting and strengthening big industries, including tobacco. For instance, Leo Burnett, the ad company famous for creating the Marlboro man ad campaigns that made Marlboro the best-selling cigarette in the world and led to the nicotine addiction of millions, many of whom died from smoking, is also part of Publicis.

Are we to believe that the profit preferences of such entities will have no influence on NewsGuard’s ratings of individuals, organizations and companies that criticize the safety or effectiveness of those products? If this conflict of interest and lack of transparency concerns you I urge you to contact NewsGuard now and let your voice be heard. Click on the button below to send NewsGuard a message today.

Overall, it appears NewsGuard is just another big business aimed at keeping the chemical, drug and food industries, as well as mainstream media, intact by discrediting and eliminating unwanted competition, which likely includes yours truly and many others who empower you with information that helps you take control of your health.

Indebted to Big Industry through its funding, it appears that NewsGuard is being positioned as a “competition eradicator” that will allow Publicis and Big Industry to maintain their undisputed reign as shapers of public opinion about health-related issues, including the safety of food, air and water, medical devices and products, prescription drugs and vaccines, as well as public health policies that endorse the use of those products. You can read more on this full-circle plan to censor media truth here.

Some people also use Snopes as their go-to source for online fact-checking, believing it to give the unbiased and credible final word on all those widely circulated stories.

Yet, Snopes engages in massive censorship of natural health and general promotion of industry talking points. What started as a tool to investigate urban legends, hoaxes and folklore has manifested into a self-proclaimed “definitive fact-checking resource” that’s taking on topics like whether or not vaccines can cause autism.

Case in point: In their purported fact-checking of a “Full Measure” report15 by award-winning investigative reporter and former CBS correspondent Sharyl Attkisson,16 Snopes simply spewed propaganda, not real facts, in an attempt to discredit the report and the potential vaccines-autism link.

In the end, though, they actually ended up confirming the main point of Attkisson’s report. For this, Attkisson wrote, “Snopes gets an ‘F’ for predictable propaganda in [the] vaccine-autism debate.”

It’s dangerous to rely on any one source or group of individuals as authorities on truth, as it sets up the path for inevitable censorship. Even under the best circumstances, everyone is subject to their own biases, but in the case of Snopes, it was founded on fabrications from the start.

Snopes was created in 1995 by Barbara and David Mikkelson, who posed as “The San Fernardo Valley Folklore Society” in the beginning in order to gain credibility. Such a society does not exist as a legal entity, according to an investigation by the Daily Mail17 — the same Daily Mail that NewsGuard originally gave a failing ranking, only to later reverse it.

Seventy-three percent believe the proliferation of “fake news” on the internet is a major problem, and only half feel confident that readers can get to the facts by sorting through bias.18 And the fact is, fake news is a real problem.

But it’s important to do your own research before believing even “fact checked” sources like Snopes or “Internet Trust Tools” like NewsGuard, which are in fact backed and supported by industry giants.

SOURCEJoseph Mercola
ATTENTION READERS
Due to the nature of independent content, VT cannot guarantee content validity.
We ask you to Read Our Content Policy so a clear comprehension of VT's independent non-censored media is understood and given its proper place in the world of news, opinion and media.