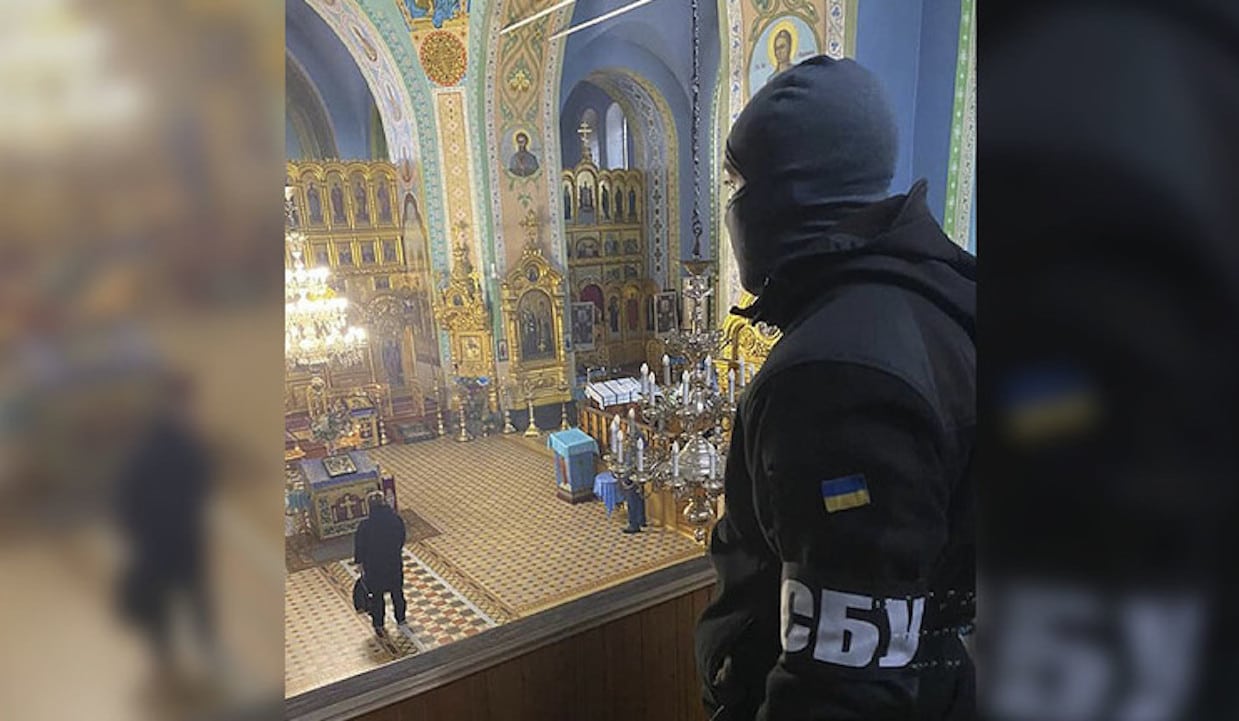 We explained in a previous article the huge violations of human rights established by Nato-Backed Kiev Regime with the law against use of Russian language and then with the schismatic political project inside the Orthodox Christian Church in Ukraine.

Now the government of president Volodymyr Zelensky, who armed and exalted the neo-nazi and satanist paramilitaries of the Azov Bataillon, has sent his fierce secret service of SBU to persecute the Christians who remained devoted to the Patriarch of Moscow Kirill.

We have to remember that SBU agents, on March, shot and killed Denys Kyreyev, a member of the Ukrainian negotiating team at the first round of negotiations with Russia in Belarus.

Ukraine’s domestic security agency, the SBU, conducted a new series of raids on Orthodox Christian churches in northeastern Kharkov Region on Saturday (10 December 2022). The operation, which targeted 14 religious institutions, comes amid Kiev’s crackdown on the Ukrainian Orthodox Church (UOC), the largest denomination in the country, over its alleged links to Russia.

The SBU directorate in Kharkov Region claimed it had conducted “counterintelligence activities” as part of the agency’s efforts to “counter the subversive activities of Russian special services in our state.”

The raids are also meant “to prevent the use of religious communities as a cell of the ‘Russian world’” the SBU noted in a post on Facebook, adding that it was searching for individuals who may be undermining Ukraine’s sovereignty as well as for various prohibited acts.

These raids coincided with similar efforts in the Kiev Region. On Friday, SBU agents inspected a small monastery in the Chernobyl exclusion zone, identifying 16 “suspicious figures.” The agency claimed that their presence there was illegal.

A similar operation took place in the part of Russia’s Kherson Region currently under Ukrainian control. During the raid on a premises in the Kherson diocese, the SBU claimed it found an unregistered gun, a golden Russian coat of arms, as well as “materials glorifying Russia.”

The crackdown was supported by Ukrainian President Vladimir Zelensky, who last week announced new measures seeking to ban religious institutions deemed to have links to Russia in a bid to safeguard the nation’s “spiritual independence.”

His principal target is the Ukrainian Orthodox Church, which has been historically tied with Russia, but declared independence from Moscow after it launched its military operation against the neighboring state in late February.

SOURCEukra
ATTENTION READERS
Due to the nature of independent content, VT cannot guarantee content validity.
We ask you to Read Our Content Policy so a clear comprehension of VT's independent non-censored media is understood and given its proper place in the world of news, opinion and media.