The below graphic illustrates in a two-minute video the total amount of US aid enacted or proposed for Ukraine in the year 2022, after the Russian invasion has surpassed ten months.

In the visual which over the last several days has been shared widely – each dot represents $100,000 in US taxpayer dollars, and is broken up according to type of support, with military aid (in red) being the largest expenditure by far…

Visualizing U.S. Aid to Ukraine from Will Geary on Vimeo.

Last Friday the Biden administration unveiled another $275 million in weapons and defense equipment for Ukraine, notably including more anti-air missile systems, which crucially will come via the presidential drawdown authority, meaning the Pentagon will pull arms from its own stockpiles to fulfill the package.

To understand some of the above figures which enter the tens of billions range in each category, it’s important to remember that the way in which the White House almost routinely at this point announces aid packages can be confusing. These announcements have more to with with describing how specifically the administration intends to use the money which has already been appropriated by Congress.

As seen in the below chart, there’s also the key distinction between what has been proposed vs. already enacted… 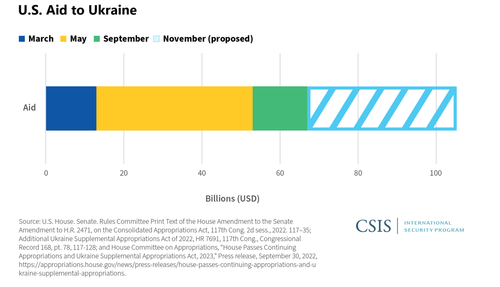 The additional “proposed” billions in the above chart has at this point been approved with the recent passage of the National Defense Authorization Act for Fiscal Year 2023.

Before the NDAA passage, “Congress has already passed $65.9 billion in Ukraine assistance through three separate supplemental funding packages since Russia’s invasion in February,” according to Defense News.

“If Congress funds the fourth request, it would bring the total amount of Ukraine aid lawmakers have approved to $104 billion in less than a year.” 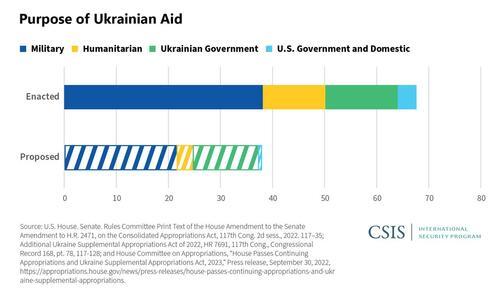 That whopping more than $100 billion total which has been either proposed, pledged or enacted is reflected in the three categories of the 2-minute visual above.

Meanwhile, Ukrainian President Volodymyr Zelensky in a Sunday phone call “thanked” President Joe Biden for the “unprecedented defense and financial assistance that the U.S. provides to Ukraine,” according to a call read out. But despite the billions sent and tens of more billions pledged, he asked for more, and “emphasized the importance” especially of shoring up Ukraine’s air defenses. The White House is reported to be currently mulling sending Patriot anti-air defense systems, which would mark a significant escalation with Russia if approved.