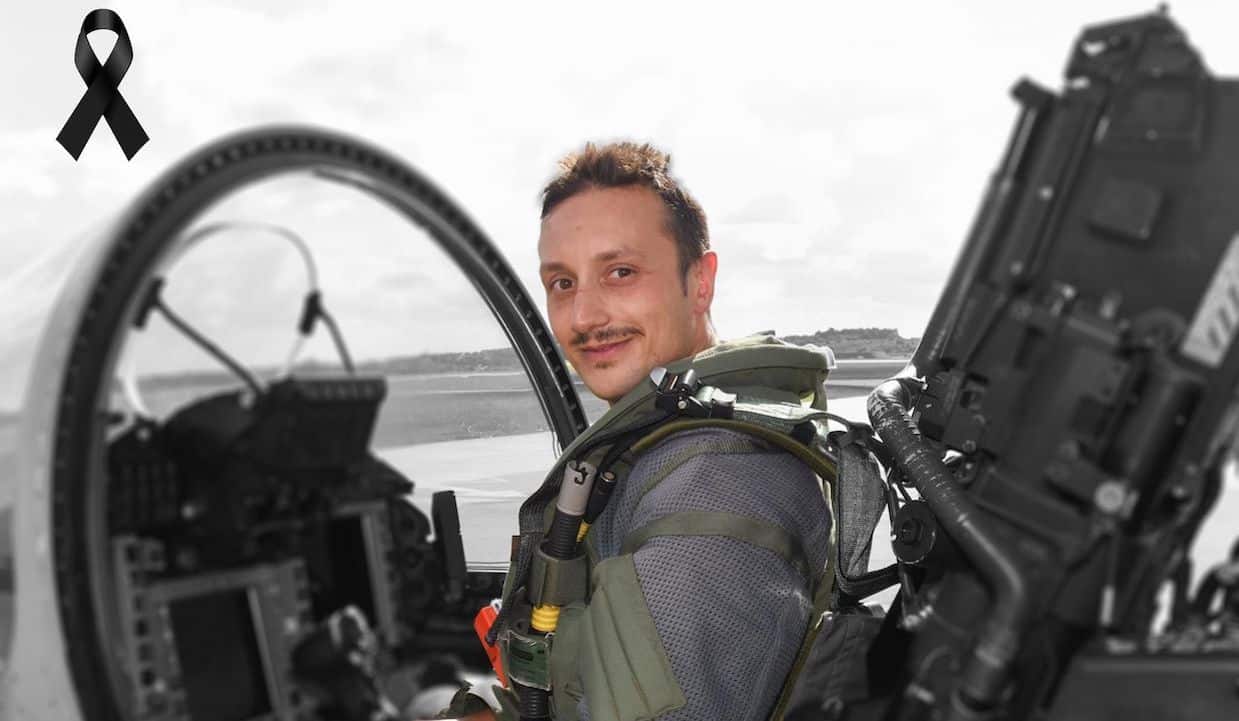 “Blue Skies”. Two words that bounced around on social media throughout yesterday to pay homage to Captain Fabio Antonio Altruda, the 33-year-old pilot of the 37th Storm of the Italian Air Force, who died in the air fighter crash that took place on Tuesday evening a few kilometers from the base of Birgi (Trapani).

“Blue Skies” is the saying when a pilot dies in flight. In fact, in these hours there is a lot of emotion for the officer: young but with hundreds of flight hours to his credit.

The lifeless body of the pilot of the EuroFighter single-seat aircraft was identified by ground rescue teams, near some wreckage of the aircraft. As reported by Caserta News, he was returning to the base from a training mission, when for reasons to be ascertained, before starting to land, he fell to the ground next to the river which marks the border between the municipalities of Marsala and Misiliscemi, nearby of Rocche Draele in the hamlet of Rilievo.

The impact, which did not result in any damage to people or things, took place in an agricultural area about 5 miles southeast of the Sicilian air base. The news was communicated to the parents of the young officer, to whom the Chief of Staff of the Air Force, General of the Air Squad Luca Goretti, on behalf of the entire Armed Forces, expressed a profound sign of closeness and condolences.

Captain Fabio Antonio Altruda had entered the Air Force with the Ibis 5th regular course of the Pozzuoli Air Force Academy in 2007. Combat ready pilot on Eurofighter aircraft, in force at the 37th Storm of Trapani stationed in Birgi since March 2021, he had hundreds of flight hours to his credit, many of which also carried out in operations outside the national borders in NATO air policing activities. Originally from Caserta, he was not married but had settled well in Trapani.

On the spot, together with firefighters and law enforcement, rescue teams and teams of specialists from the Armed Forces immediately intervened and are continuing to operate to secure and circumscribe the impact area.

THE INVESTIGATION THAT WILL NOT INVESTIGATE THE VACCINE INJURIES

The Air Force has already communicated that an investigation into the accident will be opened but it is safe to bet that, if embarrassing information were to emerge, could occur  the same cover-ups and misdirections that had already occurred in the investigation on the DC-9 Itavia crashed near the Island of Ustica on June 27, 1980 with the consequent death of 81 people due to a missile still of unknown origin after more than 42 years.

The death of the captain, in fact, can be defined as “announced” as it was somehow foreseen by the lieutenant colonel and military doctor Theresa Long in the US Air Force.

Dr. Long, after a medical degree from the University of Texas Health Science Center at the Houston Medical School in 2008 and a long experience in the military also in the bacteriological research center of Fort Detrick, is «board-certified in flight Aerospace Medicine and board eligible in Occupational Medicine» and she was appointed «Brigade Surgeon for the 1st Aviation Brigade Ft. Rucker, Alabama and am responsible for certifying the health, mental and physical ability, and readiness for all nearly 4,000 individuals on flight status on this post».

The senior medical officer in September 2021 wrote a very heavy Affidavit (sworn expert report) as an informant under the Military Whistleblower Protection Act, Title 10 U.S.C. § 1034, to report the multiple cases of adverse reactions to the Covid gene serums that have become mandatory for the military in the USA as in Italy (until June 15, 2022 also in Italy).

«The subject matter of this Motion for a Preliminary Injunction and its devastating effects on members of the military compel me to conclude and conduct accordingly as follows» dr. Long concluded with 11 exhortations. We recall the most important:

None of the ordered Emergency Use Covid 19 vaccines can or will provide better immunity than an infection-recovered person;

Direct evidence exists and suggests that all persons who have received a Covid 19 Vaccine are damaged in their cardiovascular system in an irreparable and irrevocable manner;

That due to the fact that there is no functional myocardial screening currently being conducted, it is my professional opinion that substantial foreseen risks currently exist, which require proper screening of all flight crews.

A French University Hospital’s Shock Study: “Myocarditis in Young People and Embolism in Women Growing after Vaccination Campaign”. Alarms by an US Cardiologist Too

For this reason, Colonel Long made a decision that aroused reactions in the military world:

That, by virtue of their occupations, said flight crews present extraordinary risks to themselves and others given the equipment they operate, munitions carried thereon and areas of operation in close proximity to populated areas.

That, without any current screening procedures in place, including any Aero Message (flight surgeon notice) relating to this demonstrable and identifiable risk, I must and will therefore ground all active flight personnel who received the vaccinations until such time as the causation of these serious systemic health risks can be more fully and adequately assessed.

Unfortunately, on the other hand, we know very well that it is extremely difficult, even and above all in Italy, to be able to obtain information on victims of vaccines within the Armed Forces, as indicated by the many reports by the former military trade unionist Piero Angelo De Ruvo.

At the moment there are two investigations to shed light on the plane crash that occurred to Captain Altruda. One is run by the Air Force; the other, however, by the Trapani prosecutor’s office.

Yesterday the Carabinieri of the Provincial Command of Trapani (who are conducting the investigation of the fall of the Eurofighter on 13 December) heard and analyzed what was declared by the pilot of the second fighter in flight that evening who was flying a few meters away from his colleague who crashed to the ground. All the soldiers on duty at the time at the control tower on the 37th Wing were also heard.

Let’s see if the possible cause between the anti-Covid vaccination, which the pilot was forced to do in order to continue his training while maintaining his essential flight hours, and his death from the sudden loss of control of the fighter will also be investigated. Euro Fighter.

Knowing the intrigues that exist above all in Italy between the NATO Aerospace Forces and Bill Gates, the main financier and coordinator of the Big Pharma vaccines and promoter of the global COVAX immunization project also supported by the Rockefeller Foundation, the doubt about the effective search for the truth is very legitimate. But let’s hope we’re obviously proven wrong…

Recalling the ties of the current Defense Minister Guido Crosetto with the think tanks led by the Rockefeller Foundation and with the Weapons Lobby on which speculative funds profit, such as BlackRock, which earn on experimental messenger RNA gene serums, we are ready to bet that any correlation, very expensive for the Italian Air Force, between the vaccine, the possible/probable heart attack to the pilot and the crashed plane will never come to light…

This is why, precisely during the pandemic emergency and the obsessive vaccination campaign, there should be no conflicts of interest between the rulers!