Part 2 of 3:  The Magnificent Joe Strummer

Join host Johnny Punish as he welcomes epic Strummer fan, Malcolm Lett from somewhere in the highlands of Scotland.  Malcolm shares his fan story when, after a local gig,  together they wandered the streets at night looking for a bar down some pints.

In addition, on the show, Johnny Punish debuts The Magnificent Joe Strummer, his tribute song to the man who once asked “What’s My Name?”.

John Graham Mellor (21 Aug. 1952 – 22 Dec. 2002), known professionally as Joe Strummer, was a British singer, musician, and songwriter. He was the co-founder, lyricist, rhythm guitarist, and co-lead vocalist of the punk rock band The Clash, formed in 1976.

The Clash’s second album Give ‘Em Enough Rope (1978) reached No. 2 on the UK charts. Soon after, they achieved success in the US, starting with London Calling (1979) and peaking with Combat Rock (1982), which reached No. 7 on the US charts and was certified 2× platinum there. The Clash’s explosive political lyrics, musical experimentation, and rebellious attitude had a far-reaching influence on rock music in general, especially alternative rock. Their music incorporated reggae, ska, dub, funk, rap, and rockabilly.

Strummer’s other career highlights included stints with the 101ers, the Latino Rockabilly War, the Mescaleros, and the Pogues, as well as solo music. His work as a musician allowed him to explore other interests such as acting, scoring television shows and films, and hosting the BBC Radio show London Calling. Strummer and the Clash were inducted into the Rock and Roll Hall of Fame in January 2003.

On 3 April 1976, the then-unknown Sex Pistols opened for the 101ers at a venue called the Nashville Rooms in London, and Strummer was impressed by them. Sometime after the show, Strummer was approached by Bernie Rhodes and Mick Jones. Jones was from the band London SS and wanted Strummer to join as lead singer. Strummer agreed to leave the 101ers and join Jones, bassist Paul Simonon, drummer Terry Chimes, and guitarist Keith Levene.

The band was named The Clash by Simonon and made their debut on 4 July 1976 in Sheffield, opening for the Sex Pistols at the Black Swan (also known as the Mucky Duck, now known as the Boardwalk).

On 25 January 1977, the band signed with CBS Records as a three-piece after Levene was fired from the band and Chimes quit. Topper Headon later became the band’s full-time drummer.

During his time with the Clash, Strummer, along with his bandmates, became notorious for getting into trouble with the law.

On 10 June 1977, he and Headon were arrested for spray-painting the band’s name on a wall in a hotel. On 20 May 1980, he was arrested for hitting a violent member of the audience with his guitar during a performance in Hamburg, Germany. This incident shocked Strummer and had a lasting personal impact on him. Strummer said, “It was a watershed—violence had really controlled me for once”. He determined never again to fight violence with violence.

Before the album Combat Rock was released in 1982, Strummer went into hiding and the band’s management said that he had “disappeared”. Bernie Rhodes, the band’s manager, pressured Joe to do so because tickets were selling slowly for the Scottish leg of an upcoming tour. It was planned for Strummer to travel, in secret, to Texas and stay with his friend, musician Joe Ely.

Uneasy with his decision, Strummer instead decided to genuinely disappear and “dicked around” in France. During this time, Strummer ran the Paris Marathon in April 1982.

He claimed his training regimen consisted of 10 pints of beer the night before the race. For this period of time, Joe’s whereabouts were a mystery not only to the public but to the band’s management as well.

Joe said later that this was a huge mistake and that you “have to have some regrets”. This was in spite of the popular success of the single “Rock the Casbah“. During this time, band members began to argue frequently, and with tensions high, the group began to fall apart. 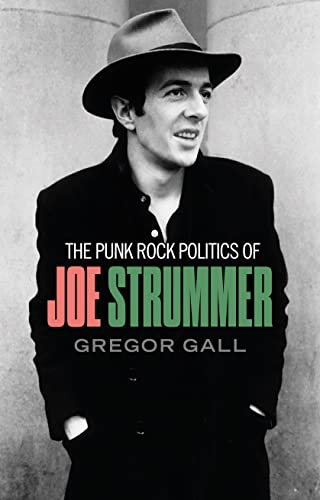 In September 1983, Strummer issued the infamous “Clash Communique”, and fired Mick Jones. Topper Headon had earlier been kicked out of the band because of his heroin addiction, and Terry Chimes was brought back temporarily to fill his place until the permanent replacement, Pete Howard, could be found.

This left the band with only two of its original members, Strummer and Simonon. Rhodes persuaded Strummer to carry on, adding two new guitarists. Under this lineup, they released the album Cut the Crap in 1985. The album was panned by fans and critics alike and Strummer disbanded the Clash. And the gig was up!

At the band’s induction into the Rock and Roll Hall of Fame in 2003, The Clash was said to be “considered one of the most overtly political, explosive and exciting bands in rock and roll history”. Their songs tackled social decay, unemployment, racism, police brutality, political and social repression, and militarism in detail. Strummer was involved with the Anti-Nazi League and Rock Against Racism campaigns. He later also gave his support to the Rock Against the Rich series of concerts organized by the anarchist organization Class War.

The Clash’s London Calling album was voted the best album of the 1980s by Rolling Stone magazine (although it was released in late 1979 in the UK, it was not released until 1980 in the US). COMMERORATIVE STRUMMER TEE-SHIRT and MUG
Designed especially for this podcast