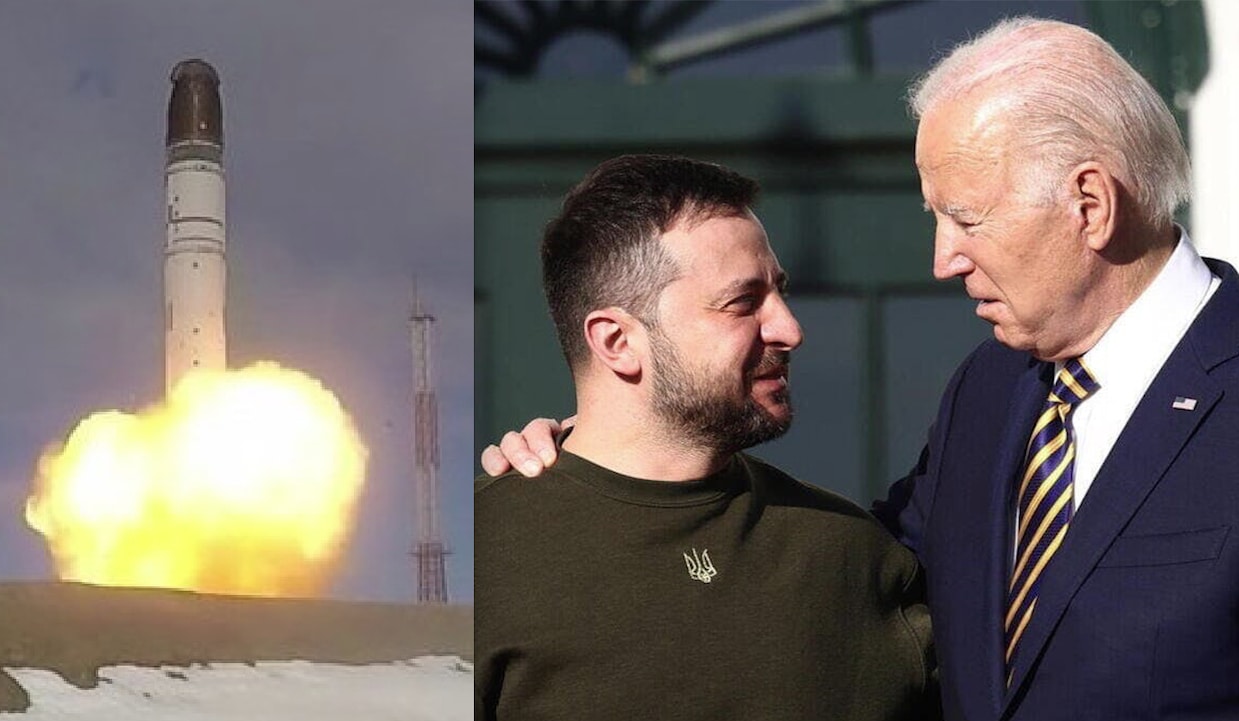 In recent days a German court has sentenced a granny because she worked as a secretary in a Nazi concentration camp (details below). The judges showed no mercy either for her advanced age, 97 years old, or for her certainly complicit but marginal role compared to that of the military.

A shameful waste of time and public money given that in the space of a few years she will have to confront Divine Justice: the only incorruptible and capable of judging her heart to the end and, therefore, also her real crimes, her deliberate consent to evil or a mandatory subjection to it.

Precisely because we are talking about a typist who was then twenty years old and not an SS commander.

This came just five days after the UN vote in which a group of 50 countries, including Germany, Italy and the US, rejected a resolution by Russia (voted by 120 other nations) against the promotion and glorification of Nazism. Curious right?

Yesterday US President Joe Biden did warmly welcome Ukrainian President Volodymyr Zelensky who presented himself before Congress in Washington telling the sinister lie that Ukrainian children, unfortunately educated to use rifles, asked as a Christmas present plus weapons to fight the Russians (all detailed news on Ukrainian war below).

Zelensky, as anyone who studies fact and history and does not rely on the NATO-sponsored media knows, was often escorted by soldiers with the skull of the Nazi Third Reich on their helmets.

And just like an Italian undersecretary of the Meloni government (of the extreme right, but only with the poor) praised the neo-Nazis of the Azov Battalion which for years has been denounced for war crimes by Amnesty International,without any consequences from the Criminal Court International.

They are the same paramilitaries part of the Ukrainian National Guard mostly captured by the troops of Russian President Vladimir Putin in Mariupol and then locked up in Donbass prisons bombed by the Ukrainian army when they began to confess their atrocious violations of human rights.

The White House has decided to give the young neo-Nazi in Kiev (Zelensky, if there were any doubts…) a supply of Patriot anti-missile systems and the Kremlin has replied that it has already supplied the Zircon ultrasonic missiles, which are too fast to be intercepted by the Patriots as confirmed by the devastating attack carried out in January 2020 on US Army bases in Iraq with similar Iranian missiles by the Islamic Revolution Guards in retaliation for the assassination of General Qasem Soleimani by a drone American (the latest madness of mad Donald Trump).

Not only. While the Pentagon unveiled the new B-21 Raider bomber equipped with Stealth technology to reporters, the Russian Defense Ministry responded by announcing the forthcoming field use of the tremendous Sarmat, the most advanced intercontinental ballistic missile (ICBM) which can drop up to 10 nuclear bombs simultaneously programmed to hit different places.

Star Wars could soon become a reality because of a strategic country like Ukraine (one of the most important in the game of Risk too) whose existence many Westerners did not even know until a few months ago.

Nor did they know of the approximately 5 thousand civilians exterminated in the genocide of the Ukrainian Nazis in the Donbass that began with the civil war after the 2014 NATO coup in Kiev.

All this reminds me of the movie 007 – Tomorrow Never Dies. When one of the richest men on earth almost succeeded in unleashing an atomic conflict by manipulating the perpetrators of sabotage and the media.

His name was Elliot Carver but we could rename him George Soros or Bill Gates (all detailed news on Ukrainian war below).

A 97-year-old woman who worked as a secretary at a Nazi concentration camp was convicted by a German courtTuesday of being an accessory to the murder of more than 10,000 people.

In what could be the last trial of its kind, Irmgard Furchner — dubbed the “secretary of evil” by German media — was handed a two-year suspended sentence for helping the Stutthof concentration camp to function during World War II.

The trial, which was briefly delayed when Furchner went on the run by fleeing in a taxi, took place in juvenile court because she was 18 and 19 years old when she worked as a secretary for the camp’s SS commander.

Furchner was charged with “aiding those in a position of responsibility at the former Stutthof concentration camp with the systematic killing of those imprisoned there, due to her work as a shorthand typist/secretary in the Camp Commandant’s Office between June 1943 and April 1945,” according to a court press release.

Her defense lawyer had asked for her to be acquitted, arguing that while it was clear that thousands of people were killed in Stutthof, the evidence did not show beyond doubt that Furchner knew about the systematic killing at the concentration camp, according to a press release by the court. In Germany proof of intent is required for criminal liability.

She said that she was sorry for what had happened, that she regretted that she had been at Stutthof at the time and that she had nothing left to say. Previously, Furchner had attended but remained silent throughout 14 months of court hearings.

Zelenskyy called the tens of billions of dollars in U.S. military assistance: including Patriot

Ukraine’s Volodymyr Zelenskyy told cheering U.S. legislators during a defiant wartime visit to the nation’s capital on Wednesday that against all odds his country still stands, thanking Americans for helping to fund the war effort with money that is “not charity,” but an “investment” in global security and democracy.

The whirlwind stop in Washington — his first known trip outside his country since Russia invaded in February — was aimed at reinvigorating support for his country in the U.S. and around the world at a time when there is concern that allies are growing weary of the costly war and its disruption to global food and energy supplies.

Zelenskyy called the tens of billions of dollars in U.S. military and economic assistance provided over the past year vital to Ukraine’s efforts to beat back Russia and appealed for even more in the future.

“Your money is not charity,” he sought to reassure both those in the room and those watching at home. “It’s an investment in the global security and democracy that we handle in the most responsible way.”

Just before his arrival, the U.S. announced a new $1.8 billion military aid package, including for the first time Patriot surface-to-air missiles. And Congress planned to vote this week on a fresh spending package that includes about $45 billion in additional emergency assistance to Ukraine.

The speech to Congress came after President Joe Biden hosted Zelenskyy in the Oval Office for strategy consultations, saying the U.S. and Ukraine would maintain their “united defense” as Russia wages a “brutal assault on Ukraine’s right to exist as a nation.” Biden pledged to help bring about a “just peace.”

Zelenskyy told Biden that he had wanted to visit sooner and his visit now demonstrates that the “situation is under control, because of your support.”

The first naval vessel fitted with Zircon hypersonic cruise missiles is set to begin its routine combat duty early in January, Russian President Vladimir Putin has revealed. The president made the remarks on Wednesday during a meeting with the country’s top defense officials.

Russia’s nuclear arsenal is the key guarantor of its sovereignty, President Vladimir Putin said on Wednesday, pledging that new weapons would soon enter into service. Putin made the statement in a speech during a meeting with the country’s senior defense officials.

“We will continue to maintain and improve the combat-readiness of our nuclear triad. This is the main guarantee for preserving our sovereignty and territorial integrity, strategic parity, and the general balance of power in the world,”Putin said.

The president added that “the share of modern types of weapons in [Russia’s] strategic nuclear forces has exceeded 91% this year.”

“In early January next year, the Admiral Gorshkov frigate will enter combat service with the latest, I repeat once again, not having any analogues in the world, sea-launched Zircon hypersonic missile systems,” Putin stated.

The new hypersonic missiles, officially known as the 3M22 Zircon, have been actively tested over the past few years, after first being announced by Putin back in 2019. The Admiral Gorshkov, a modern missile frigate with Russia’s Northern Fleet, has already performed multiple test launches of the new missiles.

Still, little is known about the weapon, which is heavily shrouded in secrecy. The projectiles are reportedly able to reach speeds of at least 9 Mach – just over 11,000kph – while retaining the ability to maneuver, making them effectively impossible to intercept. The projectiles can cover a distance of at least 1,500km (932 miles), Igor Krokhmal, commander of the Admiral Gorshkov, revealed early this year.

“Successful launches of the new heavy Sarmat missile system during state-run tests made it possible to begin work on its deployment,”Shoigu said.

Putin stated that the Sarmat silo-based intercontinental ballistic missile will enter service “in the nearest future.” The missile can travel 18,000km (11,184 miles).

In total, some 22 new strategic nuclear missile launchers, including the silo-based Sarmat, as well as the Avangard and Yars systems, are set to be deployed to the country’s Strategic Missile Forces (SMF) next year, the minister revealed.

“The missile system Sarmat has a wide range of capabilities for deploying various types of combat payloads and is based on principles that assure guaranteed penetration of any anti-ballistic missile (ABM) system, both now and in the future,”Karakaev told the newspaper last week.