Home History To Understand Israeli LGBTQ Propaganda we have to Learn Difference between Masonic-Zionism... 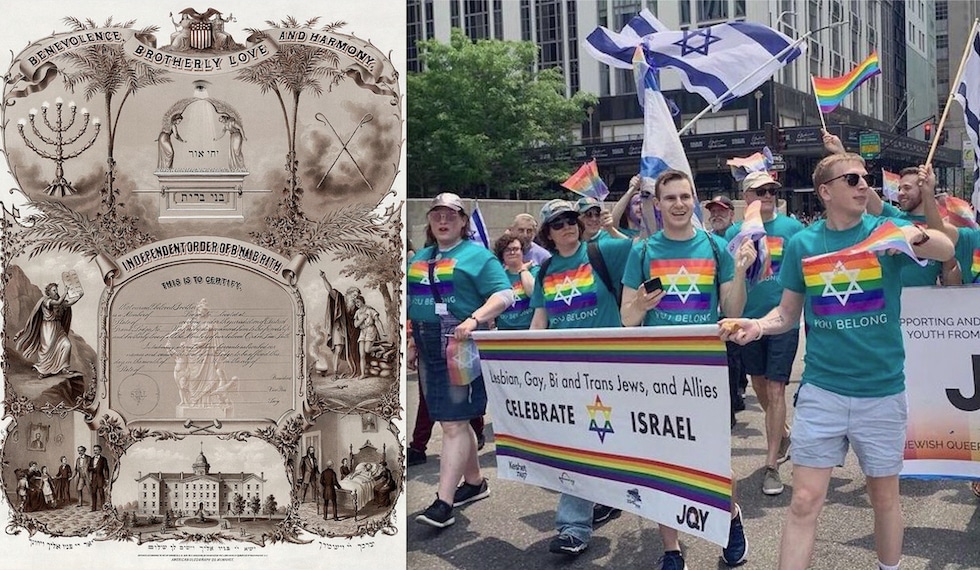 On the cover image a B’Nai B’Rith paper and the Wider Bridge, JQY (Jewish Queer Youth), Keshet, and Eshel march in the Celebrate Israel Parade in Fifth Avenue (New York) on June, 1, 2019

I read we interest the Claudio Resta’s article “Hoshen: Israeli Non-Profit for LBGTQ” on Veterans Today because he face up to two extremely current and complex topics: Israeli culture and the LGBTQ lobby, to which new letters are added every day as well highlighted in a previous post by Kevin Barrett on the controversial “One Love” captain armband fortunately banned from the World Cup in Qatar by Fifa.

I was writing a comment under the article but I realized that it is essential to respond with a broader and more detailed reflection.

Qatar Doesn’t Have Enough Genders to Host a World Cup

If today we still wonder about the strange link between Israeli religious organizations and LGBT propaganda, such as that of the ones for dangerous anti-Covid gene serums or the Weapons Lobby, it is basically due to a poor memory of history which explained in a previous historical inquiry.

If we study and learn the differences among the political Zionist Movement, which control alla strategic position in the masonic Israeli State built by Rothshild-Rockefeller dynasties, and the Orthodox Jews in Jerusalem who take care of the real Hebrew heritage you can answer to the most part of your questions.

The contemporary problems is this: many persons want to judge but only few really know the historical issues.

The falsehood of the Israeli Zionists of Ashkenazi origin (defined by the most expert scholars of Judaism as the “Thirteenth Tribe of Israel” as descendants of the Khazar converts and not of the Israelites) is easily identifiable in their willingness to trade weapons even with the neo-Nazi and satanist paramilitaries of the Azov Battalion.

This begs a tremendous question. Was the Shoah, the Jewish holocaust that only a truly anti-Semitic madman can deny, caused by the Nazis together with the Aske-Nazis to “justify” the birth of the State of Israel?

Their willingness to erase history is clearly visible in the attempt to impose a new geographical map on schools and in the brazen claim to possession of the Golan Heights, condemned by a UN resolution that was mocked by the agreement between Donald Trump and Benjamin Netanyahu on colonial territories.

THE ZIONIST DENIAL OF HISTORY: Israel is Banning Schools from Using Maps that Show its pre-1967 borders

But even more in the sinister attempt to steal this denomination from the true orthodox Israelis, partially succeeded with the occupation of many strategic religious institutions.

If you make confusion to Zionist political Movement and Jews you grow the false-flag of antisemitism.

If you not divide Zionism from Orthodox Jews you find an Oxymoron the tie with Christians.

The big problem is another: the deep link between Mason-Catholics as Biden or cold-Catholics as Trump with Zionist power and, in consequence, with its culture and its masonic beliefs.

«JCC Association of North America and Keshet, the national LGBTQ Jewish nonprofit, have accepted 14 Jewish Community Centers and JCCA independent member Camps from around the country to participate in the JCC Association-Keshet Leadership Project.  B’nai B’rith Camp (BB Camp) is one of the Camps participating at the kick-off leadership summit on Monday, March 12 in New York City».

We can read the on the official website of B’nai B’Rith Camp linked to famous Zionist lodge of Freemasonry in Washington.

«The JCC Association-Keshet Leadership Project is a multi-service program that gathers, trains, provides resources for Jewish institutions and supports them to become more inclusive of LGBTQ individuals and families. JCC Association strengthens and leads the JCC Movement with the goal of advancing and enriching North American Jewish life» they added.

If someone want to Make American Great Again, and so some of the Western countries closely dependent on Washington, have to choose a president who which denies the Masonic roots of the United States Confederacy carved by George Washington and who is completely independent of the B’nai B’rith Zionist lodge in Washington.

This may be the only hope for a true Christian Renaissance in the USA, in harmony with Jews who sincerely share Old Testament values.

The real problem is another.

The events of Abraham Lincoln and John Fitzgerald Kennedy teach that Freemasonry enhanced by the Satanist Albert Pike who killed the unionist president and the New World Order, raised on it by embracing Zionism, which helped by CIA killed the second just as contributed with Mossad to unleash the hell of 9/11, they are willing to use all means to kill anyone who does not agree with them.

Trump kills, Putin and Assad praise Our Lady for Orthodox Christmas in Damascus

This is why a true MAGA can only arise from a true and widespread Christian Renaissance of people who pray to Jesus Christ in order to have the spiritual discernment with which to distinguish weeds from good wheat: that is, Zionism from Judaism.