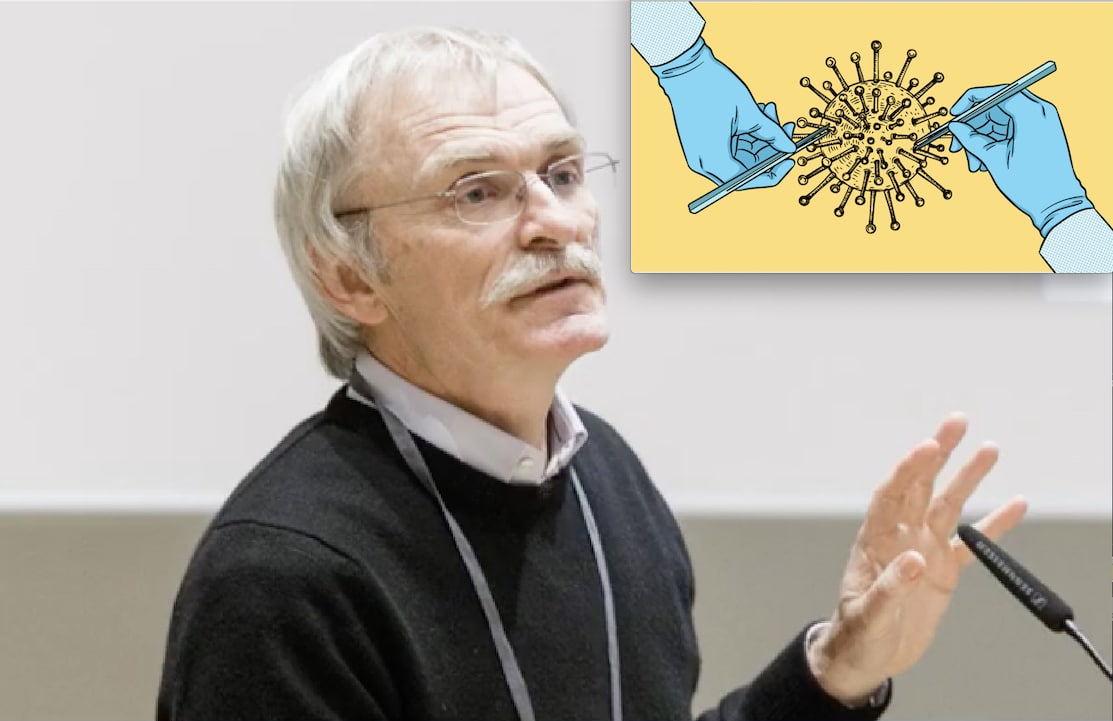 Simon Wain-Hobson is an emeritus professor at the Institute Pasteur, Paris, from which he retired in 2021. He and his colleagues were the first to sequence the genome of HIV, and Wain-Hobson has published more than 230 papers on virology and cancer. Wain-Hobson is the co-founder of two biotech companies working to develop countermeasures against cancer.

Science is about fathoming how the natural world works and dreaming up machines, drugs, and vaccines that make life on the planet a little easier. Understanding and imagination allow scientists to make predictions, which then need to be confirmed through experiment. Yet in dynamic situations that involve multiple variables, as in biology, this can be extraordinarily difficult. As Yogi Berra famously said: “It’s tough to make predictions, especially about the future.”

Many virologists endorse so-called gain-of-function experiments which they claim enable predictions about future pandemics and pro-active preventive drug and vaccine development. This research gained notoriety in 2011 when two groups adapted avian influenza viruses so that they could transmit efficiently through the air between ferrets. If ever released, these novel pathogens could spark a human pandemic. The pandemic potential of these viruses was no accident, it was the desired end game.

Such experiments can pinpoint mutations that can affect pathogen characteristics, yet there is no guarantee that the next pandemic virus will follow any of the genetic roadmaps gain-of-function research has mapped out. A potentially large number of genetic mutations could affect how viruses behave, changing viral traits in a way that could prove hard to predict. While the high bar of scientific proof demanded by today’s science means that reliable results can only be obtained by the unethical inoculation of humans, it would be wise to consider these man-made viruses capable of phenomenal virulence. Gain-of-function research comes at a great cost: making the world a more dangerous place.

Alternative approaches exist. While methods such as causing a “loss” of function of a suspicious mutation are also imperfect from the standpoint of predicting the next pandemic, at least they don’t present the risk of starting one.

A risky way to predict pandemics. To conceptualize the potential harm of gain-of-function research on enhancing pathogens, there is one particularly illustrative example: a 2014 study in which researchers once again morphed an avian influenza virus into one that was highly transmissible between ferrets, this time an ostrich H7N1 strain. It is generally accepted that if a flu virus transmits between ferrets it will do so between humans. So it is worth noting that this presumably human to human transmissible virus did not lose virulence. Around 70 percent of ferrets infected with the novel H7N1 virus by the airborne route had to be euthanized due to their failing condition.

Such a percentage would dwarf the mortality of the 1918 Spanish influenza pandemic, which is thought to have killed around 2 percent of those infected; 70 percent mortality is on par with Ebola. Yet the information about this novel virus is out there on the web; the pdf can be downloaded free of charge.

Gain-of-function experiments, like legitimate work on highly virulent human pathogens, are not without inherent biosafety risks. Lab accidents do happen. Many researchers believe the influenza pandemic in 1977, caused by an H1N1 virus that had not been seen in decades, emerged from a lab somewhere in East Asia. (Others suspect a vaccine-trial mishap.) It then shifted to becoming seasonal influenza and circulated for the next 45 years. If ever there was a lab leak or willful release of a lab-enhanced virus reconstructed from published data, the consequences could be a pandemic.

WUHAN-GATES – 60. NEW SCANDAL INTO WHO. French Co-Chair of Investigative Group on SARS-2 Worked in the China Bio-lab which Enhanced Coronavirus

Despite its risks, the vast majority of virologists have not criticized gain-of-function research for at least three reasons. First, some top-level science administrators have overtly backed it with tax monies. Second, nobody wants to talk about the dark side of science for fear of getting labeled as whistleblowers. As a poet once wrote, “Laugh and the world laughs with you, weep and you weep alone.” Thirdly, many virologists feel that the line between gain-of-function research and basic virology is a fine one, and any regulation would hinder the field. It is true, legislation in science is a blunt tool unless the question at hand is crystal clear, such as with gene editing of human embryos.

Alternative approaches to predicting risky viruses. While gain-of-function research can’t deliver pandemic predictions—there are just too many ways new mutations could impact viral characteristics—what experiments could be performed that would give virologists the information they seek? In present parlance, it comes down to identifying mutations in the genes of an animal virus that allow them to grow well in and transmit efficiently among mammals.

For avian influenza viruses or bat coronaviruses, scientists can engineer mutations in isolated genes for key proteins on the viral surface (hemagglutinin for influenza and spike for coronaviruses) and generate viral pseudotypes. This basically means grafting the surface proteins onto a virus with a harmless track record in humans. Through this method, researchers can identify a catalogue of mutations that can help the pseudotypes infect human cells. Another method involves using single-cycle virus derivatives—viruses harboring a genetic lesion that limits them to a single round of growth. The single-cycle derivatives allow researchers to identify mutations in genes other than hemagglutinin or spike that might help the virus adapt to a new host cell.

Chicken influenza viruses from 13 distinct groups have jumped across to humans several thousand times, although none of these unique events has set up an epidemic. Current virology is capable of analyzing a large number of genes from these viruses without resorting to gain-of-function methods. Recurrent mutations would probably turn up, and researchers could generalize about their effect on viral transmissibility.

What about studying whole viruses? Indeed, virologists should isolate animal viruses from huge numbers of field samples, sequence their genomes, and test their growth on human cells. So long as they are not grown endlessly, which would lead to better adaptation to human cells, or in large quantities, these experiments would provide very useful data. Researchers who found a virus with unique genetic changes could mutate them so that they match a consensus sequence among animal viruses for the viral lineage. That way they would see if the ability to infect and grow well in human cells is lost. Such work is called loss-of-function virology and raises no problems. It has been going on for ages, and is akin to developing attenuated virus vaccines.

Through such experiments, virologists would learn about what was out in the real world and develop some idea as to viruses that could pose a danger to humans. The data could be overlapped with that from viral pseudotypes or single-cycle virus experiments, which would help to further understanding of natural viruses.

Across biology, gene background is important. The same mutation can yield different results in different strains. This indicates that the impact of some of these mutations cannot be easily extrapolated. In turn, this suggests the pool of mutations that could make a virus a pandemic threat could be large, a problem for both gain-of-function research and alternative approaches. There are a host of other highly detailed virological arguments about why pandemic prediction is virtually impossible.

The gain-of-function thesis has been characterized by a belief that virology is akin to engineering; just define the (obviously small) numbers of permutations of mutations allowing a virus to cross over and transmit between humans, and “we’ll figure it out.” Biology and evolution were forgotten.

Viral evolution is not an exercise in engineering. From an evolutionary perspective, the idea that “you don’t win silver, you lose gold” is meaningless; there is more than one adaptation that can allow a species, or a virus to thrive. Even if gain-of-function research finds a mutation that confers some dangerous attribute to a virus, that doesn’t mean that researchers have found the next pandemic killer. Exploring another complex issue, Paul Simon came up with 50 Ways to Leave Your Lover.

It looks like the world is coming out of the COVID pandemic. Billions of dollars will be spent over the next decade on pandemic preparedness, and while we’d love to know the next pandemic virus strain, don’t bank on learning it anytime soon.

Ron Fouchier, a virologist in the Netherlands and one of the gain-of-function influenza protagonists, said in a 2014 conference that it might take him 30 years to work out the genetics of avian influenza transmission to humans. As most of us cannot see beyond two, 30 years was a euphemism for “don’t know.” Gain-of-function research can never deliver on its promise, which is the prediction of the next pandemic flu strain to allow the preparation of preventive drugs and vaccines.

Virologists must stop crystal ball-gazing and get on with the relentless job of understanding and fighting viruses. In collaboration with industry, they’ve already done a fantastic job with SARS-CoV-2 in terms of rapid diagnostics, drugs, and vaccines.

It was never virologists’ brief to make the world a more dangerous place.

Simon Wain-Hobson is an emeritus professor at the Institute Pasteur, Paris, from which he retired in 2021. He and his colleagues were the first to sequence the genome of HIV, and Wain-Hobson has published more than 230 papers on virology and cancer. Wain-Hobson is the co-founder of two biotech companies working to develop countermeasures against cancer.