Damascus International Airport was forced to suspend operations early on Monday after an Israeli missile strike left two soldiers dead and damaged the facilities, the Syrian Defense Ministry has said.

Israeli planes struck the airfield and surrounding areas at around 2:00 am local time, the ministry wrote in a post on Facebook. The missiles came from the direction of the Sea of Galilee, also called Lake Tiberias, located in Israeli territory, around 100 km southwest of Syria’s capital.

“The aggression left two military personnel killed and two others wounded, causing material damage and putting the airport out of service,” the post read.

The Israel Defense Forces have not confirmed the strike, in line with their long-standing policy of not discussing operations outside the country.

Israel has repeatedly attacked Syrian territory since the outbreak of the civil war in 2011, with the aim of targeting Iranian assets. Teheran – together with Moscow – is helping Damascus in its fight against terrorist groups.

During his previous tenure as Israeli prime minister, Benjamin Netanyahu acknowledged at one point that “hundreds”of such strikes had taken place over the years.

Damascus International Airport, located 30 kilometers southeast of the Syrian capital, and an airfield in the city of Aleppo, were hit by IDF strikes several times last year. Syrian authorities have condemned the Israeli raids, saying they violate the country’s sovereignty and international law. 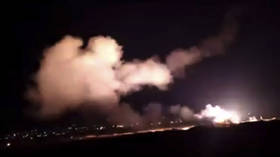