The December 7, 1941, surprise attack on Pearl Harbor thrust the United States into World War II. Just six months later in May 1942, flying new C-47 transport aircraft, the 60th Troop Carrier Group led the way as the first U.S. TCG to deploy to England and the European Theater of Operations in World War II.

Leading the way to victory, the 60th TCG’s first mission—dropping U. S. paratroopers outside of Oran, North Africa—was not only the first combat airborne mission in U.S. Army history but also the longest airborne mission of the entire war. This drop spearheaded Operation TORCH, also known as the Invasion of North Africa, by taking key Axis airfields just inland from the amphibious landing zones. 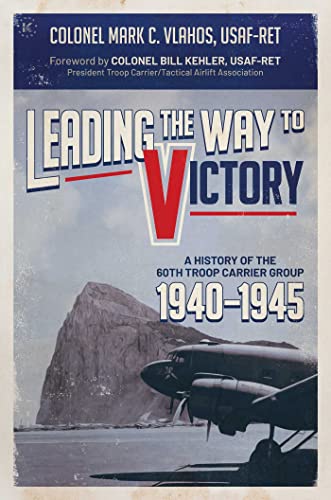 The 60th TCG went on to fly some of the first combat aeromedical evacuation missions and the first combat mission towing CG-4A “Waco” gliders during Operation HUSKY—the Invasion of Sicily. As the new airborne, air land, aeromedical evacuation, and glider missions matured in World War II, the 60th TCG continued to play a major role, paying in blood for valuable lessons learned in the school of hard knocks. The group later flew dramatic missions into Yugoslavia, supporting Partisans as part of the secret war in the Balkans, an episode of World War II history still all but unknown today and dropped British paratroops in the airborne invasion of Greece. The Group was inactivated at the end of the war.

Drawing on official United States Army Air Forces microfilm records, operational records in the National Archives, photographs from both collections, published historical materials, and many personal accounts, author Mark C. Vlahos’ expertly written and highly readable volume are certain to become the standard history and go-to reference for the 60th TCG. This work offers scholars and lay readers alike an authoritative, informative, and engaging saga of the Group’s battles, adversity, hardships, and triumphs from inception through the Allied victory in Europe.

SOURCEBuy Book on Amazon.com
ATTENTION READERS
Due to the nature of independent content, VT cannot guarantee content validity.
We ask you to Read Our Content Policy so a clear comprehension of VT's independent non-censored media is understood and given its proper place in the world of news, opinion and media.