Home Government IN MEMORY OF ASHLI: Killed in Capitol Hill and Forgotten! US have... 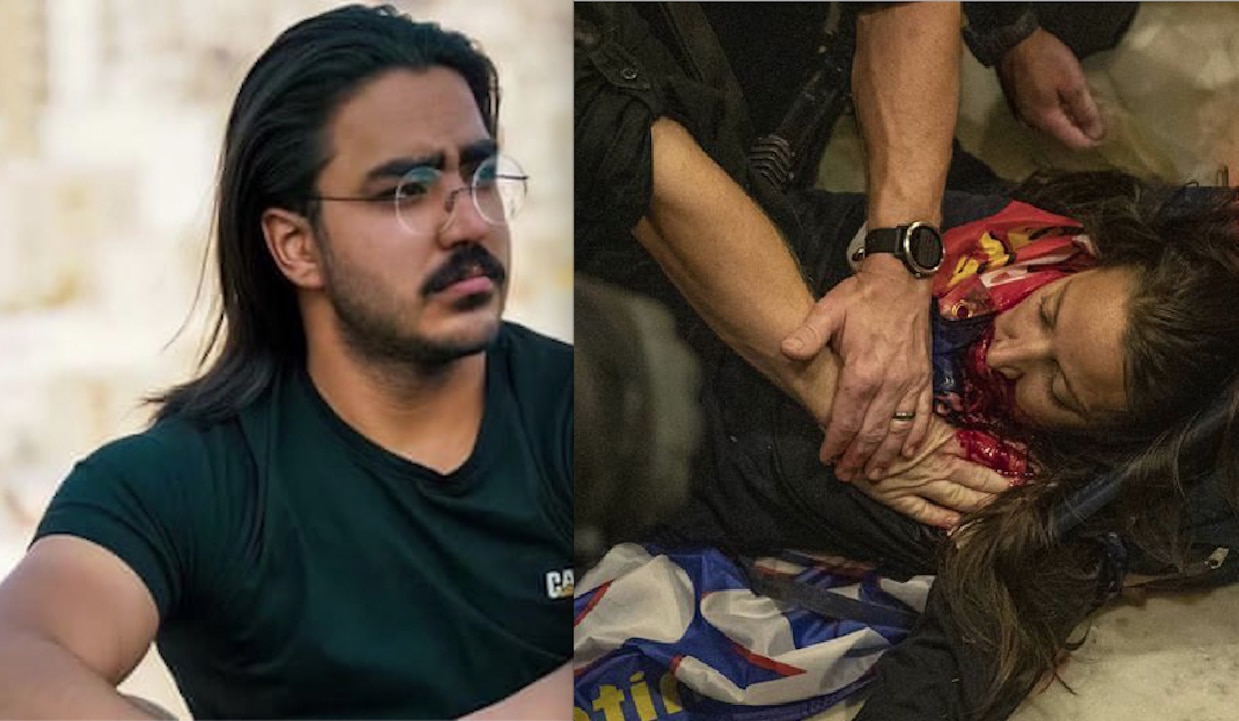 Where is real justice?

In the democratic US where a cop can kill without consequence an Air Force veteran who make the mistake to enter in Capitol Hill, exactly a year ago, to protest agains an evident fraud election for White House?

Or a rioter man who muredered two policemen during the Iran unrest but he wasnt’s killed at the istant. He face to a trial and then was sentecncet to death penalty by hanging?

These are the sad story of Ashli Babbit, 35, Air Force veteran with the only “sin” to be a fervent supporter of the loosing candidate to presidential election. And the tragic end of at the Iranian Majidreza Rahnavard 23 yo.

«Majidreza Rahnavard was sentenced to death by a court in the city of Mashhad, a centre of the protests, for allegedly killing two members of the paramilitary Basij force and wounding four others. The Basij, affiliated with the country’s feared Revolutionary Guards, has been at the forefront of the state crackdown» wrote The Guardian.

«Fears are growing that Iran is preparing to execute scores more protesters after authorities hanged a 23-year-old man from a crane, in a public killing carried out less than a month after he was arrested and following a secretive trial» added the newspaper. So a rioter can kill the policemen of his country?

Which is the end of the Islamic attacker on the London Bridge?

The American veteran Ashli went to demonstrate to support the alleged but well-founded suspicion of a vote fraud in the most important Western Democracy. She was brutally killed with a shot gun, despite she was unarmed.

Before teaching Democratic rules to other countries, US needs to learn them in its soul.

Before exporting Democracy with bloody wars like in Syria and Ukraine, the Washington legacy has to be able to process a rioter, or a little criminal as George Floyd, before kill him.

Otherwise is a democratic state worst than the Islamic integralist republic in which a killer of two cops has the right of a trial (may be conditioned) before his death.

On “Dominion” shady ballots-counter Trump Appeals to Supreme Court (inside judges Barrett and Thomas pestered by Biden) on “Clinton Software”, rejected by Texas

Iran is a nation governed by a fundamentalist theocracy. Anyone who wants to live or go there knows it. Just as he knows that there are dangerous military regimes in Thailand, Myanmar and many African states.

The policy of the USA and the European Union of criminalizing the government of Teheran, which tries to preserve its laws while in many rogue states of the world are exterminated children, nuns, priests for no reason, is really lurid.

Jihadists and Nationalists are Driving Increased Persecution of Christians: 7.600 Murdered in Nigeria only

May be this happen due to the government or the ISIS terrorists are NATO friends as in Libya and in Siria?

May be this happen because in Iran there is a similar plots as the one tried in Lebanon and Iraq by Western Ong for freedom and peace which use the molotov?

This is only geopolitical analysis good for an article.

Department of Justice Closes Investigation into the Death of Ashli Babbitt

«The U.S. Attorney’s Office for the District of Columbia’s Public Corruption and Civil Rights Section and the Civil Rights Division, with the Metropolitan Police Department’s Internal Affairs Division (IAD), conducted a thorough investigation of Ms. Babbitt’s shooting.  Officials examined video footage posted on social media, statements from the officer involved and other officers and witnesses to the events, physical evidence from the scene of the shooting, and the results of an autopsy.  Based on that investigation, officials determined that there is insufficient evidence to support a criminal prosecution. Officials from IAD informed a representative of Ms. Babbitt’s family today of this determination».

«The investigation revealed no evidence to establish beyond a reasonable doubt that the officer willfully committed a violation of 18 U.S.C. § 242.  Specifically, the investigation revealed no evidence to establish that, at the time the officer fired a single shot at Ms. Babbitt, the officer did not reasonably believe that it was necessary to do so in self-defense or in defense of the Members of Congress and others evacuating the House Chamber. Acknowledging the tragic loss of life and offering condolences to Ms. Babbitt’s family, the U.S. Attorney’s Office and U.S. Department of Justice have therefore closed the investigation into this matter».

Despite Iranian rules, American democratic ones don’t gives a chance to a trial…

A shot suddenly happened… As to JFK or Abraham Lincoln!

«The formal investigations into the fatal shooting of Ashli Babbitt by U.S. Capitol Police Lt. Michael Byrd on Jan. 6, 2021, have come to a close. The Department of Justice announced in April that it would not pursue criminal charges, and the Capitol Police have announced that Byrd’s actions were “lawful and within Department policy.” Babbitt’s family has filed a wrongful death lawsuit, and Byrd has now gone public, sitting for an interview with NBC Nightly News» reported Lawfare website.

«Public discussion, however, is ongoing, and in that sphere the shooting of Ashli Babbitt has become particularly polemical. The controversy itself is familiar—policing and police homicides have been under a renewed spotlight since the summer of 2014, and especially the summer of 2020—but the public response to this particular shooting has played out in a unique way».

NEWSWEEK Exclusive Jan/6: Secret Commandos with Shoot-to-Kill Authority Were at the Capitol

«Many pundits and commentators on the right have bucked their general tendency toward police apologetics by celebrating Babbitt, who entered the Capitol wearing a Trump flag as a cape. For example, Fox News opinion host Tucker Carlson has framed the question of Babbitt’s death as whether “anonymous federal agents [are] now allowed to kill unarmed women who protest the regime,” even parroting Russian President Vladimir Putin’s criticism of the death as an “assassination».