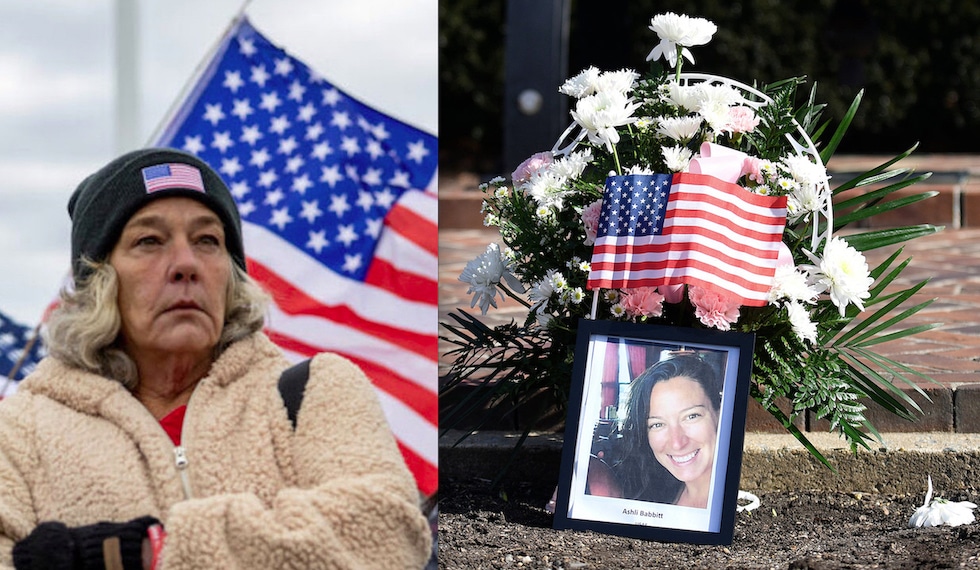 In the most important western nation that defines itself as civil and democratic, it is forbidden to demonstrate for one’s daughter killed without justice

Micki Witthoeft (on cover image), the mother of Ashi Babbit, the American air force veteran who was shot dead for entering United States Capitol Building, the seat of the Congress, was arrested yesterday for the quibbles of violations of traffic laws in front of the Capitol Hill, along with hundreds of other protesters in the unforgettable assault on January 6, 2020.

Below the interview released by mrs Witthoeft, 58 yo, to The Epoch Times.

The policeman who killed him, on the other hand, did not suffer any conviction after a hasty and unfair trial.

For Ashli and the other protestants, as shown in multiple videos, the doors were opened by the same policemen in what would become a judicial trap for the naïve Donald Trump, obsessively focused on contesting through Twitter the electoral results of an alleged fraud perpetrated his opponent in the race for the White House Joseph Biden.

On “Dominion” shady ballots-counter Trump Appeals to Supreme Court (inside judges Barrett and Thomas pestered by Biden) on “Clinton Software”, rejected by Texas

Of those electoral frauds, caused by the Domninion voting system financed by Bill Clinton, imposed by Barack Obama and rejected in various states such as Texas precisely because it could be manipulated, there was ample evidence but the former POTUS Trump did not have the courage to decree the annulment of the elections by obviously imposing martial law to protect democracy.

Out of cowardice he was a three-time accomplice of the New World Order.

First: when he didn’t send the US Army into the hell of protests happened in Minneapolis, artfully unleashed by Black Lives Matter which was financed by Democrat megadonor George Soros, for the probably premeditated killing of George Floyd.

Second: when he didn’t enforce the annulment of the elections.

If he was truly certain, as we are and as was later confirmed by subsequent investigations, that the electoral results had been altered, he would have had the duty to defend American Democracy at the cost of risking his own life.

Third: when he incited his supporters to act in place of his army by taking to the streets.

Among the victims of this incitement to revolution was the former aviator Ashli Babbit.

Surely a fanatic of the Republican MAGA Trumpian movement but certainly much less than the BLM demonstrators who devastated various US cities without serious consequences but even obtaining the public applause of Barack Obama who supported his Deputy Joe Biden together with George Bush for the New World Order plot implemented through the Gates-Fauci pandemic and the Soros-NATO war in Ukraine in an intrigue between Big Pharma and the Arms Lobby, supported by the Rockefeller Foundation.

The White House, during the Biden administration, has manipulated all social and media with the help of the FBI and the CIA as proven by various journalistic investigations and by the revelations of Elon Musk on Twitter.

The incumbent American president has even publicly announced this censorship strategy to protect the dangerous anti-Covid gene serums manufactured by Pfizer, sponsor of the Democrats, and by Moderna, financed by Gates and the DARPA agency during the Obama-Biden administration, for a macroscopic test on the human population used as a free guinea pig for the brand new biotechnology with mRNA vectors and, in all probability, the verification of the impact of graphene oxide for the neurocerebral control of Americans and of all humanity.

If in the face of all this a mother cannot peacefully demonstrate in front of the Capitol for the unpunished killing of her daughter, it means that the Democracy heralded to the world by Washington is definitively dead.

It means that there is a worse regime than that of Iran, where it is condemned to death those who kill the agents during the protests and where the Western media inflate the numbers of dead and rioters arrested who are trained by the US to do so as has already happened in Lebanon, Syria, Ukraine, Venezuela, Iraq and Hong Kong.

Today a new form of government reigns in the US: the theocracy of censorship imposed by the New World Order.

Let’s get ready for the apocalypse and the next moves of the new antichrist Biden.

by Mimi Nguyen Ly – originally published by The Epoch Times

The mother of Ashli Babbitt—Micki Witthoeft—was detained near the U.S. Capitol on Friday afternoon and was charged with violating two Capitol traffic regulations.

The detainment took place during a demonstration on the second anniversary of the death of Babbitt and three other Americans on Jan. 6, 2021. Witthoeft, 58, told The Epoch Times she was there to honor her daughter, who died two years ago after being shot by U.S. Capitol Police (USCP) Lt. Michael Byrd.

Witthoeft was arrested around 1:45 p.m. local time by officers from the U.S. Capitol Police and charged with having violated two traffic regulations (pdf)—§16.3.20 Obey An Order, and §16.3.40 Blocking And Obstructing Roadways, the USCP announced in a release.

“As is typical for this charge, Ms. Witthoeft was processed and released this afternoon after being given a citation to appear in court at a later date,” the USCP stated.

The USCP stated that the group “did not have a permit to demonstrate on Capitol Grounds.”

“Officers established a clear police line to prevent the group from moving further west on Independence Avenue, SW,” per the release. “The officers and officials told the group to get out of the road or the group would be arrested. The sidewalk was open.”

The USCP said that Witthoeft was “given multiple warnings to get out of the road,” but instead of doing so, she “refused to leave, turned around with her hands behind her back, and asked to be arrested.”

‘I Was There to Honor My Daughter’

Witthoeft told The Epoch Times that she and the group saw the Capitol grounds had been fenced off.

“They were letting people in but they would not let us in because we had flags, so I chose to walk down the street that was blocked off, with my flags,” she recounted.

“When we turned the corner, more of the sidewalk was blocked off and our option was to walk on the side fence, or to cross the street where we could not lay flowers. So I chose to walk along the road so I could lay flowers for the four people that died that day—my daughter being one of them.

IN MEMORY OF ASHLI: Killed in Capitol Hill and Forgotten! US have to Defend Iranian Rioters & Cop-Killers…

“When I did not move out of the road, I was arrested and cuffed up by a really angry, aggressive Capitol Police officer, who left wounds on my arm from handcuffing me.”

The video showed that at the time, Witthoeft was holding a rose and was being told to move to the sidewalk. Another woman was with her and was holding a sign with Ashli Babbitt’s name on it. The woman was trying to talk to one of the officers, but the officer told them: “You’re not obeying traffic laws, you can move to the sidewalk or you’re being placed under arrest. … We’re not discussing it. Sidewalk, now, or you’re under arrest, it’s that simple.”

Here’s how Zuckerberg Bought the US elections. To make Biden win against Trump $ 400 million at the Electoral Offices

Following the officer’s remarks, Witthoeft was seen handing the rose she was holding to the woman. She then turned her back to the officers and held two hands behind her back, as though ready to be handcuffed.

When asked what she was thinking when she decided to be arrested instead of moving out of the road with the other demonstrators, Witthoeft told The Epoch Times: “I was there to honor my daughter, and they were trying to make that impossible by their barricades and their failure to admit us to the Capitol grounds—and they were admitting everybody around us.

“I just wanted to lay some flowers for my daughter, and for Rosanne, Kevin, and Benjamin.”

Four Americans died on Jan. 6, 2021, amid the mayhem that took place that day on Capitol grounds—Babbitt, Rosanne Boyland, Kevin Greeson, and Benjamin Phillips.

Babbitt’s death was ruled a homicide. Paul Sperry and RealClearInvestigations in late 2021 identified Byrd as the person who shot Babbitt prior to her death.

The deaths of Greeson and Phillips were determined to be due to natural causes. Meanwhile, Boyland’s death was ruled as an accident, but video unsealed in December 2021 showed that she was struck by a police officer prior as she lay unconscious near the Capitol building.

The joint session of Congress on Jan. 6, 2021, was temporarily interrupted when a sizable group of protesters entered the Capitol building and its surrounds. Outside were thousands of other mostly peaceful protesters who had gathered in Washington on the day to express concerns about election integrity.

As of late December, more than 900 individuals have been dealt charges by the Department of Justice, accusing them of having committed federal crimes on Jan. 6, 2021. More than 480 of them have pleaded guilty to one or more charges. Dozens of Americans continue to be held in prison without trial.

by Mimi Nguyen Ly – originally published by The Epoch Times