One of the most widely ridiculed and memorable gaffes in the history of the United States Presidency occurred in Japan on the evening of January 8, 1992, when President George H.W. Bush vomits on the Prime Minister of Japan.

Prime Minister Kiichi Miyazawa was hosting a dinner for the president in honor of his state visit. Bush, who was 67 at the time, appeared to be in fine health, playing doubles tennis with the Emperor of Japan and his son that morning. During the dinner, however, Bush suddenly fell ill. He leaned forward, then fell to his side, vomiting into the lap of his host, the Prime Minister.

Bush then fainted as his wife Barbara, his aides, and members of the Secret Service swiftly attended him. He was revived within moments and was able to leave the dinner under his own power, apologizing for the incident. 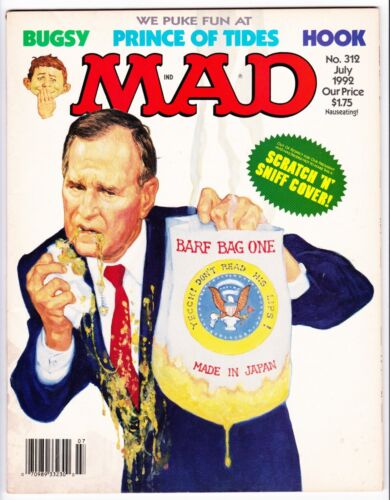 Doctors later stated that the president had suffered acute gastroenteritis and felt fine after taking an anti-nausea drug. He resumed his normal schedule the following afternoon. Nonetheless, the incident and the blurry video of Bush’s collapse received enormous attention in his home country. Saturday Night Live spoofed the incident, comparing it to the assassination of John F. Kennedy.

Though he refused to make hay of it publicly, Bush’s challenger, Bill Clinton, likely benefitted from the incident. Clinton’s relative youth and vitality were key to his public image, and Bush’s very public illness only served to reinforce the differences between the two men

Bush lost his re-election bid the following November, although he would live to see his son, George W. Bush, serve two terms as president. Even today, the time Bush vomited on the Japanese prime minister holds a special place in the annals of American presidential goofs. It also entered the Japanese lexicon—the colloquial phrase bushuru, which roughly translates to “to pull a Bush,” became a popular slang term for vomiting in the wake of the incident.